It’s almost impossible for a country to shake off certain atrocities that have affected it in the past, which is the case for Rwanda after the 1994 genocide. It is a dark patch that has become etched into the country’s identity, and Father’s Day is a film where the people are still being affected by this national trauma, while also fighting their own demons such as heartbreak and psychological suffering at the hands of dominating male figures. Directed by Kivu Ruhorahoza 10 years after his feature film debut Grey Matter, this micro-budget film also deals with the lasting repercussions of the pandemic (as you can see with the wearing of masks) but as one character explains, “we blame everything on this virus, but it only shakes things that were not solid to begin with,” which speaks perfectly about the film.

Set in Kigali, Rwanda’s capital, Father’s Day explores the lives of three separate people and their relationships with the men in their lives. The first story features Zaninka (Mediatrice Kayitesi), a struggling masseuse who has been left devastated by the premature death of her teenage son. She must also deal with her miserable marriage to a man whose get-rich-quick schemes and superiority complex all come at Zaninka’s expense. The focus then shifts towards Mukobwa (Aline Amike) as she must decide whether or not to be an organ donor for her ailing father, a man whose terrible past causes her a moral dilemma. And finally, the story of Kadogo (Cedric Ishimwe) a young boy raised by his father Karara (Yves Kijyana), a bullying and manipulative small-time crook who becomes very unpredictable.

The three stories are very different but each of them involves similar questions of morality in some form or another. Should the daughter save her father even though his wicked past (something that is unknown to us and left up to interpretation) troubles her greatly? Is the mother able to carry on living with her leech of a husband and his sense of entitlement? 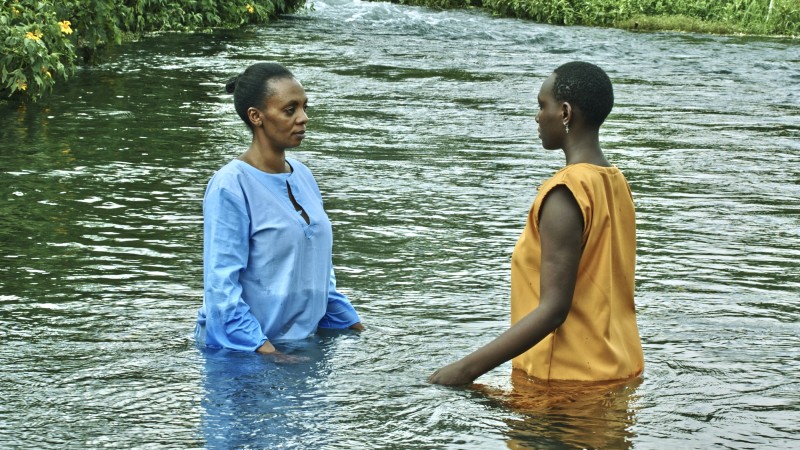 And how far will the father push his son before it eventually comes back to bite him? Although there is some interloping of the characters, they are not reliant on each other for success, something that you see in films like Iñárritu’s Amores perros or countless other multinarrative pieces of cinema. Ruhorahoza allows time for each tale to develop and breathe, to stand on their own two feet before they even consider crossing.

There are some glaringly obvious plot holes that never get answered though, and they will leave you puzzled long after the film has ended. Each tale suffers due to a lack of detail at crucial moments, it leaves the film feeling loose and a tad confusing, possibly even largely unfinished which is crazy to think considering its exerted length. But I guess the most bewildering decision was to only have two out of three stories linked, leaving the other standing alone in the distance and feeling left out.

It is a very morbid film with gritty and emotional concepts and a washed colour aesthetic that gives shrouds it with an obvious rawness. And although raw is good, with the atmosphere and the surprisingly excellent but unkempt acting within each tale mirroring this perfectly throughout, it also means that it’s far from perfect. But take away all those scenes of pointless filler where not much happens, as well as the uneven plot that puts a slight dampener on the overall experience, and Father’s Day becomes a gritty and very bleak examination into the lives of some troubled individuals that delivers with powerful authenticity.