This road movie of sorts explores the life of Sri Lanka’s forgotten son. First of all, who was Geoffrey Bawa and what is his legacy? Geoffrey Bawa was a Sri Lankan architect who was among the most influential Asian architects of his generation, and his lasting gift upon the world – his shining glory as it were – the ‘lost’ garden of Lunuganga which is hidden away from prying eyes. Premiering at this year’s Raindance Film Festival, Bawa’s Garden is an immersive and gracefully shot film that harnesses the magic of Sri Lanka and its people to achieve its goals.

It is a very subtly experimental film that uses a variety of classic documentary modes to represent its story. There is no primary formula that structures it, as the different styles are intertwined into one package, but it does follow very participatory and expository ideologies as we follow the unnamed protagonist on a journey across this magical land in search of the garden and even her own mysteries too, while a voice manifests as an omnipresent, omniscient, and objective force over the footage and offering in-depth knowledge about the land and the life of Bawa himself. But with context comes information, and what better way to learn than from the people who knew the man best: his friends and peers who gift us with some very enlightening interviews that only assist us in determining the personality of this man.

While it is those things, it’s also a very poetic experience, one that is built up around profound audio-visuals and gorgeous cinematography – it’s no wonder this film is up for the Best Cinematography award at Raindance, along with its Best Documentary Feature nomination. It shouldn’t be understated how stunning some of this footage really is, it’s one of the best-looking documentaries I’ve seen for quite some time, and it stands head and shoulders above anything else that is seen in the film. 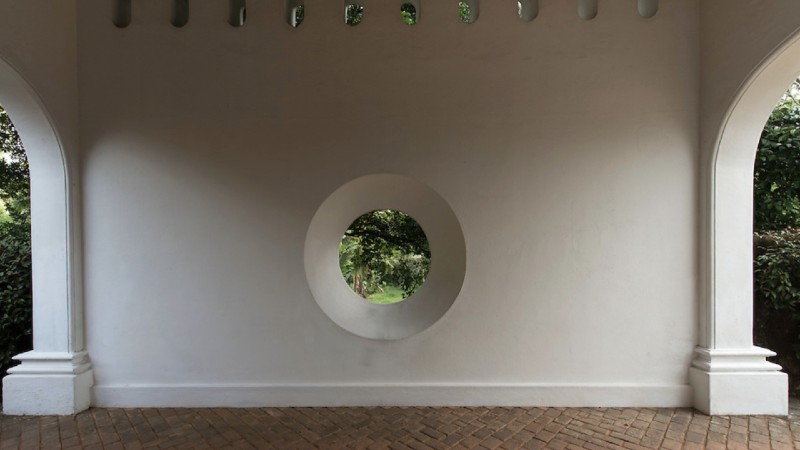 Due to how it was filmed and edited, there are moments when it doesn’t even feel like a documentary, but with it also being very slow and tranquil, you could be mistaken for thinking this to be an unrelenting drama with little to no substance, as we aimlessly follow this actor’s movements. It’s all about the experience though, we need to be situated in the environment and immersed in the subject, and for the most part, it does exactly that – it’s a very unusual concept but incredibly hypnotic, nonetheless. Could an argument be made to say that this film is almost a literal representation of an architectural film? With it being composed of different styles and techniques, while being formed over time, and just like a gorgeous piece of architecture, like so many that we see in this film, you would have good reason to think that it would be a film that would only get better with age.

The qualities of this film are there to see; director Clara Kraft Isono has weaved together a collage of stories, landscapes, styles, and techniques that is quite simply a joy for the senses. Even though the film slows right down to a halt at times, there is enough creative substance to leave a lasting impression. And here’s the thing, if you didn’t know anything about Geoffrey Bawa beforehand, then you definitely will now, and that is the film’s greatest triumph.