"Filthy genius movie"
A married detective investigating the death of a climber becomes obsessed with the victim’s wife, who looks increasingly like the dead man's murderer – out in cinemas from Friday, 21st October

South Korea. City-based detective Hae-joon (Park Hae-il from The Fortress, Hwang Dong-hyuk, 2017; The Host, 2006, Memories Of Murder, 2003, both Bong Joon ho) is married to a science nerd (Jung Yi-seo) who works at a nuclear plant in the seaside town of Ipo. Whatever sexual or romantic energy once existed between them has long since evaporated. She tolerates sex with him once a week on the grounds that research has shown it’s good for you and keeps you sharp, but she doesn’t appear to enjoy it much, going through the motions of a necessary chore. There doesn’t seem to be much more to this marriage for either of them than keeping up appearances. She lives and works in Ipo while he spends most of his working time away in the city, often going on nighttime stakeouts to observe suspects and forget about his habitual insomnia.

Which means that when Hae-joon finds himself investigating a case in which skilled amateur climber Ki Do-soo (Yoo Seung-mok from The Gangster, The Cop, The Devil, Lee Won-Tae, 2019; also The Host, Memories Of Murder) has fallen from a great height and the dead man’s Chinese-born wife Seo-rye (Tang Wei from Lust, Caution, Ang Lee, 2007) is a murder suspect, the detective is much more interested in her as a romantic subject than as a possible perpetrator, and this sensibility clouds his judgement. Eventually the case is closed, and she gets off scot-free, but the more time Hae-joon spends with her after this, and the more we see of her, the more likely it seems that she was the murderer.

The above constitutes what one might call the film’s first act. This first act and the subsequent second act, in which certain plot elements recur, recalls Vertigo (Alfred Hitchcock, 1958). In the second act, Hae-joon has moved to the seaside town presumably so that he can spend more time with his wife. One day the couple are wandering though the fish market where they run into Seo-rye, who by coincidence has likewise moved into the area, with her new and shady financial consultant husband in tow. The latter seems more keen than he should be to talk to Hae-joon’s wife and leaves her his card. 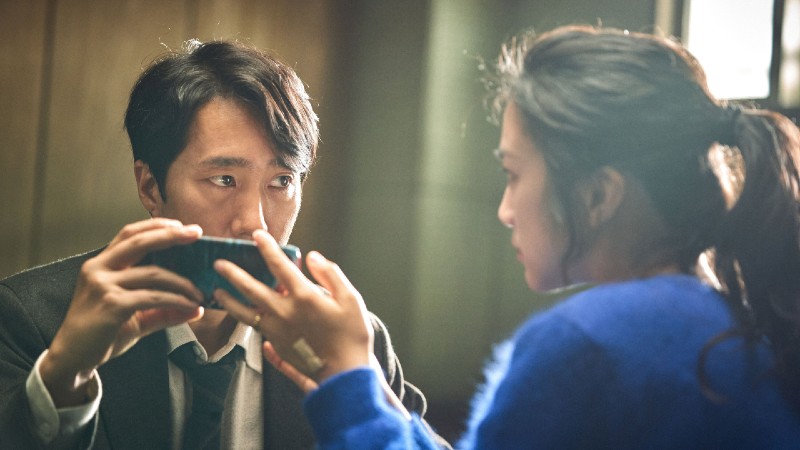 It turns out this second husband has a history as a scam merchant and has made a lot of enemies along the way. Before we get to know him much more, however, he turns up dead in his swimming pool. His wife could be responsible, but there is another suspect too, a victim of his sharp business practices, who looks more likely.

Rather than allowing all this to unfold in straightforward linear narrative fashion, director Park works in terms of layers and constantly jumps back and forth throughout. This is at once enthralling and infuriating to watch; enthralling because of the myriad of painstakingly worked out details piled on top of one another, infuriating because there is so much going on at any one time that it’s easy to lose track.

Things might make more sense on a second viewing, but equally they might simply prove as confusing as they did first time round. Without a second watch, it’s impossible to say. Nevertheless, it’s a very rich film, thoroughly engrossing; one to which, having seen it once, you’ll want to return.

Decision To Leave is out in cinemas from Friday, 21st October.

The Gangster, The Cop, The Devil

Better the devil you know. A no-nonsense cop and a ruthless gangland boss join forces to catch a serial killer in this South Korean thriller - now available on VoD [Read More...]