"Greasy movie"
Young woman goes through the wringer as she infiltrates the all-male, illegal world of dirt bike "rodeos" in France - from the 66th BFI London Film Festival

Known mostly as “The Unknown”, and occasionally as Julia or Lucie, indeed very little is known about our protagonist (played by Julie Ledru). We learn nothing about her family and her background; instead we’re briefly told that the quietly wild and untameable young woman comes from Guadaloupe. She has a passion for dirt bikes, a sport almost entirely dominated by men. Yet we have no idea from where her passion emanates. She is curt and assertive, often winning people’s affection by dropping in a cheeky smile immediately after she does something very naughty (which often includes breaking the law). The Unknown is fearless. She knows no boundaries, both physical and metaphorical ones.

“Rodeo”, Spanish for cowboy competition, is slang for the illegal urban gathering where motorbike riders show off they daredevil skills. The first third of Rodeo is filled with adrenaline-inducing scenes of incredible acrobatics. Riders ride so close to the tarmac, their bikes tilted almost 90 degrees. They swerve and spin without warning. They find both pleasure and social recognition in the extensive brushes with death. These are the film’s most powerful moments. Then a biker suffers an accident, and Julia find herself becomes embroiled in a number of problems. She is homeless, she has no partner, no family. She asks to live in the bike shed, and then with the wife of the big boss and his young child (the man himself is in prison and never to be seen). 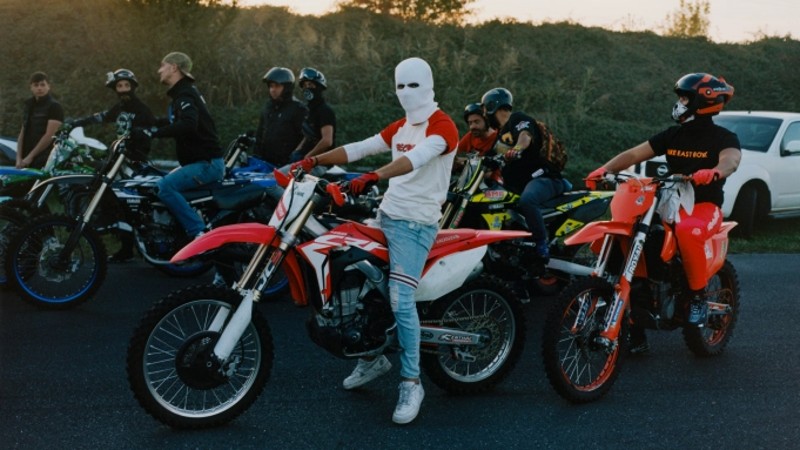 Ledru blends female beauty and physical strength. She has the mixed race features of Brazilian über-actress Sonia Braga. One of the problem, however, is that she never engages in any of the stunts. The Unknown remains almost entirely rigid on her motorbike all throughout the movie, a posture incompatible with indomitable character. Instead focusing on her riding talents, the director opts to concentrate on the Unknown’s emotional trials and tribulations. This is only partly effective. A woman so passionate about riding (to the extend she devotes her entire life to the sport) should be far more skilled. The outcome is that it is indeed the males who end up dominating the first part of the film.

I also found the ending disappointing. Perhaps because it’s a little too ambitious, with the director throwing in a number of unnecessary narrative elements (death, fire, afterlife, etc). Overall, this is a beautiful film that could have done with more audacity on tarmac and a little more circumspection in its final denouement.

Rodeo has just premiered at the 66th BFI London Film Festival. There will be a theatrical release in 2023.