What begins as a love letter to the Andes Mountain range, this historical “Cordillera” that engulfs Chile from the East, soon turns into a tragic story about the harsh realities this country has faced over so many years. Documentary filmmaker Patricio Guzmán returns to this native homeland on a quest to document his birth country and complete a trilogy of modern-day films, with The Cordillera of Dreams being considered the third instalment after Nostalgia for the Light (2010) and The Pearl Button (2015). Like his previous films, Guzmán introduces us to such natural beauty in the form of the Cordillera, something that has been etched into the culture of this country; it is a part of the people, and it possesses so much gorgeous and natural beauty, but it should also be respected and nurtured.

Patricio Guzmán makes it known early on that he fled the country 40 years previously when the military dictatorship took over the government and began laying out their vicious laws, but it’s never stopped Guzmán from telling his or the stories of others. A man who calls this country home will never stop thinking about it, and he uses the famous mountain range as a focal point for the film’s narrative in the most metaphorical way he could. It follows a very poetic structure, with a juxtaposing journey of storytelling and gorgeous drone footage of this incredible Cordillera that just needs to be absorbed.

The Andes Mountains are front and centre – a prominent image for the film throughout– to show Chile at its glorious best, staying largely intact after all these years, whereas Santiago has been ravished by a tyrannical reign. The images of this gargantuan landscape are guided by a tranquil and calming voiceover (performed by Guzmán himself) that offers a very gentle insight into the film, the story, and the feelings of a native who has watched through a thick piece of glass for 40 years. It seems as if Guzmán was experimenting with a new drone as well because the film is littered with exquisite footage that lifts the film and creates a visual experience of stunning quality, and it is very much needed to invigorate some life into the film when things start to flag. This is a collage of several ideas and techniques, but sometimes the film flounders as it becomes stuck in two minds about what it actually wants to include. 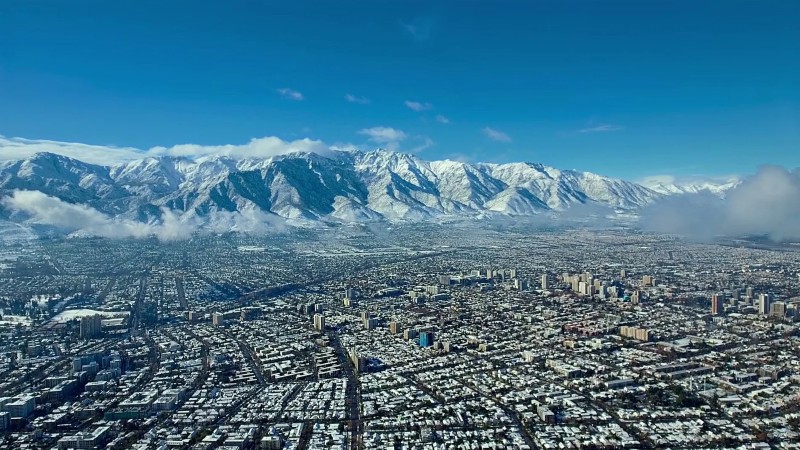 The dictatorship under Augusto Pinochet began soon after the previous Marxist reign of Salvador Allende was overthrown by the military coup d’état. And for an event so torrid, so full of pain and acts of pure evil, it needs to be seen to be believed, and the archive footage of the heinous crimes conducted by the military is terrifying – it puts things into perspective, but even then, we only see the events that were possible to film, what happens behind closed doors? But there were filmmakers who stayed behind to capture as much as they can; men and women like Pablo Salas who are not afraid about their own well-being, who are always questing for the perfect shot, so something can be documented at least, such was the power of this military control and all of its evil propaganda.

But it is the interviews with people like Salas and many of the other creatives that introduce themselves to us that laden this film with detail, even if it does suffer from being a little dialogue heavy because of it. With this film being about a particularly turbulent time, true retellings allow for a better understanding, but it works much more effectively as a piece of visual art, with all the included philosophy attached to it, and the metaphorical message that travels from the beginning right until the end. The act of poetic storytelling is enough for this film’s message to be inhaled because when you use camera footage as good as this and accompany it with such a calming presence, it becomes something more than just a documentary… it evokes a mixture of powerful emotions. But as the finale in a trifecta of thought-provoking films about the glorious Andes, and a tumultuous period in Chile’s long history, The Cordillera of Dreams is a stunningly powerful curtain closer for Patricio Guzmán.

The Cordillera or Dreams is out on BFI Player and also in selected cinemas on Friday, October 7th.