"Greasy movie"
A family of Catalonian farmers scrabble to find a purpose in their existence as they face imminent eviction - moving tribute to rural traditions is in cinemas on Friday, January 6th

Hailed as “the Spanish film of the year”, and the first such movie in four decades to win the much-coveted Golden Bear (the last one being Mario Camu’s La Colmena, in 1983), Alcarras portrays the tribulations of the Solé family as they face the biggest challenge of their lives. They live in a large farm in the titular Catalonian municipality, and their existence is entirely devoted to growing peaches. The trade is as deeply rooted into the heart of the family as the fruit trees into the fertile soil of the mountainous region. Various generations inhabit one single farmhouse at the heart of the plantation. Their traditions are decades-old. Perhaps centuries-old. But this is all about to change.

Grandpa Rogelio (Josep Abad) reads an eviction notice to the incredulous family members. His son Quimet (Jordi Pujol Dolcet) blames the old man for the tragedy because he never registered the land deeds at the local notary, allowing the greedy Pinyols to take control. The teenagers and small grandchildren carry on playing, prancing around and dancing to pop music. They remain mostly oblivious to the dangers and the uncertainties of the future. The family can scarcely conceive their lives outside their tiny and yet firmly structured world. The prospects of vacating their property are unfathomable yet seemingly inevitable.

Instead of concentrating on the legal technicalities of the struggle between tradition and modernisation, Alcarras is instead driven by a persistent sense of belonging. The family are physically and emotionally emotional attached to the land and the farmhouse within. The entire film is dotted with trivial actions bursting with authenticity. It opens with the children driving an abandoned car as if it was a spaceship. Relatives throw each other in the swimming pool. Adult males pour wine directly down their throat during a boisterous drinking competition. The camera swiftly travels through the peach trees, capturing the grazing cows and rabbits gently crossing the fields. Everything tastes and smells of countryside and tradition. 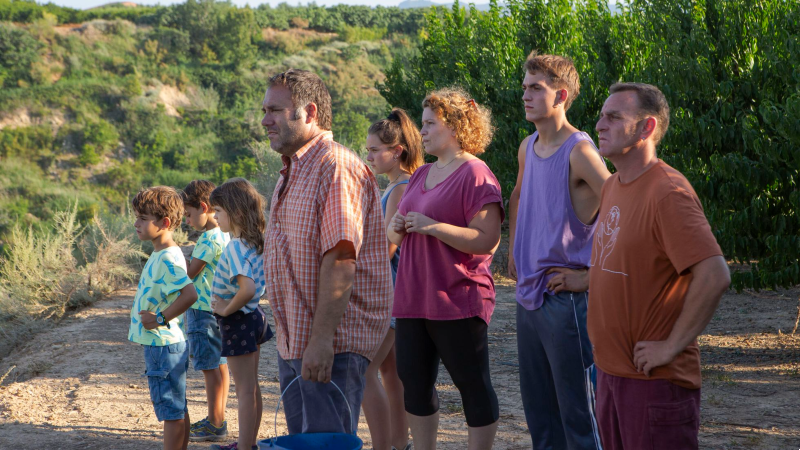 This fragile equilibrium is disrupted by moments of intense tension. The legal owner of the land, wealthy business Joaquim Pinyol (Jacob Diarte), digs up the trees and install solar panels in the farmland, triggering a violent reaction from the family. The price of each peach has been driven so low (just €0.15) that their production has become unviable. The Solés and other local farmers protest with placards, chants and also by dumping a lorry loaded with peaches on the streets, and then crushing the fruit with the wheels of the vehicle. A symbolic gesture of self-immolation. The teenagers take the matters into their hands, too: they lay dead rabbits outside the door of their rich tormentors.

Despite winning the prestigious Golden Bear at this year’s Berlinale, Carla Simon’s sophomore feature, which was written by the director alongside script supervisor Arnau Vilaro, is vastly inferior to her debut Summer 1993 (2018). The new film contains too many prominent characters, preventing the filmmaker from deep-diving into the individual mindsets, while also convoluting what could have been a fairly straightforward plot. The outcome is a far less visceral drama, more concerned with the collective issues of a community than with the subtle nuances of each character, and the psychology of the leads. What both films have in common is the outstanding performance from the non-professional child actors, and a palpable sense of rural realism.

Alcarras is entirely spoken in Catalan and it became the subject of an unlikely controversy when it showed in Catalonian theatres earlier this year. Nationalists criticised the presence of Castilian subtitles because they believe that all people living in Catalonia should be fluent in the regional language. It isn’t just the Catalonian farmers that are passionately attached to traditional values. Both land and language are integral elements of a people’s culture.

Death through the eyes of a child: Splendid autobiographical drama investigates grief and confusion of six-year-old Spanish girl who lost her mother to Aids - on Mubi on Thursday, January 5th [Read More...]