"Dirty gem"
Mia Hansen-Løve's tale of a young widow, her married love and and her ailing father is bursting with humanity and sensibility - from the 26th Tallinn Black Nights Film Festival

Written and directed by 41-year-old French filmmaker Mia Hansen-Løve, One Fine Morning centres on the young single mother and interpreter Sandra (Léa Seydoux). She lost the father of her now eight-year-old daughter Linn (Camille Leban Martins) five years earlier, and – despite her stunning looks, somewhere between young Jane Birkin and Tilda Swinton – has not had any romantic encounters since. One day she “accidentally” kisses her friend Clément (Melvil Poupaud) and they immediately start a passionate romance, despite the fact that the male is married and with a child of a similar age. Meanwhile, she helps to cares for her 60-something father Georg (Pascal Greggory), who suffers from a rare degenerative disease called Benson’s Syndrome.

Georg’s condition quickly degenerates, forcing his daughter and his somewhat absent partner Leila to place him in a nursing home. Just a year earlier, he was a fully active philosophy professor, but now he can barely see and recognise people. His memory is also failing him: he asks his daughter about her “children” despite the fact that she only has one offspring. It suddenly dawns on Sandra that her father is no longer entirely there. In fact, she feels his presence more intensively when she’s surrounded by his books than when she’s in his company. “The books are his soul”, she explains to the little and yet very clever Linn. The pain of finding a new home for his extensive library is as intense as the pain of seeing her relatively young father increasingly aloof and disconnected from reality.

Hansen-Løve’s representation of age is particularly moving. The film is dotted with powerful little moments and remarks. Georg’s 98-year-old mother still lives by herself and – despite her extremely frail body – still does most errands on her own. These include going to the doctor but also going to the hairdresser’s. She is not not embarrassed to use a wheelchair, and she cringes at the thought that people should feel sorry for her. The contrast to her son couldn’t be more pronounced. The realisation that he’s losing his cognitive skills becomes apparent while listening to his favourite composer Schubert. He suddenly understands that his passions in life will gradually vanish along with his memory, his sight, his ability to walk and eventually his own life. In another touching scene, Sandra asks a nurse to help his father to use the toilet because she feels very uncomfortable. The doting nurse explains that she helps her very own parents to clean themselves, and that such ability is a real gift. Her attitude is both affecting and humbling. 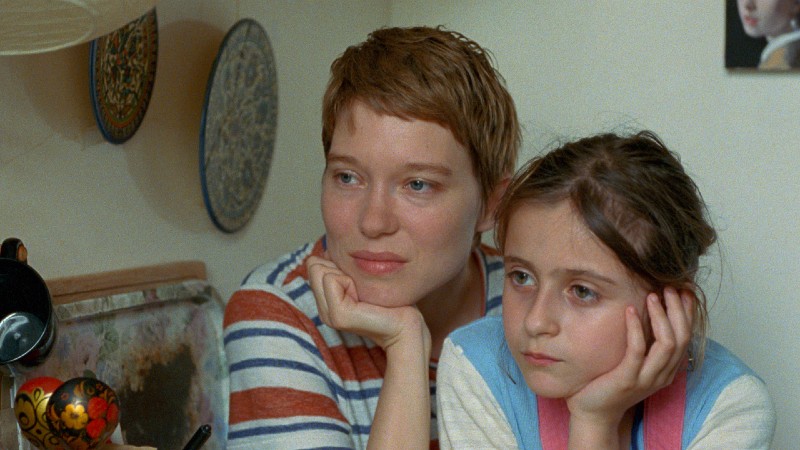 The romance with Clément is very intense but also turbulent. The man is split between his wife and his love. He drifts back and forth between the two, but not as a selfish, toxic male would. He is honest to both women about his sentiments, and genuinely split between the two. There are no villains in One Fine Morning. Like the film title suggests, love could happen to anyone any given day. As could a terrible disease as the one that has befallen her father.

The director’s firm hand and robust script is supported by auspicious performances. Seydoux is extremely convincing in the skin of a woman grappling with love and loss. Her emotions are candid, her suffering palpable. She’s kind yet not without limitations. In one very brief yet crucial scene, her father wanders on his own the corridors of the empty and soulless nursing home (the latest of the many where he has been placed), nervously searching for his partner Leila. Instead of aiding him, Sandra simply leaves in silence. Seydoux successfully conveys both strength and powerlessness. An accomplished female actor in the hands of a consummate female filmmaker.

One Fine Morning showed at the 70th edition of the San Sebastian Film Festival/ Donostia Zinemaldia, when this piece was originally written. It premieres in the UK in October as part of the BFI London Film Festival. It also shows in November at the Tallinn Black Nights Film Festival. DMovies attended all these events.