"Dirty gem"
A devoted literature teacher confronts a dangerous drug trafficking network in order to rescue his students from exile and even death - Argentinean drama with outstanding production values is in cinemas on Friday, January 20th

Lucio (Juan Minujin) loves his job as a substitute literature teacher in a lower-class public school in the rough outskirts of Buenos Aires. He has replaced his ailing father, known only as El Chileno (Alfredo Castro), a leading educator who has earned himself a sterling reputation for his decades-long struggle against youth poverty and criminality. The problem is that Lucio lacks his father’s charisma and he consistently fails to engage his students – most of them from dysfunctional families and rough backgrounds. He talks passionately and persistently about the importance of literature to no avail, without ever eliciting any significant reaction from his students. At first, it seems that these young people have far more mundane interests and lack any intellectual impetus whatsoever. Despite his repeated efforts at forging some degree of intimacy, the prospects of engagement remain elusive.

One day, the police raid the school after some drugs are found in the bathroom. A large amount of clonazepam and cocaine is found in the possession of various students, with four of Lucio’s pupils and their respective families being personally implicated. What started out as philosophical movie suddenly descends into a drug trafficking thriller. Lucio seeks to help his despondent students from persecution and potential death. A drug lord retaliates, openly threatening Lucio by singing a song about death and punishment while both man urinate in the building’s precarious toilets. But Lucio is adamant. He wants to honour his father’s legacy and rescue his students, whether this means embracing them back into his class or taking them abroad to neighbouring Uruguay. 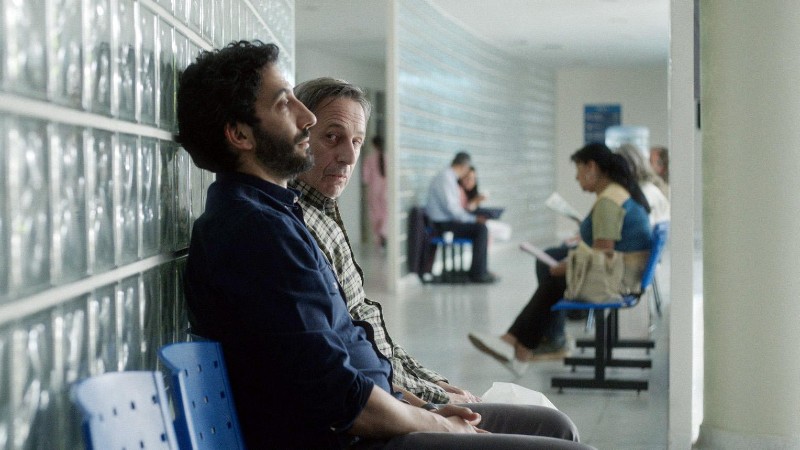 The once peaceful school environment becomes very tense. The police becomes conspicuous. They daily identify and every person who enters the building. A police officer is recruited to watch Lucio’s classes. Paradoxically, such intervention brings Lucio closer to his students, as both struggle to carry out their duties (teaching and learning) under such strenuous conditions. Parallel to this, the health of Lucio’s father continues to deteriorate, as does his relationship to his perky and bright 12-year-old daughter and partner. The young and well-meaning man is at the verge of a mental breakdown. This is evidenced when he desperately breaks into hospital and locks himself with his father in the intensive care unit.

Diego Lerman’s seventh feature film boasts a magnificent cinematographer signed by Polish DOP Wojciech Staron. The images are dark and yet never gloomy. The suburbs of Buenos Aires exude the poetry of the ugly, the aesthetics of urban chaos. Warm lights gently illuminate sad faces, crumbling walls and barren environments, crafting a dreamy yet credible city atmosphere. It vaguely reminded me of Austrian cinematographer Xaver Schwarzenberger in Fassbinder’s Berlin Alexanderplatz (1980). Hope shines through the cracks of the derelict buildings and dirty classroom windows.

This is, however, not a film without flaws. The topic of the purpose of literature gets lost 20 minutes into the story. It does make a return in the final sequence, but does not come full circle. Plus the chemistry between Lucio and his students is mostly lukewarm, not on a par with the dramatic plot and settings. Similarly with the relation to his father. In a nutshell, this is a beautifully crafted film that would benefit from a little more character depth.

The Substitute showed in the Official Competition of the 70th San Sebastian International Film Festival, when this piece was originally written.