The sister piece of Rimini (released earlier this year at the Berlinale) portrays another broken child of the European Union. This child is in fact an adult called Ewald, portrayed movingly by Georg Friedrich. He is the brother of Ritchie, the protagonist of the earlier film. Both men are socially awkward and yet strangely kind. They are the sons of an ailing elderly man inhabiting an old people’s home. The unnamed father is played by Hans-Michael Rehberg, who passed away five years ago and to whom the film is dedicated.

Ritchie is not portrayed in Sparta, but instead only briefly mentioned. He’s connected to his brother by the paternal figure, a despondent soul often crying for his mother and intoning nationalistic, Nazi hymns. He is surrounded by decrepit old people, in scenes reminiscent of Seidl’s Import/Export (2007). I remember that critics such as Peter Bradshaw were shocked by such raw portrayal of lives in their twilight, and also questioned the director’s ethics (when the film came out 15 years ago). This is only one of the many dirty aspects of Sparta. I can only imagine that these critics will experience convulsions when they watch Sparta, a far more controversial, grotesque and yet profound and beautifully made film.

Ewald leaves Austria, his birth nation, in search of meaning in Eastern Europe. He moves to rural Transylvania, where he starts a relationship with a beautiful young woman. They break up, as soon as she realises that he is not sexually attracted to her. Ewald then sets up a judo training ground in an abandoned school building. His pupils are all children and prepubescent males. The makeshift institution i aptly named Sparta. Sparta was the ancient Greek city-state where parents regularly engaged in incestuous relationships with their children, with both mother and fathers teaching their young how to masturbate and engage in sexual activity. Ewald does not go to such extremes, instead photographing the children posing in their underwear, wrestling or showering with them in the nude (Ewald is naked, but not the children).

As in Import/Export, Seidl subverts the relationship between the East and the West. It’s not the poor Eastern Europeans that travel to the rich Western nations in search of sexual gratification, but instead the other way around. The fact that Austrians can freely move and even set up a “business” in the former Communists states (Slovakia in Import/Export; and Romania in Sparta) is a strange reminder of the bizarre reverberations of open borders. Both films are Pan-European productions. Europe is a careless motherland that cannot control her errant, unruly children (once again, I’m referring to the adults when I write “children”). 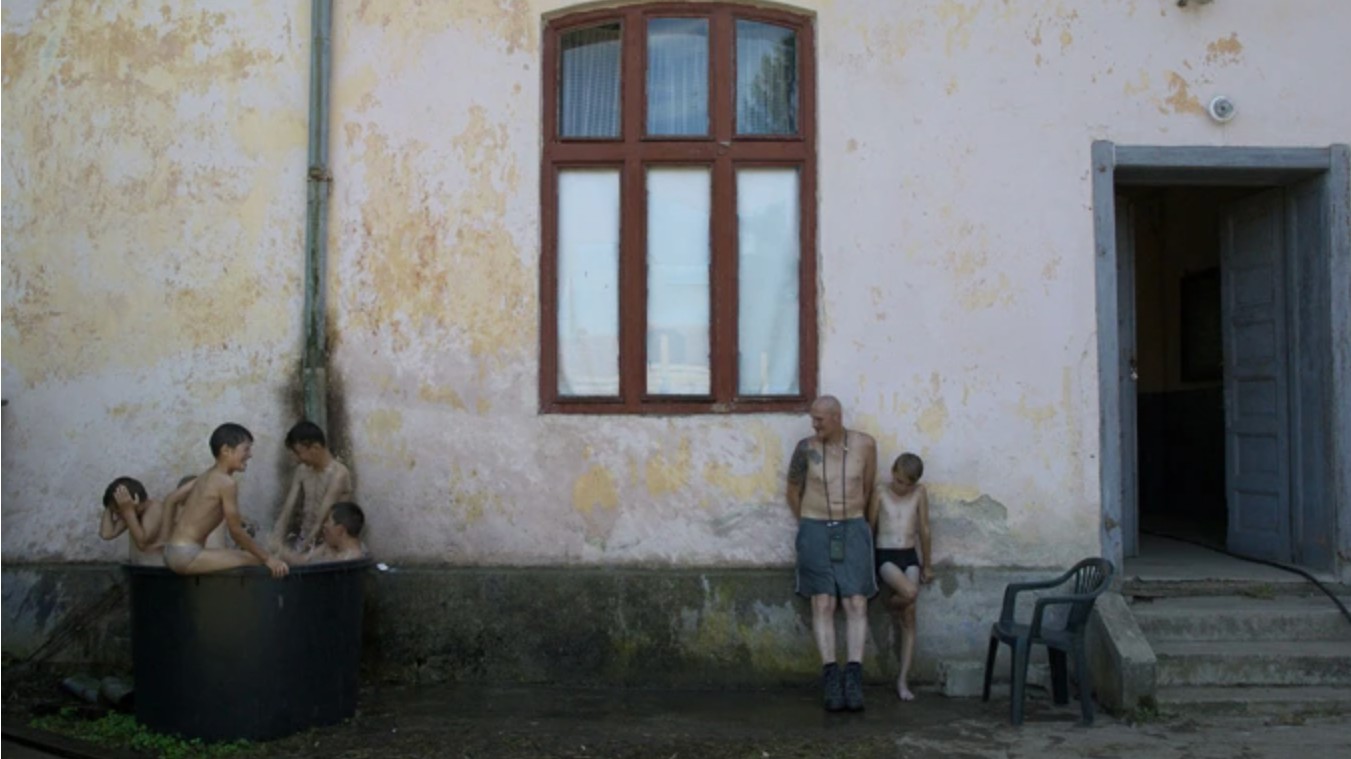 Ewald indeed acts like a child. He is most at ease with the young boys (not a girl at sight). He dresses and names each one of them after a Greek good. He plays and goofs around with them. He displays a wacky type of puerile innocence that reminded me of Michael Jackson: “We give them hot milk, you know, and we have little cookies”. He is never violent. In fact he challenges one of the parents who seems to have smacked his son. He is incapable of hurting anyone, it seems. The most violent scene is perpetuated by a hesitant boy at the orders of formidable father: a rabbit is killed and butchered in front of the cameras (such graphicness will ring bells with those who watched Seidl’s Safari, from 2016).

The intimate scenes between Ewald and the children are extremely difficult and uncomfortable to watch precisely because our sad protagonist is not portrayed as a monster. Seidl’s unforgiving, static camera, always at a safe distance from the characters (he uses mostly medium and long shots), captures the spontaneity of the action in vibrant detail. He neither sanitises nor fetishises his characters. Some sort of moving image version of Diane Arbus.

Seidl is sympathetic towards his hapless protagonist, as in all of his films. The Austrian directors portrays misfits teeming with sentiment and pain. Sadly such humanisation of a paedophile if off-limits to many programmers, critics and film-lovers alike. They would prefer to see such people portrayed as evil, their eyes red, their mouths frothing with libidinous anger, complete with a maniacal laughter. Unsurprisingly, there were quite a few walk-outs. The German tabloid Der Spiegel accused Seidl of manipulating his characters. the Toronto International Film festival cancelled the film premiere. FilmFest Hamburg announced that it would no longer be giving Seidl its Douglas Sirk Award. And the director himself cancelled his visit to San Sebastian. Fortunately, the Basque film festival has not removed the title from its selection, however I doubt that it will receive any significant awards.

This is the type of film that hits audiences in the face, and forces us to confront our most contradictory feelings. Should a kind and gentle man clearly struggling with his innate attraction to young males be the subject of pity, and should we instead hate and chastise him? I’m more inclined to the former approach.

Sparta showed in the Official Competiton of the 70th San Sebastian International Film Festival, when this piece was originally written. It is part of the brand new Critics’ Picks section of the Tallinn Black Nights Film Festival.

The great Austrian director Ulrich Seidl returns with another masterpiece, a character portrait of a man simply too big for one film to contain - in cinemas on Friday, December 9th [Read More...]