"Dirty gem"
Dirty gem of a documentary provides some vibrant insight into the life of Britain’s oldest drag queen - in cinemas and also on BFI Player on Friday, August 5th

The cabaret scene is something that has become eponymous with British culture, and more specifically, the wonderfully British seaside towns that stalk the perimeter of this Island – I mean, are you even British if you haven’t been to one? When you think of cabaret in all its glitz and glam, drag queens – or drag artists – are usually charming the audience with crass jokes and with a wit that is unmatched. For David Raven though – the oldest drag artiste working in Britain today – and his alter ego Maisie Trollete (which is one hell of a name), it is his life, there is nothing else he’d rather be doing, and with David’s 85th birthday fast approaching, marvellous Maisie lets us all have front row seats – and backstage access – to her vibrantly glittering life in all its glory.

Maisie follows a very observational form of documentary – we are but mere flies on the wall as we enter the somewhat subdued and tranquil life of David Raven. It feels key for director Lee Cooper to only observe this story as it unfolds, to keep the very nature of the subject matter as undisturbed as possible, and because of this, the film excels with its goal of pure authenticity, it illuminates with a great warmth and protrudes such heart that it becomes impossible not to like, and that in itself is an overwhelming success. It is the perfect style choice because it lets the eccentric old man reminisce about his glory days; travelling the world, meeting all kinds of famous people, truly allowing this character to shine through – and when one has such a bubbly and comedic personality like David, it would be a travesty to not allow that to bloom

David is the centrepiece of a wonderful little community of fellow entertainers; there is a beautiful camaraderie between these drag queens that speaks to you quite heartily, it’s a very comforting feeling for sure. The melancholic scenes in David’s home show this at its subtle best, away from all the sparkles and the glamour is a group of pals that enjoy what they do and doing it in each other’s company – the respect they all have for this circuit legend really blossoms at this moment. This is where the character of David can really let

loose, a man who has loved and lost people dear to him, and the emotion he transmits is a dagger to one’s heart – and with the help of the camera as it fixates on pictures or with the activation of some archive footage from his glory days, this melancholic feeling hits you like a tonne of bricks, and that might just be the most powerful message the film tries to implement. 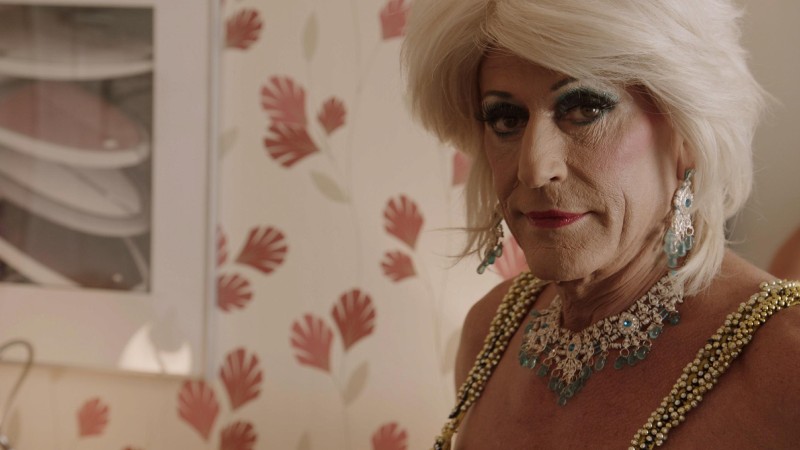 If you thought this was a film that only featured one ageing drag queen, then you are very much mistaken because with David’s 85th birthday looming, a special surprise will be waiting for him. It is in the form of Walter Cole, The Guinness Book of Records Oldest Performing Drag Queen in the World at 87 who lives in Portland, Oregon, and the dynamic that these two stalwarts of their shared lifestyle have is as splendid and as funny as it gets. David and Walter are cut from a different cloth even though they are both legends of the exact same niche profession – who’d have thought it? Think of their first meeting as “the unstoppable force meets the immoveable object,” and it’s an absolute joy to watch. Their personalities were always going to clash at some point because… well… they are two old men and if they don’t like someone, they won’t pretend to either.

One of the film’s supreme moments involves the two men as they are changing into their alter egos before the big birthday bash. For entertainment value alone, it’s a winner – never have you seen two men in their 80s go through so many different motions: creaking, cracking, and swearing every second of the way… it’s better than the show itself. But this is more than just a film about the life and career of a drag queen and his American counterpart because there is an emotional bond between David and Maisie to understand – you can imagine that if the latter stopped, then David would cease to exist, or at least his purpose would.

There is something genuinely sad about David’s career, a feeling that his glittering career as Britain’s oldest showgirl has come to an end; he’s past his sell-by date with the old make-up and the old songs, so why does he not just step aside and let the new breed to take over? It is simple… he cannot, he will not unless he drops dead of course, which is the mightiest display of passion and joy you can have. To still be working in your 80s is hugely commendable, to still be doing something as strenuous as this is a marvellous achievement, and the respect this man has received from his peers and his fans lights up every room that he enters. It results in a lovely little documentary that is as genuine as the person in the spotlight, both are full of life and personality, and with such authenticity, something that can often be so difficult to capture.

Maisie is in cinemas and BFI Player on Friday, August 5th.