Lobo Pasolini dissects Andrea Arnold's Cow, and he finds a tragic life robbed of freedom, motherhood and dignity; there is nothing "humane" about benign animal farming!

As an art form, documentary film can serve many purposes: to tell real stories that often are more appealing than fiction, to promote causes, raise awareness… and, quite often, to discuss the very idea of reality and truth. These are epistemological concepts that form key concerns for creators working within this genre.

The form has also benefited immensely from advances in technology towards miniaturisation of cameras that have allowed makers to produce works with intimacy and authenticity that bulkier equipment did not allow.

When I first heard about Andrea Arnold’s documentary about ‘dairy cow’ Luma, simply called Cow (2021), I immediately thought of Frederick Wiseman because of the single-word title. Wiseman’s film titles usually adhere to this minimalist idea to highlight his observational documentary approach, the genre of which he considered a master. By keeping just the name of the object of observation, Wiseman’s films arrive at us with a promise of viewer autonomy to get the essence of his subject.

Cow delivers all of the promises of observational documentary as the director does not frame it in any context and allows the viewer to reach their own conclusions. It takes us to a place hitherto little explored by cinema: animal conscience and sentience. Sure enough, documentaries about wildlife abound, but animals deemed merely ‘production animals’ have been neglected and tagged inferior or completely worthless of moral consideration and the filmic gaze. The rise of veganism over the last two decades has certainly helped forge the cultural conditions for films like this to exist, even if Cow does not arise from an activist launchpad.

The film allows us to take the point-of-view of a bovine trapped in a dairy farm. It is set over a period of four years and it hinges upon Luma’s two last gestations. Dairy cows, as many of us are aware these days, are used as breeding machines by the industry because a) it is the condition for lactation and b) it produces new milk machines if they are females. Male calves are often ‘destroyed’ or fattened for veal.

Aggrieved motherhood is a key theme in Cow. Luma is a suffering mother, perpetually getting her babies snatched away right after delivery, in fact, the film opens with a birth scene. After that, Luma is swiftly escorted away, a string of mucus still hanging from her vagina, to get her milk syphoned away from her body and its owner by right, the calf. The rickety, clumsy and confused baby is by now struggling to suckle from plastic teats in the isolation of a tiny pen. Their bewilderment in relation to the world they have just landed on, made very inhospitable due to the absence of a mother, is heartbreaking. 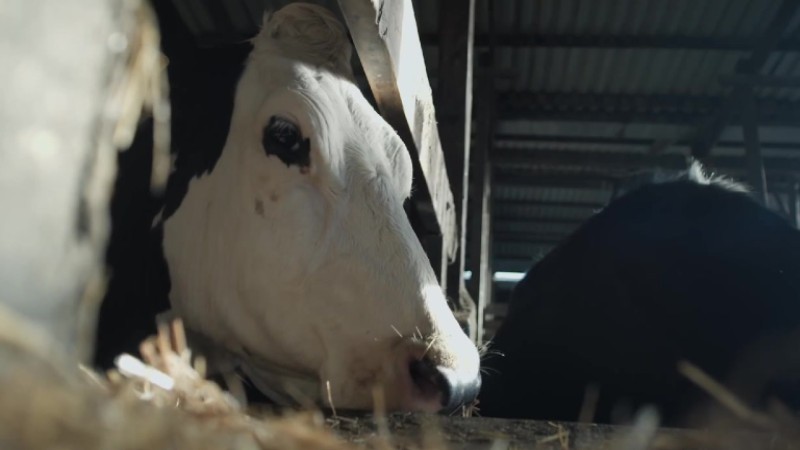 Arnold allows the viewer to get very close to Luma thanks to superb, mostly handheld camerawork by Magda Kowalczyk. At times, her camera comes into physical contact with Luma. We hear her anxious, longing breathing. We feel the boredom of her numbing routine, where all autonomy is taken from her and her peers. Her life boils down to being goaded from pen to pen, carrying massive, painful-looking udders, hers and the other cows’ cumbersome, abused bodies struggling to balance over the filthy, slippery, dungy surfaces of the lugubrious cowsheds they spend most of their lives in. It is a gloomy universe between the rural and industrial that is claustrophobic in its repetitiveness and meaninglessness.

Despite being a non-activist film, Cow unveils, by simply allowing us to see it, the horrors of dairy production. The footage is not the usual Peta-style undercover video, which focuses on the graphically violent. What we have here is something even more hard-hitting. If the viewer really opens their eyes to what is on display, they will see Luma’s turmoiled inner life, her spiritual pain that stems from the fact that she does not own her own body or the other bodies that she carries (six of them in total, we learn offhandedly).

Part of the discomfort in watching Cow is also related to the eerie friendliness of the workers, who call the cows girls but shoot them dead when they are ‘spent’ (no longer useful). The film provides evidence that there is no such thing as benign animal farming, as those ‘humane’ certifications would have us believe. The farm where Luma lives is probably a purveyor of dairy products with all types of reassuring certificates for guilt-free consumption of Luma’s fluids and its derivatives. The truth Cow allows is to arrive at is pretty simple: Luma is a slave. Any niceties on offer are designed to make exploitation easier and perhaps make milk flow more abundantly.

Arnold said in one of her interviews that she kept telling Luma not to worry, that she saw her since not being seen is a theme that interests her and it is one of the many things Luma is denied. There is great power in granting personhood to individuals who are normally clustered together into an anonymous collective so they can be seen and heard. As the film progresses, we are not just seeing Luma, but also bereaving with her after she looks straight at the camera and bellows for her stolen baby. Luma is gone now, but she has been seen. And having seen her, it is impossible to forget her and not share her bereavement.

Both images are stills from ‘Cow’.

Antônio Lobo Pasolini was born in Vitória, Brazil and he has always enjoyed all things dirty. This long-held passion goes back to the late 1980s, when he joined a performance art group called Éden ...