Laurent Garnier: Off the Record

A fellow DJ explains when describing the legendary status of French superstar: “He’s not a rock star, he’s a techno star”. The house and techno icon is as well-travelled, well-versed, and comes with a breadth of knowledge that far surpasses the average man. To many, Garnier is on the Mount Rushmore of techno gods, and as a house and techno fan (Shazam was a suitable ally in this film) watching a film about the life and career of a legend will really hit you in the sweet spot. But this isn’t just a film about the man himself, it’s about the history of the genre, it’s about the vibe, the style, the different eras, and the change in cultures that comes with it.

The history of house music is as interesting as it gets. There are a lot of people out there that would pigeonhole it into one bracket – under the broad electronic music umbrella – but what this film does is to explore and to explain how varied it truly was. Consisting of so many subgenres, it could very easily be one of the most flexible music genres of all time. For this techno story to then be told through the eyes of the acclaimed Laurent Garnier is a masterstroke; he is a man who appreciates all the subtleties of music, and how house music was born from a mixed bag filled with older styles, breathing everything in to improve his palate.

The film – which is directed by Gabin Rivoir – begins with some interview snippets from Garnier’s fellow contemporaries, each of them offering a few pearls of wisdom about the man himself and the music – these testimonials only enhance this man’s reputation tenfold. The film quickly settles into Garnier’s origins and how he became infatuated with music – electronic music in particular – his love for it is infectious, and his personality is too.

Garnier’s life story is an interesting one, with his pathway into the industry being quite unorthodox too – is there ever an orthodox way to become an international DJ though? The man is an embodiment of the origins of house music; himself feeling like a mix of cultures, a collection of styles and substances in the mould that he describes as the birthing of house music. His rise from humble beginnings, using DJing as an escape from real life before entering a career as a London waiter, with some partying sprinkled over the top of course – even with an obvious talent for music and a well-developed ear, Garnier literally partied his way into the business – food for thought, maybe. 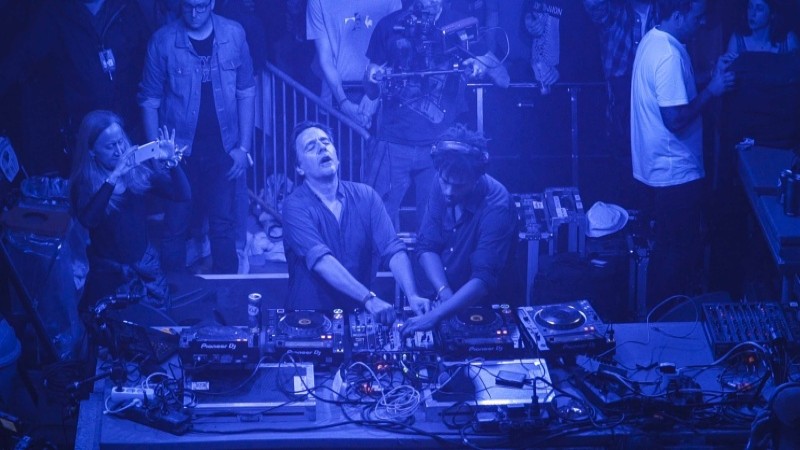 In keeping with the house music vibe in all its various wonders, the collection of footage and the cinematography are incredibly diverse. Structured around the primary interview with Garnier, the techniques include a range of beautiful archive club footage (you can’t beat a bit of dodgy dancing in the dark) which then flows into more modern club vibes – the people change but the music and the feeling do not. However, the tracking shots that follow the man through several parts of the film are quite stunning. Constructed with unconventional framing techniques while being assisted by perfectly chosen jazz music, it often delivers the feeling of a French New Wave film; full of nuance and subtlety, these scenes are incredibly uncomplicated and add a whole new dimension to the film, away from the hustle and bustle of the fast-paced dance scene.

But it needs to be reiterated that this film explores a lot more than just Laurent Garnier, it also masquerades as an informative history piece. This historic film not only investigates the origins of music in places like Detroit, Chicago, France, and the UK, but it also delves into some huge civil rights movements in all of these places, some of which might be a mere blur in your memory – it is poetic perfection that music has the potential to heal so many thoughts and worries. However, none of this could truly be represented without the film’s expert editing; intertwining important footage with the musical ensembles that flood the film, it flows effortlessly from one topic to another.

Laurent Garnier: Off the Record just feels different to other music documentaries; this isn’t a film that only caters for house music aficionados, it has the potential to interest those people who are on the periphery, those of you who might feel a little unsure about those rapid-fire beats and enigmatic bass. It is an intimidating genre for some – it is most definitely an acquired taste – due to the volume, and the association with drug culture that often gives the genre a bad name. But just remember, this culture came after the music, and the music will continue long after that culture meets its demise – a tribute to the majesty of this genre of good times and happiness.

Laurent Garnier: Off the Record is in UK and Irish cinemas on Friday, July 15th. On various VoD platforms on Thursday, July 28th.

Where have all the cassette tapes gone? Documentary explores the die-hard world of tape enthusiasts, and dives into a new factory of the obsolete technology in the US - from the East End Film Festival in London [Read More...]

A robot with profound human feelings: this new doc about Gary Numan reveals the emotionally fragile human being and the ups and downs behind one of Britain's most poignant and innovative pop idols of the 1970s [Read More...]