"Mostly clean movie"
The fourth entry in the Thor series demonstrates a more searching character fighting a menace that's deadlier, and more expensive, than any he's fought before, yet the outcome is utterly predictable and soporific - in cinemas on July 8th

There’s banal, there’s batty, and there’s Thor: Love and Thunder. It’s the work of the nominally cheeky Taika Watiti who revitalised the slagging Marvel franchise in 2017 with his turbo charged vision of a hero lost in outer space, but who has been subject to a series of disappointing returns since releasing that particular film. Jojo Rabbit (Watiti,2019) was underwhelming, but at least it was a commentary on man’s influence under the spotlight. At least Jojo Rabbit offered the world something of greater substance than an endless convoy of angles demonstrating Chris Hemsworth’s grand chest.

Boredom prevails. The only thing more predictable than the plotline to Watiti’s venture is the appointment of Christian Bale, now jumping from one – arguably worthier – comic book franchise to play one of Marvel’s more insipid villains. Bale is quite hopeless, although considering his recent metier that’s scarcely surprising, and the plot – a by the numbers story that highlights illustration over ingenuity – demonstrates the titular Thor preparing himself to counter Bale’s nefarious Gorr the God Butcher, a tyrant who is making it his mission to rid the universe of all celestial beings. Between these two behemoths stands Natalie Portman’s Jane Foster, now notably buffer than her last appearance in 2013. Like the men, she’s all muscles and girth, but if she can’t provide Thor with the love he craves, can she at least give this film some form of heart? 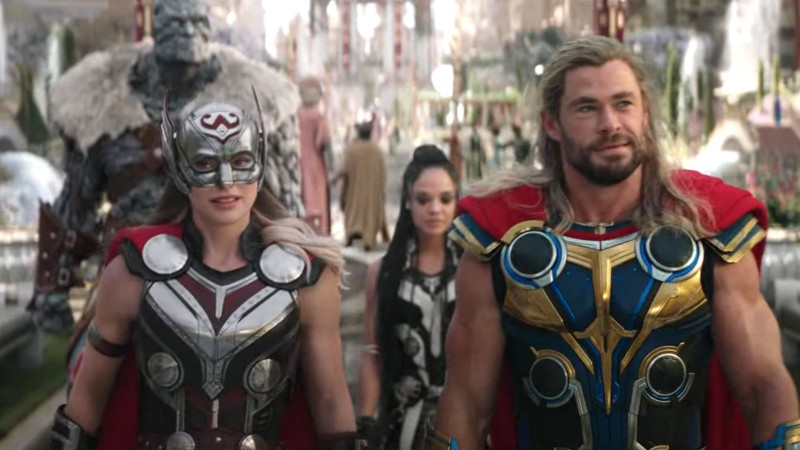 The answer is a resounding “no”. The fourth Thor film is the weakest in the series, offering a vision that is ultimately haughtier and less satisfying than Kenneth Branagh’s debut. The only reason why Watiti was asked to direct Thor : Ragnarok was in a last ditch effort to make the Marvel industry appear more friendly and cuddlier in its milieu. It worked, but the enthusiasm that pushed Ragnarok to such great heights is sorely missing in this outlet. Indeed, the franchise as an entirety lost steam as early as the chugging Avengers: Infinity War, although this didn’t stop the series from aping Samuel Beckett on the genuinely awful Avengers: Endgame (Anthony and Joe Russo, 2019). Robert Downey Jr and Chris Evans were allowed to sidestep from roles they had clearly grown out of, but Hemsworth wasn’t allowed such an easy exit, but instead plunges him back into the world of thunder and fire, dissuading from flexing his acting muscles, in the hope of pandering to the twelve year olds who kept this risible franchise afloat for fourteen long protracted years.

With any luck, Thor : Love and Thunder will prove a wake up call for the cast, who are too good to be squandered to be wasted with such a wanting premise. Perhaps its time that Marvel took a leaf out of DC’s book, and wrote a character piece that explored the inner workings of its greatest villain (Joker), or submit viewers into the depth of the underbelly that has serviced the milieu of the graphic novel for so long (Zack Snyder’s 2013 Man of Steel is a worthy example) But as long as Marvel continues to mine the market that has made them so rich for so long, we’ll be beholden to such plodding treatments, no matter the Russell Crowe’s that populate the big screen, or the thunder bolts that strike the sky like the sound of a Norse God summoning a rhapsody from the annals of gallows tinted amusement. No, as long as they keep churning out the trite, they’ll never reach Valhalla that obsesses Thor’s mind, no matter his efforts or earnest attempts to reach inner peace. And much like the hero who searches for something more meaningful, maybe it’s time for the Marvel team to grow up?

Thor: Love and Thunder is in cinemas on Friday, July 8th.

The Marvel Cinematic Universe delivers its first film with a female protagonist, in one of the most anticipated movies of the year - in cinemas from Friday, March 8th [Read More...]