"Filthy genius movie"
The enigmatic character study of Assange’s father, John Shipton, is a masterful piece of filmmaking that will impress Assange's supporters as well as also those who don't like him - in cinemas on Friday, July 8th

A month after Priti Patel’s not unexpected ruling to extradite Julian Assange to the United States, defying an earlier ruling by the Westminster Magistrates’ Court which feared for Assange’s mental health, Ithaka comes at a time when the fight for Assange’s freedom continues in the form of a recent request by Assange’s lawyers to appeal Patel’s decision before the High Court. Regardless of what one’s views on Assange are, Ithaka is a brilliant piece of filmmaking which concerns itself with documenting the saga of a family in search for a return to the quiet intimacy of life, in the midst of a storm generated by international geopolitics and the stratagems of the powerful. Moreover, aside from being a political film designed as a vital piece of ammunition for the fight for Assange’s liberation, the film, most interestingly, becomes the enigmatic character study of Assange’s father, John Shipton, as he sails from one corner of the world to the other, building coalitions and alliances, attending hearings and responding to the press — something he is especially good at.

Assange is absent from the film, only existing as a ghost at the other end of a telephone, a lingering figure, at the same time central and peripheral to the events portrayed. What replaces the son is the father, embodying the image of the bearded and wise old man, whose delicate and calmly soothing speech, filled with improvised proverbs and meditations on the nature of truth and love, lends him the eloquence of a philosopher. Expecting a purely political documentary on the struggle for press freedom, one is taken by surprise by the unexpected depth of this character, and begins to wonder who, and what story, this enigmatic man has to reveal.

In this sense, the director Ben Lawrence, not without some tensions with Shipton himself, does an excellent job at slowly unveiling some of the facets that build up this fascinating person, whose life-passion, as he claims, was to build houses and homes for people, stages for ‘the theatre of life’ to take place in. From the frst scene in a series of interviews, captured with wide-angle lenses with Shipton facing the camera in his kitchen, we notice a divergence between Lawrence’s and Shipton’s vision for the film. Indeed, Shipton is reluctant to delve into specific aspects of his relationship with his son, and warns Lawrence of any attempts to find a narrative out of the incoherent rumble of his life, a drive which he associates with ‘Hollywood’ and sensationalism. But it is unclear what Shipton expects of the filmmakers and of their creative endeavour, which is also slowly becoming his own. Does he wish the film to merely explore the political side of the Assange affair? Is narrativisation inherently equal to sensationalism? Shipton alludes to the nebulous concept of a ‘destiny’, which is, in his view, what filmmaking and, broadly speaking, the struggle for freedom should be about. As abstract as this can sound, Shipton slowly starts allowing the filmmaking process to take hold of him, and Lawrence, very subtly, constructs the circumstances for Shipton to explore and reveal his own subjectivity.

One must applaud the important decision to include scenes where the very mechanisms of filmmaking are discussed and reflected upon. The first interview brilliantly portrays this conflict over what is to be represented and narrated. Moreover, one could argue that if Lawrence chooses to push for the personal story, it is for the purposes of giving breadth to the political story which is at the core of the Assange case. As Assange’s wife, Stella Morris, explains, Assange is not just a symbol, an incarnation of the struggle for truer forms of democracy and freedom, he is also a man, with a body and a family, who suffers. This idea permeates through the documentary, and guides Lawrence in his will to convey the story of the father, in a way that not only defies sensationalism and crude narrativisation, but is also loyal to Shipton’s idea of ‘destiny’, to be interpreted perhaps as the use of art to combat forces which escape one’s understanding. 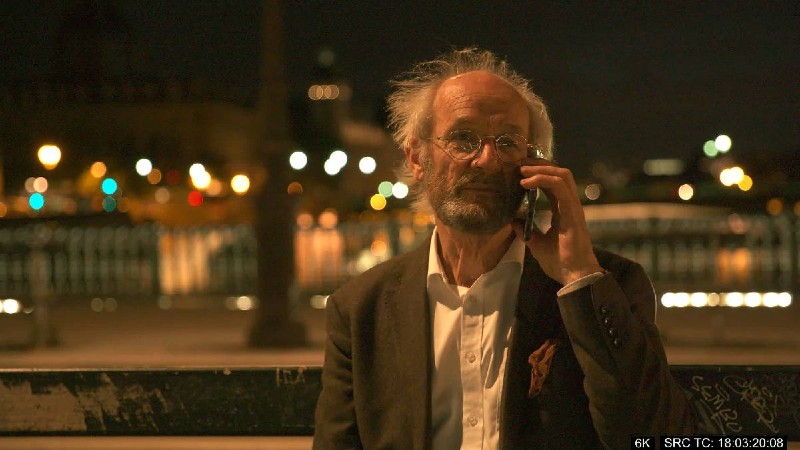 It is clear, by now, that Assange is a character of epic proportions, caught up on the stage of world politics, where a storm has been blowing in his direction for a decade, and where nations stand as titans seeking to destroy not only what he represents, but also his very physical being and his sanity. Shipton himself, although skeptical of the sensational, compares his son to the Greek hero Prometheus, whose will was to give fire and knowledge to mankind, only to be sentenced to an eternal calvary on a forsaken mountain. But Shipton is himself just as eminent as the age-old heroes of mythology. Indeed, in his quiet and calming way, he too comes across as a sort of giant character from the works of classical literature, a man of unique gifs and particularities.

The most touching scene is one where Shipton opens up about his autism and depression, which he shares with Assange. Like his son, he was endowed with a rebellious soul: in youth, he remembers copying passages from Voltaire on the school’s blackboard while his schoolmates attended chapel. In time, he became a hermit avoiding the world, afflicted by severe depression, riddled with fssures and contradictions. However, his drive for knowledge finally led him to wish to communicate with others, and ultimately, he found meaning by discovering the will to love, truly and sincerely, as he says. In a sense, everything that Shipton does, that Shipton is, can be compared to the building of a home, to architecture. He evokes the idea of building at numerous times, and even associates the creation of a family with the construction of a mansion, every person representing a room, with a specific design and furniture. He claims that after his father died, he burnt all of his family photos; later on, faced with a tabula rasa, he built his present family by drawing inspiration from the books and plays he had read in life. Similarly, in order to affront and tame this hostile world, Shipton had recourse to literature and fiction, and finally designed himself, his persona, from the fragments and elusive mirrors left behind by art.

But the film never veers completely away from the political, being rather a brilliant reconciliation between politics and art, information and aesthetic beauty. Indeed, the existential and the philosophical are intermingled with the strictly political, thus eroding the illusory dividing line between them. The existential informs, and stands upon, the political. In this sense, Ithaka succeeds both as a piece of informative documentary filmmaking, serving a concrete political agenda, and a work of art of emotional and philosophical depth.

To conclude, akin to the great ordeals of the heroes of mythology, Assange’s story is precisely one which refuses closure—the only closure willing to be envisaged by the powers at bay is the closure of death. Lawrence, however, conveys the idea of closure in the face of its own absence, by hinting at the need for the family to continue their struggle, even if hope is gradually fading. In comparison with an earlier featurette, Pablo Navarrete’s No Extradition (2020), where Shipton appears as fiercely unyielding in the struggle, ‘until death’, as he says, Ithaka shows Shipton in fearful moments of doubt, near the end, in a heart-wrenching scene where he finally breaks down, slightly tearing up, and confesses that there may be no hope left. The film ends in a house in the countryside, where he is seen from the frames of a window, in the company of his five-year-old daughter, calm and immersed in the elements, ‘without interest nor prejudice’, a few calm minutes before, once more, the blowing of the storm.

Ithaka is in cinemas on Friday, July 8th.

Documentary follows John Shipton, the father of journalist and WikiLeaks founder Julian Assange, in his efforts to prevent his son from being extradited to the United States - now on VoD [Read More...]

Docudrama about man who led the landmark investigation into the CIA torture program reveals the dirty secrets of the intelligence service - in cinemas Friday, November 15th [Read More...]