Our critic's time in Cluj-Napoca offered a serendipitous combination of location and venue, offering a balm in difficult times

I spent most of my time in Cluj-Napoca crossing roads. This is a car-centric city, with wide four lane traffic, the constant hum of vehicles and two minute waits to finally get to the other side of the road. But it’s also a city that’s modernising. Apparently, if you do twenty squats in front of a machine, you can get a free bus ticket. Meanwhile, modern QR codes prevail; I rarely handled a paper menu.

This tension between innovation and frustration was best encapsulated by David Easteal’s phenomenal film The Plains, previously reviewed here by John Bleasdale at Rotterdam. Shot over a year, it follows a middle-age man from Melbourne on his commute between the suburbs and the city, capturing the frustration of daily life and living under a constant sense of grind. My final film of the festival, it best captured the smart programming throughout, featuring formally striking documentaries and dark brutal fiction films. The Plains is both and neither, a one-of-a-kind experience that simply demands a cinematic viewing.

It would make a great double feature with The Balcony Movie. Shot before coronavirus, it still feels like a lockdown project, with director Paweł Łozinski standing on his balcony and asking people about their lives. Like the camera seldom leaving the back of a car in The Plains, the restricted balcony itself becomes a view to look upon the world, capturing the small yet expansive lives of Warsaw’s citizens.

And despite the traffic, Cluj itself never felt restrictive, with relaxed terraces, cute cobbled streets, great, inexpensive food, beautiful parks and friendly people. The democratic nature of the film festival was best represented by its open-air screenings. Although ticketed events, anyone in practice can stand in the street and watch a film like Gala opener Call Jane or Cannes opener Coupez! It’s this kind of democratic approach to screenings in the Unesco City of Film that made for such a pleasurable experience.

And when in Romania, it would be rude not to visit a Transylvanian castle. The highlight of the fest was dinner followed by a movie at Bánnfy castle; the movie, of course, was Nosferatu, replete with a new, brash and operatic (if a tad on-the-nose) live score by composer Simona Strungaru. In one moment of true site specific magic, a bat flew over the audience. Whether let out on purpose or not, it makes one appreciate the power of seeing films in their appropriate settings. Celebrating its 100th anniversary, the film was eerily relevant, with plague and disease following the eponymous vampire along every step of his lecherous journey.

Does one need to travel to a festival to appreciate films, or the lives of filmmakers? I learned that if I want to see where F.W. Murnau lived in Berlin, I only need to walk twenty minutes from my home in Grunewald. Meanwhile, digital options are proliferating and screeners are easily available (at least for me). While a great film can be watched anywhere, the most transportive experiences are still found in a cinema, all the while surrounded by willing crowds (and the locals were very generous during some terrible comedies.)

Talking of connections — both figuratively and literally — I’m writing this round up on the first of many trains back to Berlin, watching fields and cars and hills roll by, delving deep into the beautiful Romanian countryside. No one is wearing a mask; perhaps the pandemic is behind us. 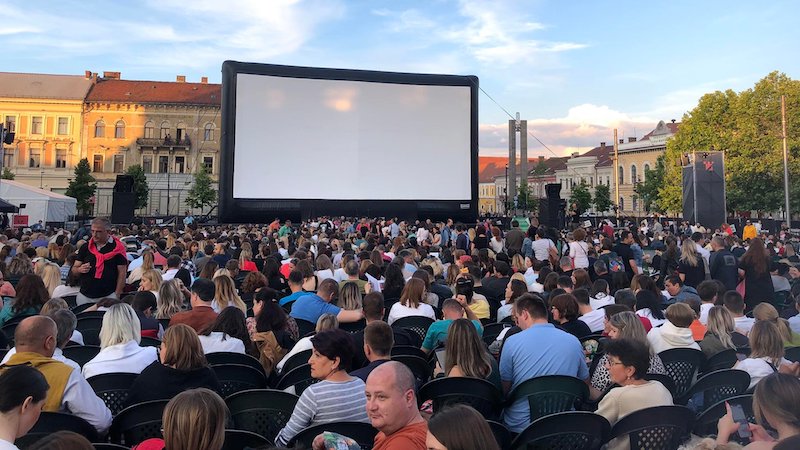 In Europe right now, there are even worse things than pandemics. The main idea behind the festival, encompassing both films and talks and debate, was the idealistic slogan: “Make Films, Not War.” Talking to organisers, there was tension about including Russian films in the programme. And despite the brilliance of competition entry Execution, a twisty-turny serial killer drama with shades of Park Chan-wook and David Fincher, there is certainly an uneasiness in watching a film from a country (and I country I love) that’s waging war on Ukraine and the free world. There are no easy solutions here, making for an awkward time in filmmaking, exhibition and distribution.

Perhaps other nations can teach us valuable lessons: How I Learned to Fly is a broad Serbian holiday comedy from populist director Radivoje Andric that although silly and childish on the surface, hides a serious message behind the gags. A young girl from Belgrade goes on a trip to Hvar with her grandmother; she’s uninterested in history and just wants to meet boys. But she eventually reunites with her Croatian family, previously rent apart by the war, something the children know nothing about. Neat equivalences between the Balkans and the Ukraine/Russian conflict cannot be made — no two wars are the same, and I am not remotely close to an expert in either region. Nonetheless, perhaps it gives us hope that conflict will one day look as strange and alien to us as Nosferatu itself — a film that doesn’t feel just 100 years old, but positively ancient — and modern-day vampire Vladimir Putin (who looks a little like Count Orlok himself) finally gets burned by the sun.

The ticket inspector rolls by; my inter-rail ticket is valid. There’s no air-conditioning or Wi-Fi, and the train keeps randomly stopping (at least the train is running, unlike most options in the UK this weekend!). I’ll be in Budapest some time tomorrow. Europe remains at a fractured moment, but moments like this, and festivals like TIFF, can help us to come together.

This exceptionally mean-spirited Spanish horror about an obese teenager and her crush on a serial killer is an absolute blast - in cinemas Friday, January 6th [Read More...]

An unpredictable and dark serial killer drama, this Russian film plunges us straight into the Soviet heart of darkness — live from TIFF. [Read More...]

A lightweight comedy tackling serious themes in Balkan history, this is a film perfect for introducing children to the 90s conflict - live from Transylvania [Read More...]