"Dirty gem"
This exceptionally mean-spirited Spanish horror about an obese teenager and her crush on a serial killer is an absolute blast - in cinemas Friday, January 6th

This film is foul and exceptionally mean-spirited. It’s also hilarious and monstrously enjoyable. Telling the story of an obese teenager bullied by her peers who finds the most perverse way possible to finally turn the tables, it’s a deliriously fun Spanish effort boasting a fearless lead performance, a strong sense of place and a keen willingness to push the limits of sheer awfulness.

Sara (Laura Galán) is doubly unfortunate. Not only is she extremely overweight, but she also works in a butcher shop. This earns her the brutal moniker of Piggy by the other girls in the small Spanish town, who take pictures of her and post them on Instagram with cruel hashtags. (It brought back memories, considering my own surname). She eventually tells her mother about her plight, who meanly suggests she should go on a diet. When Sarah heads to the local pool alone, three of her contemporaries capture her head in a net before stealing her clothes. After that, you can’t really blame her for not saying anything to the police when those same girls get kidnapped by a deranged serial killer.

We’re never given a definitive reason why Sara doesn’t report these kidnappings to the police. Is she scared? Is she attracted to the serial killer? Or does she think that these horrible girls actually deserve it? All interpretations are in play, with Sara making bad emotional, hormone-filled decisions every step of the film, causing endless and unpredictable chaos; confusing everyone from worried mothers to clueless cop to teenage heartthrobs. 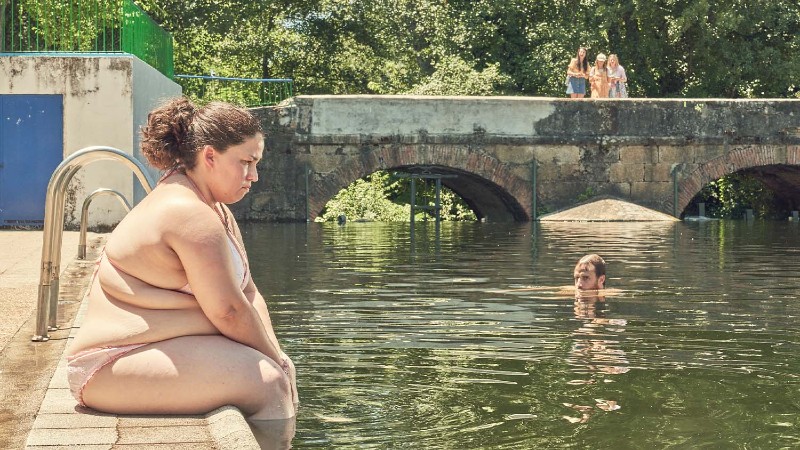 It’s shot in Academy Ratio, a suitable choice as it allows Sara’s gait to fill the frame and for the film to have an ironic, whimsical approach to the material, utilising pastel colours at first before getting darker alongside the subject matter. Complemented by moody string music, Stranger Things-like lens flares and a solid evocation of a small town where everyone knows each other’s business, and this is the perfect teen horror movie to watch at a midnight drive-in. The destination might be obvious, but it’s the way it gets there that provides pure thriller pleasures.

It is also the kind of film that would inspire endless discourse on Twitter if it was made in the USA or UK. It’s the classic question of laughing with the protagonist or laughing at her. Nonetheless, Piggy is not so much concerned with getting representation right then just allowing Sara’s fatness drive the story at every turn — including a ridiculous but also finely rendered subversion of the final girl trope. It helps that Galán is completely game here, turning in a brave performance that combines sexual curiosity and teenage despair with absolute ease. She’s flawed, stupid, funny and complex; not a fat girl who was made just for think pieces, but one seemingly doing everything possible just to exist in the first place. For one thing, her story carries an important moral: be careful who you bully. They might actually be a lot stronger than you think.

Piggy played as part of the Full Moon sidebar at Transylvania International Film Festival, when this piece was originally written. In cinemas Friday, January 6th.