"Filthy genius movie"
Embark on a cinematic journey across a harsh wilderness; the mission is to find the elusive snow leopard in the Tibetan Highlands; the outcome, however, couldn't be more different - now on various VoD platforms

There is something about the study of animals in their natural habitat that is as authentic, as magical, and as therapeutic as it gets. This story is set in the Tibetan Highlands, a sanctuary land that is full of mysticism, it is teeming with life, and yet it still harbours dangers like no other. Multi-award-winning nature photographer Vincent Munier takes the equally acclaimed writer Sylvain Tesson (writer of ‘The Consolations of the Forest: Alone in a Cabin on the Siberian Taiga’, which is about the travels in this film) on the most unique of missions: to track and photograph the legendary but elusive snow leopard.

The Velvet Queen begins with trickery; a documentary with such stillness in its cinematography that you could be mistaken for thinking this is but a mere montage of perfectly arranged photographs. The simplicity is adoring and authoritative, and then with one subtle movement of an eyelid or frozen breath, that is when it hits you – this is the first magical impression the cinematography leaves you with, and it’s just an idea of what’s in store.

There is an eerie but calming stillness attached to this film that is generated from the power of this godly place, they are intertwined with each other; the beauty and the vastness go hand in hand. There is even, dare I say it, a Western vibe that follows the first act; two men alone on the prairie with nothing but the sounds of the land guiding them. Although, the perfectly composed score by Warren Ellis and Nick Cave is an attributing factor to that feeling. The music and the camera are a match made in heaven; the two adventurers are merely a part of the supporting cast.

But that’s not to say these two men don’t play an important role in this journey to the promised land because a relationship that you might think could result in the locking of horns, proves to be nothing of the sort, a bond between two men has been enriched by this shared experience. Sometimes they don’t say a word because nothing needs to be said, and other times they talk about life, and history, they share stories around their sacred campfire – just enjoying the company of another can be the most basic and satisfying feeling one can have. 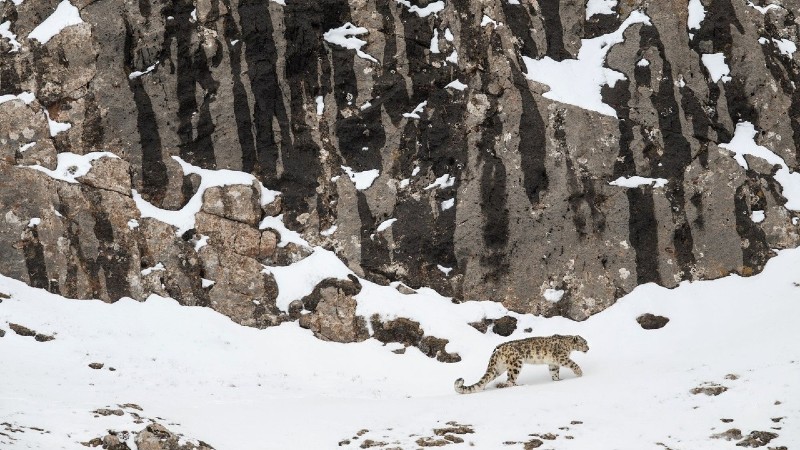 After the scene has been set and the introduction has settled, the adventure truly begins to kick into action, it suddenly becomes a mission involving two men braving the conditions and interacting with the plethora of animals that this dreamscape has, they are now transfixed on completing their objective of witnessing this beast of legend. The fact the film is broken up this way only strengthens its allure, to have two contrasting narrative styles, aesthetics, and structures, side by side makes for wonderful viewing – it is trying to teeter on the edge of documentary and drama.

And yet, throughout all that story, throughout the entire journey, it is the sublime cinematography that comes away with the film’s gold medal – this really is a fantasy film for fans of the art of cinematography. Each scene is as gorgeous as the last; the silhouettes of the animals as they block the sun, the micro facial details, the fauna, everything is just so exquisite. In a good way, some of these shots are haunting; it is all very spiritual, it’s as if these animals are staring straight into your soul. It is a strange but truly invigorating feeling, and as Munier says, “In nature, you can’t cheat, it is just you”, and these beasts understand that too.

The Velvet Queen is so nuanced, so raw, so beautifully engineered that it becomes hypnotic, it really is a treat for the eyes and the ears. And in great documentary style, a narrative arc was needed, and this delivers a positive one. The mission was complete, all that waiting and wondering made it worthwhile in the end, the leopard itself steals the finale, and the moment is captured perfectly by Sylvain, “patience really is a superb virtue”, and in this circumstance, never has a truer word been spoken.

The Velvet Queen is in cinemas across the UK on Friday, April 29th. Also on Curzon Home Cinema, Amazon Prime and Apple TV.