The medieval setting is a powerful tool used for storytelling, establishing heroes and villains, and mostly always delivers that bloodthirsty violence that you sat down to watch in the first place. The Northman is no different, and you could even say that this film uses that age-old structure for its foundations, and then builds something entirely new on top of them. Using the story of Hamlet as its inspiration, The Northman is brutal and gothic, filled with mystery and mysticism, and brimming with so much primal testosterone that you might find yourself on all fours howling like a dog.

Robert Eggers has become one of the most intriguing and unique filmmakers of the last 10 years, with both The Witch (2015) and The Lighthouse (2019) receiving universal acclaim, so the expectation was high for this film. And just like those previous two films, the gorgeous aesthetic is the first thing to punch you in the gut; it uses a cold and eerie setting with a palate of dark and sinister colours – this Nordic environment is not to be taken lightly. In the last twelve months, we have been treated to such an eclectic mix of medieval epics, and The Northman evokes similarities to The Tragedy of Macbeth (Joen Coen, 2021), with the dream sequences and the rituals, and the cinematography by Jarin Blaschke (who has worked on all of Egger’s films) becoming the beacon for everything that is truly great in this film.

The film begins with King Aurvandill War-Raven (Ethan Hawke) returning home from a battle that has left its mark on his mind and his body. His son, Prince Amleth (Oscar Novak) is on the verge of becoming a man when his father is brutally murdered by his uncle Fjölnir (Claes Bang), who then proceeds to take Queen Gudrún (Nicole Kidman) for his own, and the throne in the process. The young Prince escapes and vows revenge on his half-blood uncle, “I will avenge you father; I will save you mother; I will kill you Fjölnir!” are his cries that echo long into the night, fuelling his vengeance.

Time has passed and Amleth is now a hulking beast of a man; a berserker warrior played by the unrecognisable Alexander Skarsgård; understatement is not a word used in this man’s vocabulary. Amleth soon goes undercover as a slave so he can sneak into the Icelandic camp of his now exiled uncle, and on this journey is where he meets Olga (Anya Taylor-Joy); a mysterious but enamouring character that immediately stands out from this crowd of browns and greys with her “hair of a Valkyrie”, and her cunning, which is to become a powerful ally. 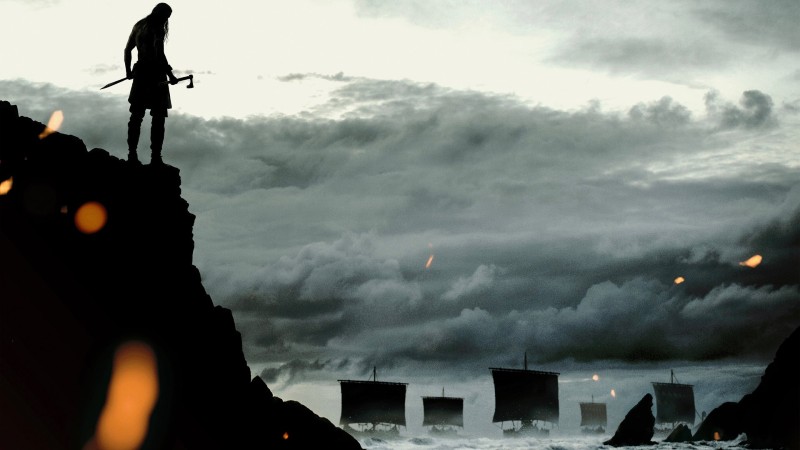 As you would expect with a Viking epic, the film is incredibly intense throughout, whether it is the violence that could ignite at any moment or the rawness of the characters with their animalistic nature being a constant reminder of the wildness of this period. And the violence isn’t just mindless, it is actually quite simplistic; nothing too extravagant in terms of skilled swordsmanship, but more reliant on brute strength and a ‘fight as if it’s your last fight’ motto. Certain scenes will make you wince, and some you just have to sit back and admire.

And for all the work it does at delivering an absorbing visual spectacle, with its skull crunching brutality, its gorgeous cinematography, and those vibrant Valhalla dream sequences, there is also a wonderful score hidden underneath it all that emphasises the power of the film. Created by Robin Carolan and Sebastian Gainsborough, it has a very avant-garde and ambient sound to it; relaxing for the most part but then, enter the score’s godlike intensity when called upon, and it truly delivers a side to the story that is unmatched – that Volcano scene is one that will leave an impression on you, for sure.

The Northman is gargantuan and one of the best historical films to be released for quite some time. It isn’t just a violent retelling, it attempts to be something different, something more. It teaches you about life, death, and profundity; it is bold and because of this the film is undeniably a success and exciting from minute one until minute end.

Eggers himself says that he can’t believe he’s created something so manly, it is also so different to his previous films because of that, and yet, all three films share certain qualities

that instantly force you to think “this is definitely an Eggers film, that is certain.” The fact this film was created with a budget of $70 million is a remarkable thing, its success tells us that you can create a story that is frightening, consists of hypnotic visuals and great acting, without the need for a huge budget (small compared to some of the numbers out there today anyway) – some of these other filmmakers could learn a thing or two from Eggers.

The Northman is in cinemas on May 7th. On various VoD platforms on May 31st.

When a new assistant joins a seasoned keeper in an isolated lighthouse, the experience challenges his sanity  - on VoD on Monday, May 25th [Read More...]