Between March 25th and 27th, I had the privilege to attend Seeing and being seen: Representation in Film, a conference on the need for diversity in German cinema organised by the Film Festival Munich at the Evangelical Academy in Tutzing. Once again, I am reminded of how gorgeous the Bavarian countryside is, with the conference’s location, lying on the banks of the shimmering Starnberger See, offering the perfect opportunity for spirited discussions, inspiration and the possibility to find new solutions.

Having previously written an article on the topic for Exberliner, it was a pleasure to meet many of my interviewees in person, as well as see how seemingly-abstract discussions within the space of diversity can actually be translated into actionable goals. Artistic director Christoph Gröner and programmer Julia Weigl allowed for open and spirited discussion, including many disagreements and heated moments. Although everything remained civil, it showed that this is not just a one-and-done topic, but worth revisiting one again and again.

What really opened my eyes was the keynote talk by Mia Bays, director of the BFI Film Fund, who, alongside Head of Inclusion Melanie Hoyes (pictured below), reiterated the idea that diversity in cinema shouldn’t be seen as enforcing quotas, but an opportunity for better stories to be told. Their film fund, financed primarily by the national lottery, has already created a criteria which can help productions to be more inclusive, and by extension, more authentic. 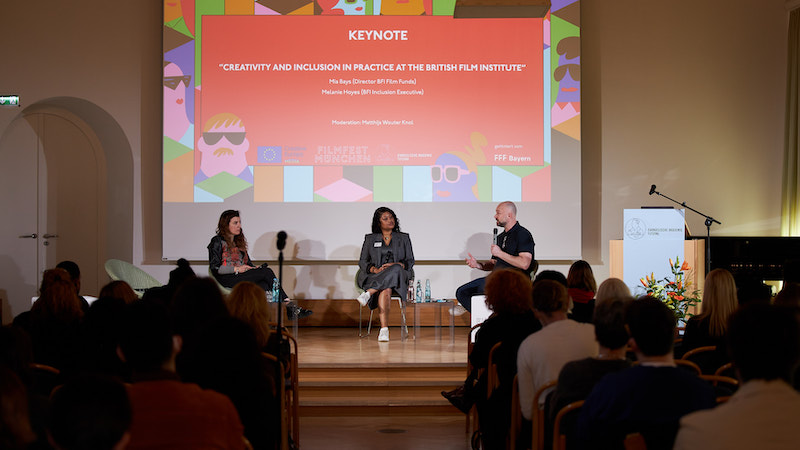 Rocks (Sarah Gavron, 2020), the scrappy British film with a cast of young girls almost completely of colour, was displayed as a case in point. Not only does the film show a part of London life often missing on screen, but the funding came with the stipulation that mentorship, shadowing and learning opportunities would be offered throughout the entire creation of the film. It shows that creating diversity in film is not just about representation, but making sure that everyone gets equal opportunities when it comes to being in front of and behind the camera.

While there’s much to complain about in the UK, especially with regards to certain aspects of our cinematic productions, our commitment to diversity in film, although imperfect, does provide a roadmap for other countries to adopt. Germans from immigration backgrounds and Germans of colour seemed impressed with the British model, hoping that German production companies can adopt similar ideas.\

One notable film fund already looking towards using a checklist to get a better understanding of talent applying, and in my mind, already producing some great stuff, like FIRST TIME [The Time for All but Sunset – VIOLET] (Nicolaas Schmidt, 2021) and No Hard Feelings (Faraz Shariat, 2020; pictured at the top), is the MOIN Filmförderung Hamburg Schleswig-Holstein, heralded by Helge Albers, who was also in attendance at the festival.

Naturally, having the so-called decision-makers in the same rooms as the talent is crucial in order to see that there are thousands of stories just begging to be told. For example, director and actor Sheri Hagen (pictured below), who has been acting in German cinema since the mid-1990s, mentioned several fascinating projects she’s currently working on that she’s still trying to get off the ground. Her immense talent was already on show in the two German films screening as great case-points: sci-fi short film I Am (Jerry Hoffmann, 2021) and Precious Ivie (Sarah Blaßkiewitz, 2021). The British counterpoint, made with BFI money, was the BAFTA-winning short Black Cop (Cherish Oteka, 2022), showing the type of bold cinematic vision that can be created with public funds. 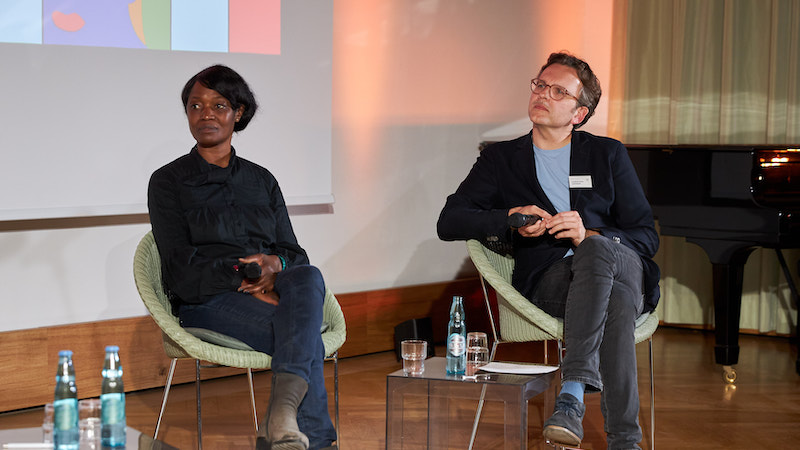 Having somehow interviewed all three directors previously, the choice of films felt rather serendipitous; and it was wonderful to see the two shorts, previously experienced on my laptop, on the big screen. Both countries can produce fine cinematic visions when the money and the talent align, with symposiums such as this helping to bridge the gap and allowing these types of diverse representations to occur.

Of particular interest to me, was finding out about the UK Global Screen Fund, where the BFI is looking for a minority stake in co-productions with other countries. While events like the Berlinale are often dominated by French-German co-productions, British-German co-productions are pretty are. The German talent in attendance were also particularly interested in the possibility of working with the British, especially as Brexit can often make us Brits feel further away. Here’s hoping we start to see some great cross-cultural collaborations coming up in the next few years.

FIRST TIME [The Time for All but Sunset – VIOLET]

Germany and Mongolia clash in this heartfelt and searching nomad-based drama — live from Tallinn [Read More...]