The source for Deep Water is a novel Patricia Highsmith wrote back in 1957, right after her most famous novel, The Talented Mr. Ripley. Lyne’s film is the third adaptation, coming after a 1983 French film starring Isabelle Huppert as well as a German television movie. Regardless, given that Lyne’s film is on Prime Video outside of the US (it’s on Hulu there), it will be the version most people will end up seeing.

The story is basic: Ben Affleck plays Vic Van Allen, a young retiree who made bank selling a computer chip to government contractors that allows drones to find hotspots of people to blow up. His younger wife, Melinda (Ana de Armas), is a promiscuous woman who has been cheating on him, and openly flaunts it to her husband’s face. The duo ends up playing mind games that could end up having deadly consequences for more than just them. 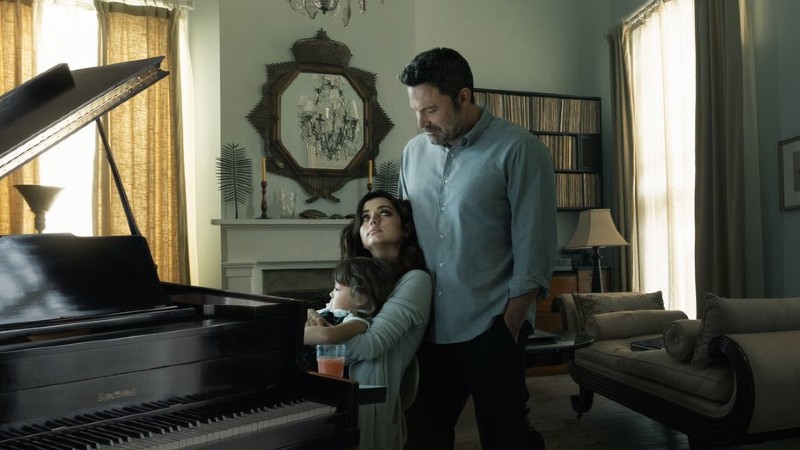 Affleck’s performance jumps from typical sturdy dramatic work to some of the most baffling line readings he has ever given, and then to the rip-roaringly hilarious final act. Ana de Armas can play the sexy femme fatale part in her sleep. She is clearly having a ball torturing her then-boyfriend. The film was delayed so much that the twosome broke up over a year ago. If de Armas has the desire to, she could play this type of role for the rest of her career. Tracey Letts plays a writer friend who becomes suspicious of Vic, and has the film’s biggest laugh with a rant against autocorrection.

Eigil Bryld’s cinematography is competent, if not a little televisual. Along with shooting In Bruges, Bryld works often in the world of high-end TV drama such as House of Cards and The Loudest Voice. He delivers simple tones, with lots of whites, greys and blues – some sort of Fincher-lite, but without any razzle-dazzle. Fatal Attraction was shot in in a similar way, it’s a lot less flashy than people remember. Jacob’s Ladder is the film where Lyne went all-out stylistically. Paul Verhoeven’s classic Basic Instinct had more finesse than Lyne’s work in the genre.

Deep Water isn’t going to blow anybody away, but it’s nice to see a film that proudly wears its erotic thriller credentials. It should probably have been even sleazier and sexier, there’s not enough nudity from either star. The Burnt Orange Heresy (Giuseppe Capotondi, 2020) is a recent film in this milieu that is slightly more highbrow which is more successful artistically. The script would have benefited from at least another rewrite. The ending is very unsatisfying. Maybe the film was recut numerous times to get it down to a more user-friendly version that’s under two hours. The end credits even have an outtake of Grace Jenkins, who plays the couple’s daughter, singing in the car. She does this earlier in the film, but it just seems tonally out of place, given the events of the film.

Deep Water is out on Friday, March 18th on Prime Video, as well as other platforms.