"Dirty gem"
Ukrainian teenage gymnast Olga uses gymnastics as an escape from the troubles that danger her family and the place she calls home, as she watches her city burn from the distance - in cinemas Friday, March 18th

The world of gymnastics is an incredibly competitive one, so intense that it can lead to toxicity, tainting the very environment that you have used as your escape, leading to jealousy and disdain – that is the fierce nature of gymnastics for you, no wonder I didn’t take it up. Olga, (which is being released into UK cinemas to raise money for Ukrainian refugees) offers a brutal look into this world, which is one of the most ruthless and dangerous sports around, especially for young girls, where the pressure seems to mount tenfold. And yet, this brutal regime we see is used as a front for the even more brutal events transpiring in the background. Two starkly contrasting things are also incredibly relatable, and it’s the film’s aura that allows this to happen.

Set in 2013, Olga (which is the directional debut of Elie Grappe), tells the story of the titular character, a 15-year-old Ukrainian gymnast who is training for the European Championships. She is forced to move to Switzerland from Kyiv as the Euromaidan protests begin to bubble up to chaotic levels. With her mother in Kyiv, she is left on the periphery of the world she knows, unable to fight and be with the people she loves – just like so many Ukrainians around the world right now. You are led into a false sense of security with this film; what starts as the promise of a politically charged thriller soon turns into a ruthless and all too real experience of a lonely girl in a strange country, watching her home burn in the background.

The film is packed full of realism, and the leading light for it all is the performance of Anastasia Budiashkina, who is a former member of Ukraine’s national gymnastics team – that will certainly help for sure. She is wonderful in the role though, playing the character

with such natural ability, you could even argue she is playing a version of herself because it feels so pure. Although it’s not just her former gymnastics experience that transverses this aura, she is Ukrainian after all and is clearly affected by the events that have, and still do ravish her home country, which only adds more fuel to the character. Olga is a battle-hardened but equally vulnerable teenage girl that is forced to harness this tough exterior, and Anastasia is what makes this possible. 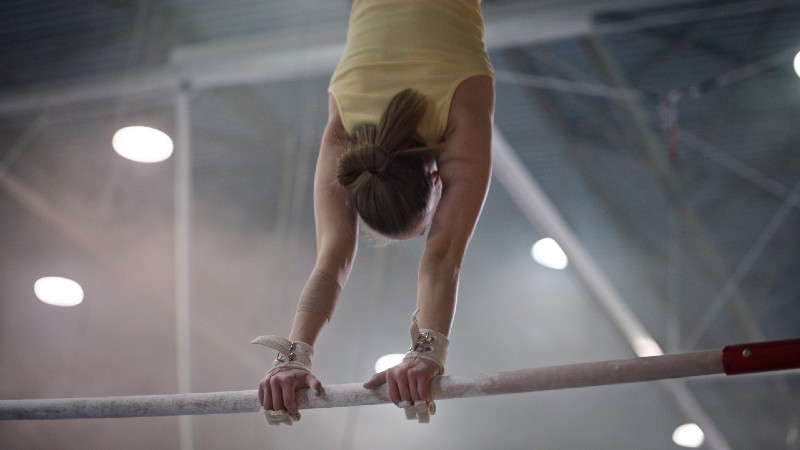 Olga is harrowing at times, the sharp music that is often heard is reminiscent of a horror film, it engulfs those night-time training sequences in the gym and catapults them to an eerie but majestic level. Those same sequences are also littered with unorthodox framing techniques that are used to add tension to the scene, which only magnifies the pressure that these girls face. It is in these training segments where the comparisons to the Ukrainian battlefield are enhanced; the echoes of the gym sound like gunfire and Olga is now trapped in this theatre of chaos, her only form of solitude has now become polluted by the traumas in the background.

What we see as archive footage is what Olga sees for the first time, it is just a stark realism for everyone about what happened. The Euromaidan protests developed after Ukraine rejected the offer to join the EU, after pressure from Russia. The protests led to a revolution (a term that is kyboshed by a particularly miserable grandparent in the film) which has unfortunately led to a 10-year fight for freedom, resulting in the affairs that are currently happening in the country. You believe all the passion that manifests itself in this film, emotion speaks louder than words and the facial angst of everyone involved is perfect at highlighting this. It is often said that sport can be there to separate politics, something that Olga’s former coach attempts to get across as he defends his decision to join the Russian team, to which Olga simply replies, “You’ve chosen your side”, and nothing more needs to be discussed.

Away from the politics, the pain, the trauma, Olga is a beautiful film – albeit often quite dark – that is executed with great subtlety and at times, with such detailed forcefulness. The events are thrown in your face, so you absorb the magnitude of it all and experience two extremely contrasting events in a similar scenario. Gymnastics are used as a poetic means of escapism, and yet, the intense and beautiful nature of that alone is another adventure in its own right.

Olga is in cinemas on Friday, March 18th. Cinemas will donate profits to Ukraine via the Disaster Emergency Committee.