"Dirty gem"
Extinction Rebellion take matters into their own hands when it comes to climate change, charging at the agonisingly difficult problem head-on - on Netflix on Wednesday, June 29th.

Believe it or not, climate change is a real problem, one that often gets disregarded as a farce, or supported with an untrustworthy facade of care and worry. For causes dedicated to climate change, it takes a serious group of activists to come together and take the fight to the doorstep of power, and Extinction Rebellion answered that call in 2018. Members were recruited like a team of Avengers, all of whom hail from different walks of life and offer certain expertise and pragmatic insights – billionaire playboys with suits of armour they are not, more like dedicated, green-fingered farmers eager to break the rules.

Directed by Maia Kenworthy and Elena Sánchez Bellot, Rebellion is the first behind-the-scenes story of the Extinction Rebellion movement, an organisation for people that wanted to tackle the climate change problem with forceful hands. The extremely personal footage shows the cause on a rollercoaster of success; capturing humanistic dramas and the painstaking stresses that the climate emergency has on people. You might think this is some hippy-dippy hocus pocus, but this intricately assembled team are just regular people; students, farmers, lawyers, all of them possessing one common goal, to make people aware of the issue.

This was a movement that appeared all over the national news, and yet, a lot of the coverage was about unsettled locals and exasperated work commuters (a narrative that was pushed far too strongly by the press), even though there was a much more prominent issue bubbling up from within. Rebellion is a film that uncovers the problems that arose, and perfectly showcased the meticulous planning and structure of a movement such as this. Very alike to the Hong Kong film Faceless (Jenniger Ngo, 2022), in the way it highlights the everyday details and the forceful execution that is needed to deliver such passionate planning, as well as discreetly portraying the movement as a family-like resistance fighting for one cause. 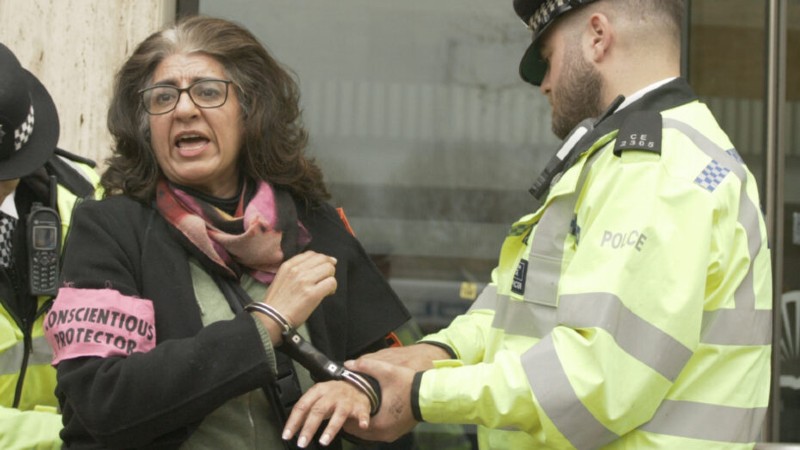 What makes Rebellion so personal is the tandem relationship between the camera and the specific structure of the narrative. Consisting of interviews with a range of prominent members of the cause, but it is the extreme close-ups in these interviews that allows us to see the angst on these people’s faces, or to watch the cogs turning in many of these congested minds – if the notion isn’t already there that this subject is a worrying one, then looking deep into these people’s eyes, or seeing their fibres twitch will change that. There is a moral dilemma attached to these people throughout the film though, the interviews accentuate this by having the subject interviews conducted after the events; with the people looking back over their actions with such a variety of opinions – do they regret certain actions? Would they change the events in hindsight? Possibly. But the same passion will always be there.

Throughout the film, there is a constant battle between good and bad; the customary figures of virtue (the law enforcement) are now on the wrong side of the battle, with the rule-breaking activists now firmly being the positive force for once. And yet, the line of morality is persistently flipped on its head as the film progresses and the acts of Extinction Rebellion continued to blur this line; people from within the organisation are often wanting to force matters into more extreme ways, as one member says, “there is always an attraction to mindless violence”. The de facto leader of “XR”, Roger (the farmer with the tunnel vision), is a prime example of blurring this morality, acting like a dictator of sorts – it’s his way or the highway in some cases. Is such a cause worth losing your daughter over? Sometimes leadership isn’t for everyone, which we know is often the case.

Politically fuelled documentaries can be very hit and miss, a lack of interest in the film’s subject is sometimes the cause of their downfall, but Rebellion just hits a little bit different, and it might just be because of the main theme, which is something that affects us all. The way it is structured is one of its most effective tools though; filmed as if it is a covert ops mission – a target has been chosen, and they must initiate a plan of action. Rebellion really explores the point of the film in an exciting and engaging way but continues to be informative and eye-opening, which is the main purpose of a film like this.

Rebellion is in cinemas on Friday, March 18th. On Netflix on Wednesday, June 29th.

Brutally honest documentary explores the lives of four activists during the 2019 Hong Kong protests - watch it now with Dogwoof on Demand [Read More...]

The movie Trump and May DON'T want you to watch: follow-up documentary sees Al Gore travel the globe to explore the latest developments on climate change, and the message is terrifying - in cinemas [Read More...]

Documentary follows Greta Thunberg from her lonely "school strike" days in mid-2018 up until her trip across the Atlantic to attend the New York Climate Change Summit last September; what she achieved in little over a year is truly astounding - On Disney + UK on Friday, July 22nd; also available on other VoD platforms [Read More...]