The magnitude of the event was towering, it appeared on TV screens all around the world, for it then to be overshadowed by the incoming pandemic and seemingly forgotten about, but the fight will never end, the battle for human rights is still as strong as ever. This independently produced documentary, directed by Jennifer Ngo, follows the lives of four young Hongkongers as they navigate the smoke-filled streets of Hong Kong, during this tumultuous time in 2019. The challenge is simple: keep democracy and free will rife throughout the city and evade capture from the “peacekeepers” trying to enforce new controversial bills.

Faceless is constructed as a heist thriller, with meticulous planning and military-like precision – it’s all very exciting and suave. The focus is on the faithful four, all of whom are given covert code names and their identities kept to themselves (like a secret society of freedom fighters), all we know are their motives. One by one they are introduced, “The Daughter” a literal daughter who loves her police officer father, but with whom she shares conflicting views, “The Artist”, a queer artist-activist whose plan is to engulf the city in messages, and “The Believer” who advocates nonviolent resistance, and finally “The Student”, who is entering his final year of high school during this rotten period.

This is a powerful and very raw subject, and to get a glimpse of the protestor’s inner workings and mindsets highlight the fact that this wasn’t just mindless thuggery or a statement against the state of power, but expertly showing the feelings of these young people and what they are fighting for. They take to the streets with creativity to counter the forces of brutality with passion and unity, in what might be the largest challenge to the

Chinese Communist Party’s rule since the Tiananmen Square protests of 1989. This film really accentuates the police brutality as well (which was one of the most controversial actions of the protests), to say this violence was unsettling would be an understatement, and the film presents it at its harrowing best. 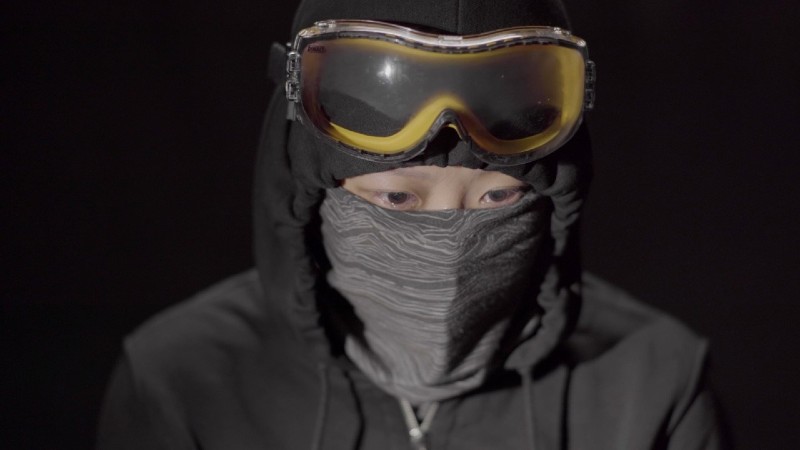 The film is littered with a variety of narrative traits to make it as engaging as possible, this isn’t just a character study about these four people and their actions (although that is the primary style), but it also consists of archive footage of the protests, interweaving with present-day film and a more peaceful environment – a huge but highly effective contrast, almost like a shot-for-shot match of two separate periods. This style is aided by a timeline of events that begins in the 90s, with several laws and bills being put forth over time, and their resulting outcomes and huge public unrest. There is a deep and troubling situation that arises as the film progresses, quite alarming snippets like, “Hong Kong booksellers who published banned books in China disappear, and later resurface in Chinese detention”, a small but scary glance into the imposition of Chinese power. Trying to abolish democracy in this self-governing city it seems, what happened to the “One country, two systems” rule?

Not only is this documentary informative and extremely gripping, but it also possesses some beautiful cinematography, so stunning that it’s hypnotising at times, painting this futuristic facade onto an already unique and elegant city. The cutaways are its greatest tool though: mesmerising footage of the people of Hong Kong going about their daily routine, showing the city at its raw best, adding a humanistic and simple getaway from this tempestuous period. It is quite unsettling that after all the chaos, everything has just gone back to normal, almost as if nothing has happened, and these shots are perfect at showing this.

Sometimes the problem with political documentaries is that they lack engagement, they lack a substance of interest to lead it forward, and if you aren’t hooked within 20 minutes it can become a bit of a slog, but Faceless grabs you from the off, with its pretty palate and gorgeous natural camera shots. Often feeling like a thriller – a real-time thriller – laden with chase scenes and action, and as gripping as any Bourne film, right to the end. The aftermath is shocking – haunting even – it’s like a warzone, in fact, it is a warzone, with two warring factions going head-to-head. More than 800 protests occurred in 2019, with 10,000 people being arrested, was all their hard work and passion for nothing? Possibly. But do they regret any of it? Not for a second.

Faceless is available now with Dogwoof on Demand.