"Dirty gem"
Spielberg is a little too reverent to cinema history in a remake that searches for a purpose - Oscar winner is out on VoD on Wednesday, April 21st.

Two months on from its release, nothing about Steven Spielberg’s West Side Story seems to make sense. A vague marketing push seemed to reflect the fact that nobody knew who this remake was for – those who hadn’t heard of the original 1961 adaptation probably won’t care, while those who had heard of it will have impossibly high standards for anything that follows a cinematic classic.

This confusion resulted in a box office bomb. However, those who did show up came out with good things to say. A positive critical response was coupled with a surprising seven Oscar nominations, including Best Picture. So, as the film attempts to make a second impression next week with its debut on Disney+, is it worth watching?

For those unaware of the story, it’s Romeo and Juliet with hair grease and big skirts. We go to 1957 Manhattan, a place where economic ambition lives side-by-side with harsh reality. In the ever-changing West Side, two male gangs fight for their turf – the Caucasian gang The Jets, and Puerto Rican gang The Sharks. In the midst of this bad feeling, reformed Jet Tony (Ansel Elgort) falls for Maria (Rachel Zegler), the young sister of Shark leader Bernardo (David Alvarez). The pair are smitten and determined to be together, but the escalating feud between their respective communities makes that union fraught with danger.

There’s a lot to discuss here, both in terms of past and present. The 1961 version has well-known issues regarding diversity, as well as many issues relating to a film from a different era. Nevertheless, it is still considered one of the greatest Hollywood productions ever – from the choreography, to the singing, to the staging, it is the gold standard by which screen musicals are set. So, it is to the director’s credit that this new version lives up to that prowess. The retro, dream-like vision of New York is remarkable, with careful attention to period detail and performance.

There are changes, such as an increased emphasis on relatable issues like gentrification and the sense that economic progress will render this turf war meaningless in a matter of months. The racial barriers are sensitively handled, and Spielberg corrects the issues of the past with Latinx casting on the jets side, and tweaks such as making ‘Tomboy’ character Anybodys a Transgender man, played by Iris Menas. The changes are refreshing, while still feeling true to the spirit of what came before. 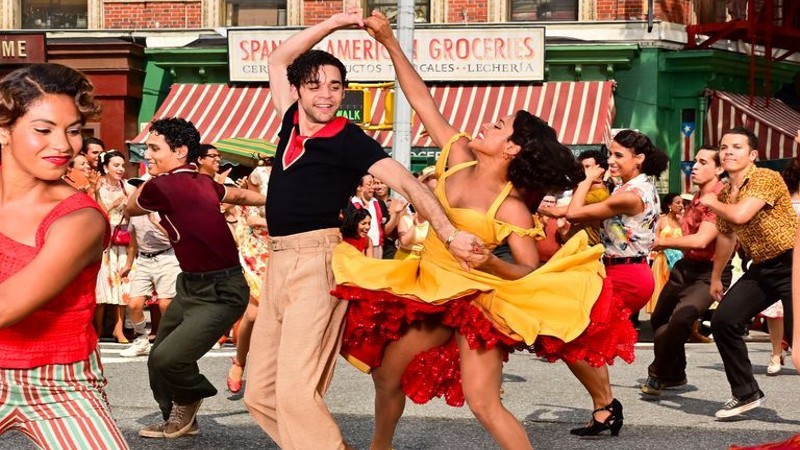 And yet, therein lies the problem. The shadow of the ’60s’ film looms large, and in making something that stands up to the original, it challenges you to find a reason for its existence. Yes, performing signature number America in the neighbourhood streets is superbly filmed and vibrant, but it isn’t the remarkable rooftop celebration that occurred in Robert Wise and Jerome Robbins’ film. The school dance, where Tony and Maria meet, is a spectacular recreation of what came before, but then why not watch the inspiration? It’s an unfair bar to set, but ultimately an accomplished imitation of a landmark work only makes you yearn for the original.

The main element that seems to surpass what came before is Zegler. A remarkable discovery, having been found via an open online audition, the first-time actor shines both in her acting and singing.

Her Oscar nomination is well-deserved, and this stands as one of the great cinematic debuts. Her co-star Elgort is solid, lending a Rat Pack swagger to his singing to cover up an inability to hit the high notes. Whether or not you root for him is dependant on whether you can put the recent abuse allegations out of your mind, a reminder that problematic casting isn’t a preserve of the past.

Elsewhere, the great Rita Moreno, who played Anita in the ’61 version, is wonderful as new character Valentina, replacing original character Doc as a mentor figure to Tony. Ariana DeBose is filled with passion and charisma as the new Anita, while Michael Faist gives pathos to the role of Riff, Tony’s best friend who can’t escape the gang life.

West Side Story is a bright, energetic ode to the musicals of the 50s, proving Spielberg can still muster the kind of wonder that made his name. However, the hallowed status of his inspiration means those efforts may be sacrificed at the altar of comparison.

West Side Story is on VoD on Wednesday, April 21st.