"Dirty gem"
The biopic of tennis coach Richard Williams is a glossy but inspiring take on the American Dream, with a career-best performance from Will Smith - five-Oscar nominee is now in cinemas and also on various streaming platforms

While his most successful genre has been big budget blockbusters, Will Smith has made a few runs for Oscar gold in his career. The 52-year-old has been nominated twice, for 2001’s Ali (Michael Mann) and 2006 drama The Pursuit of Happyness (Gabriele Muccino). While he could well feel aggrieved that his transformation in Muhammad Ali wasn’t successful in earning Oscar gold, other ventures have felt a bit cynical, particularly the mawkish Seven Pounds (Muccino, 2008) and muddled sports drama Concussion (Peter Landesman, 2015). Now, he takes on a different kind of movie, in perhaps his best chance at glory yet.

King Richard tells the story of Richard Williams (Smith), a father of five living in LA’s Compton neighbourhood. Determined to keep his offspring off the streets, he sets out a plan for his daughters Venus and Serena (Saniyya Sidney and Demi Singleton) to become tennis stars. Coaching them himself using little more than books and tapes, he forces his way into the insular world of tennis to get them to notice two of the brightest talents in the sport’s history.

Every aspect of the film is designed to inspire, from the rousing score to the many speeches delivered, reminding us of the importance of the Williams Sisters not just to sport, but to African-American culture. This may trigger a cynical instinct in some viewers, but hindsight is on the filmmakers’ side. Williams did set out this path for his daughters, he did train them on the courts of Compton with the sound of gunshots in the background. However, this is more than a sob story. It’s about the perseverance and single-mindedness it takes to be a champion, and the foresight to create something that no one has ever seen before. The presence of snobbery and classism in the sport makes a compelling argument: Williams’ vision for his daughters may border on obsessional, but it is far better than the abusive country club parents who berate Venus’ opponents. The belief, and the vindication of it, makes for a feel-good couple of hours.

Of course, this is a Hollywood biopic, and if there is a flaw it’s in the refusal to question much about its subject. Williams is always right, and even when he’s not it’s for a good reason. His scene-stealing nature is treated as just another quirk, while the film’s focus on Richard means his wife Brandy (Aunjanue Ellis) and the sisters themselves become supporting players in their own story. It’s no more than any other biopic would do, but it’s clear this is a version of events meant to cement a legacy, rather than dissect it. 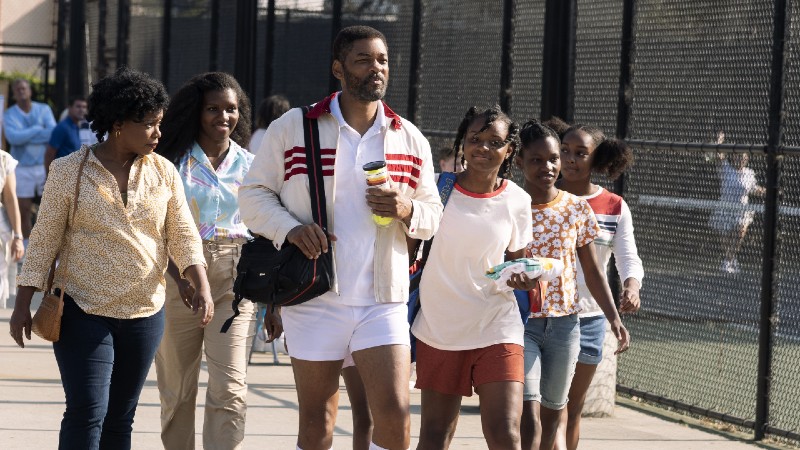 In Williams, Smith could arguably have found a kindred spirit. The man who has dominated TV, music, and film industries during his career has always meticulously planned out his next move, but in this role, he gives us something a bit more natural. Smith makes the most of the stage he is given, transforming himself beyond the tics and whistled H’s to show us a man aggressively manifesting. While he has his character’s mannerism down, some of the best moments come in silence, such as a scene when Richard witnesses a drive-by shooting, or confronts a gang member interested in his daughter. Many of the actor’s dramas have felt like auditions for The Academy, but here he simply does justice to the character and produces one of his best turns in twenty years.

The lead takes up a lot of space, but there are interesting performances around it. As ever, John Bernthal does great things with a small role, playing Venus’ coach Rick Macci. Aunjanue Ellis is superb as Brandy, but her lack of time on-screen can often be frustrating given how good she is with the scenes she has. At one point, Macci accuses his client of making everything “The Richard Williams Show”, and in the film itself, the quality of Smith’s work comes at the price of other characters.

History is written by the victors, and Williams’ remarkable journey deserves just as much generosity on screen as the many other biopics that gloss over the negatives. An uplifting portrait of The American Dream, King Richard may have what it takes to fill its star’s Oscar destiny.

King Richard is showing in cinemas and also on various streaming platforms.