"Filthy genius movie"
The great Austrian director Ulrich Seidl returns with another masterpiece, a character portrait of a man simply too big for one film to contain - in cinemas on Friday, December 9th

Ritchie Bravo (Michael Thomas) is the kind of loveable, broken rogue that you can’t help but love. He calls his casa a pirate ship; he dons a huge “sealskin” jacket; and he always provides a bon mot on the right occasion, especially in front of the ladies. But beneath the armour, the persona, the legend, is a man, adrift in a miserable seaside town, covered in snow and blanketed in cloud.

Ritchie Bravo is a schlager singer, crooning the kind of cringe-worthy songs that make Tom Jones sound like an opera singer. He lives in Rimini, a far cry from the warm, sunshiny city of its most famous son Federico Fellini. Unlike Fellini, who actually recreated the town on set in Cinecittà Studios, Ulrich Seidl shoots firmly on location, finding the kind of places so cringe-worthy — like an oldies bar named 007 Dancing (3.6 stars on Google Maps) — you simply couldn’t make them up.

Bravo navigates these wintry spaces with ease, sliding between shoddy slot casinos, beachside boozers and shuttered hotels, breezy and easy in public, desperately alone in private; drinking vodka to hide the stench of booze on his breath, and covering his pouchy belly with tape to look better when singing dreadful, sentimental belters in front of coach-loads of elderly Austrians. To supplement his income, he sleeps with some of the visiting ladies, these sex scenes shown in almost all of their unadorned glory.

In these scenes, Seidl shows a part of human life others may shy away from: normal people have sex; old people have sex; fat, ugly people have sex. It’s a part of what people are, no matter who they are or how they look. In this way, his sex scenes, however awkward they look — and using minimal cuts — are somewhat revolutionary in conventional, non-pornographic cinema. 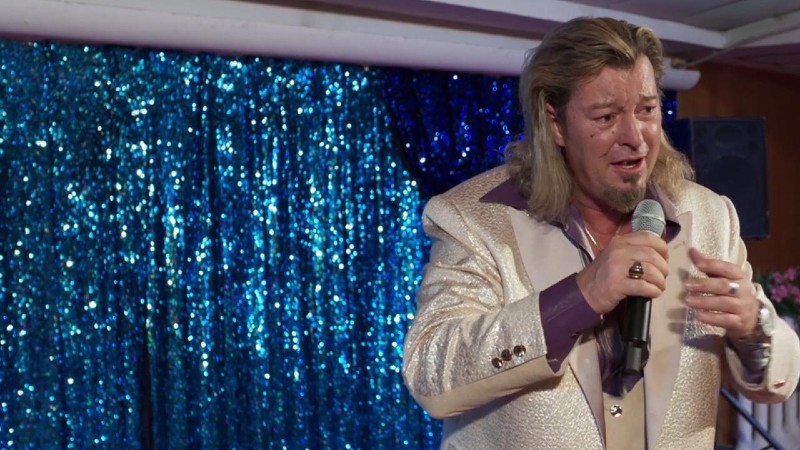 But watching all this, it’s hard not to wonder: what does Ritchie think? What does he actually want out of life? In Ulrich Seidl’s characteristic style, borne from a seasoned documentary career before moving to features, he shoots almost exclusively in medium and long-distance frames, favouring planimetric compositions and still camerawork over flashy inserts or rapid cuts. It’s almost like he’s following a real guy called Ritchie instead of creating a story about him — which starts in North Tirol at his mother’s funeral before taking us back to his life in Rimini, where a sudden blast from the past requires him to rapidly (and perhaps unethically) increase his income.

In this manner, it’s not too different from Sean Baker’s Red Rocket (2021), also featuring a sex-adjacent hustler that toes the line between good and evil, relatable and awful at the same time. The most satisfying part is how cleverly the dramaturgical line snaps into focus: despite looking like a shabby character portrait, this is a neatly plotted story with a beginning, middle and end, simply composed of the kind of longer, more contemplative, enigmatic and interesting scenes that many other screenwriters would choose to leave out.

Touching on themes of race, identity, belonging, sexuality and more within its runtime, it nestles various ideas within its simple seeming style; resulting in a touching, intellectually rich and at-times hilarious portrait that I would simply love to watch again. Thankfully for us, Ulrich Seidl has already wrapped on a continuation of that same world. I will be first in line: Ritchie Bravo is too big for just one film.

Rimini played in competition at the 72nd Berlinale, when this piece was originally written. It premieres in the UK in October as part of the BFI London Film Festival. In UK cinemas on Friday, December 9th.

A deep-dive into Austrian Cinema

Our journalist Ben Flanagan attends the Picturing Austrian Cinema symposium organised by the University of Cambridge since 2014; the event - which was also attended by no less than Michael Haneke - challenges preconceptions, unearths dirty gems and reveals the hidden facets of a cinema little known to many Brits [Read More...]

Austria's enfant terrible Ulrich Seidl punched San Sebastian in the stomach earlier this year with a depiction of paedophilia that's tender and grotesque in equal measures; his latest masterpiece is now at the Tallinn Black Nights Film Festival [Read More...]