"Greasy movie"
Noise meets food in this culinary British comedy, using a horror-aesthetic while hanging out in a strange fantasy world - now on all major VoD platforms

In-fighting, flatulence and freaky food is all on the menu in Flux Gourmet, the latest offering from oddball auteur Peter Strickland. Conjoining his pet themes — the meaning of compromise, deep dives into noise, and the way sex is used as a weapon — into one culinary package, it’s further proof of his unique, uncompromising style. While not reaching the heights of The Duke of Burgundy (2015), it’s a strangely amiable comedy that might not provoke any belly laughs, but kept me wryly smiling throughout.

It occupies a realm between what I’d term horror-light — taking the giallo-lighting, penchant for gore and rapid zooms the genre is often-known for — and light-fantasy, set in an institute dedicated to the fusion between cooking and music. Heading a “band” taking up residency for an undefined amount of time in this location is Ella (a brilliantly prickly Fatma Mohamed), berating her colleagues Billy (an emo Asa Butterfield) and Lamina (a more straight-laced Ariane Labed) for not following her vision to the letter. Soon the band find themselves butting heads with the institute leader, excellently played by Gwendoline Christie. She wears so much black-eyeliner that she resembles a panda.

The film betrays its left-field approach to storytelling early on, when the narrator, Jan Stevens (Makis Papadimitriou), a Greek journalist tasked with documenting this collective, complains of gastric turbulence. There is something wrong with his intestine, leading him to constantly hold in farts. This means that he’s perennially uncomfortable, making his job chronicling the various disagreements within the band incredibly difficult. Their pursuit of culinary performance perfection is later complicated by various rifts between the group, including the sly machinations of the institute leader and a rogue collective previously rejected from the institute lingering menacingly around the edges. 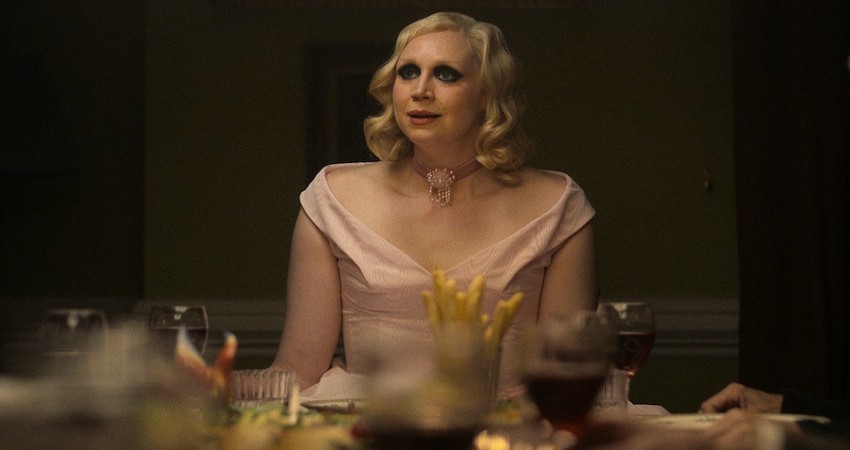 Strickland does a great job of establishing and interrogating the unique personalities of all the players, giving us a TV series worth of content within just two hours. These aren’t just types, but people with their own hang-ups and neuroses, not easily solvable within the confines of a movie. Repetitive moments — from the teams synchronised wake-up to their morning walks to crucial “after-dinner speeches” — give us the full overview of each central character, allowing us to see the story from a variety of different perspectives. One could easily imagine a longer-form adaptation with a different collective appearing each episode.

This is definitely true when it comes to the actual art at the heart of the film, developing Strickland’s obsession with noise as previously seen in The Berberian Sound Studio (2012). I wanted more: from the crackle of fresh food hitting the pan, to the boiling of water, to the crack of an egg opening, hearing conventional kitchen sounds blown up to surround sound is a true auditory delight. But beyond a running joke about a flanger ruining their performance and generic droning sounds, the actual mechanics of the music is left sorely unexplored.

And when the “wind” does finally comes, it simply arrives too late, making for an unsatisfying finale. Nonetheless, I’m happy someone is giving Strickland the money to make films this stylish and weird. I’ll come to his restaurant anytime.

Flux Gourmet played in the Encounters section of the 72nd Berlinale, when this piece was originally written. It is out on monst VoD platforms in September.

Francois Ozon's male version of The Bitter Tears of Petra von Kant never justifies its own existence, either as a remake or as a portrait of Rainer Werner Fassbinder himself - in cinemas on Friday, December 30th [Read More...]

Lara C. Cory interviews the director of In Fabric and finds out the secrets and peculiarities of his latest movie, a dirty gem of filmmaking shining with mystery and twisted sexualities [Read More...]