Meet me in the Bathroom

Director - Will Lovelace and Dylan Southern - 2022

"Greasy movie"
Twenty years ago in New York, a new generation of artists provided the world with firm evidence that rock'n roll in not dead - rockumentary shows at the BFI London Film Festival

Based on the eponymous book by Lizzy Goodman, Meet Me in the Bathroom documents the oral history of the New York indie-rock scene between the late ‘90s and the mid ’00s.

There was little going on in the way of rock music in the last ’90s. Some underground was being played at the anti-folk venues such as the SideWalk Cafe; it included artists such as Mouldy Peaches and Jeffrey Lewis. Until The Strokes arrived. They gathered a quick following for playing loud, slightly punky rock n’ roll. The Yeah Yeah Yeahs, LCD Soundsystem and Interpol soon followed. After 9/11, these bands reached their pinnacle. People were overjoyed: it seemed like real rock’n roll bands were finally reappearing.

The scene started out in Manhattan, but soon moved to Williamsburg, in Brooklyn. Eventually, the latter became so gentrified that the bands had to move yet again.

The documentary does not feature any talking heads interviews, however showcasing interesting audio conversations with most of the most important artists of the era. This storytelling device is surprisingly effective. The film reveals how these acts became so big, and the strategies that they embraced. Highlights include how the legendary independent record label Rough Trade got a demo from The Strokes, how the band came to the UK, and earned the “saviours of rock’n roll” moniker. The film also investigates how this rock’n roll scene was a boy’s club, and some of the issues around sexism that Karen O of the Yeah Yeah Yeahs faced. 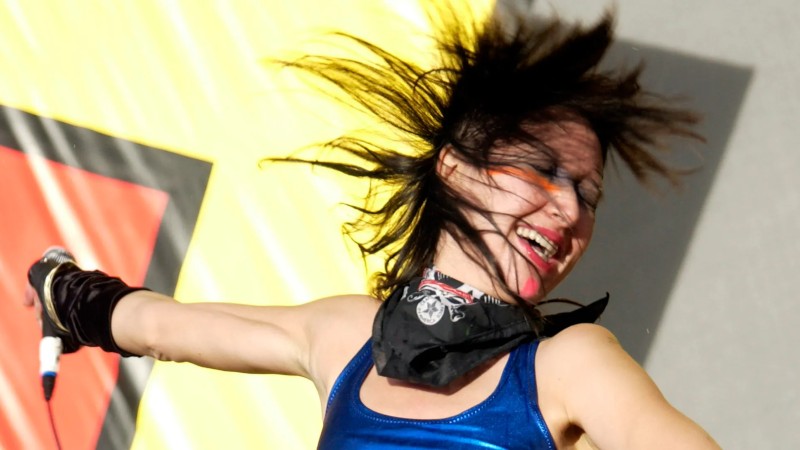 The archive footage is impressive. People walk carelessly without realising that the 9/11 terrorist attacks had just been carried, in one of the film’s most extraordinary scenes. Some of the members of Interpol are then seen in the dust of the aftermath. Naturally, there’s also some good live footage of the bands on tour, including a lot of film from The Strokes’ first UK tour (in an odd double bill with The Mouldy Peaches). Also in the mix are some very good interview clips, including a conversation between Canadian interviewer Nardwuar the Human Serviette and The Strokes.

Meet me in the Bathroom a good register of artists in their 20s enjoying that moment to the full. It’s a well-constructed film that will appeal to rock fans and broader audiences alike. It might even make you appreciate some music you had not given attention to previously.

Meet Me in the Bathroom was made from the directing team behind the LCD Soundsystem concert film Shut Up and Play the Hits (2012). The movie premiered at the Sundance Film Festival, when this piece was originally written. It shows in the UK in October, as part of the BFI London Film Festival.