"Filthy genius movie"
Guillermo del Toro's new film is completely rooted in a brutal noir reality, and it feels like it was indeed made 80 years ago - now on all major VoD platforms

Guillermo del Toro’s first movie since 2017’s Oscar winning The Shape of Water is an adaptation of William Lindsay Gresham’s eponymous 1946 novel. It’s fairly faithful to the book, much more than the first version, a noir movie entitled Nightmare Alley (Edmund Goulding, 1947). Both movies deserve credit of their own, and an attentive viewing.

Bradley Cooper plays Stanton Carlisle, a man with a dark and mysterious past who ends up working at a carnival run by Clem (Willem Dafoe). The story depicts the epic rise and fall of a man during the end of the Great Depression, and ends around the time the US enters the WW2. Stanton is blasé, the War means nothing to him. Stanton is a master manipulator who, along with fellow ex-carny Molly (Rooney Mara), creates a mentalist act that they perform to the upper echelons of New York’s elite. One night psychologist Dr. Lilith Ritter (Cate Blanchett) interrupts the show, and the mechanisms of Stanton’s downfall start to fall into place.

Structurally, Nightmare Alley is essentially two films stuck together: the world of the carnival, and Stanton’s noirish descent into hell. It could be a challenge to the bridge the two stories, but there is a convenient crossroads point where you could put in an intermission. The film runs for two hours and 20 minutes, but it’s never dull for a second—the story just flies by. Del Toro’s camera is never static; it’s always moving, often in very subtle ways.

The ensemble that Del Toro put together is as perfectly compiled. There is not a bad or even mediocre performance Blanchett is the film’s scene-stealer with the most delicious femme fatale delivery since probably the ’50s, especially her last line: “I’LL LIVE!” The role of Dr. Lilith Ritter is one of the film’s biggest improvements over the original: Blanchett portrays her as even more of an icy bitch than Helen Walker did. Cooper, who was actually Del Toro’s second choice after Leonardo DiCaprio dropped out, gives far and away his best performance to date. The way he just manipulates everybody who comes his way is mesmerising. The turning point is when he cons a local cop with his spiritualist act. 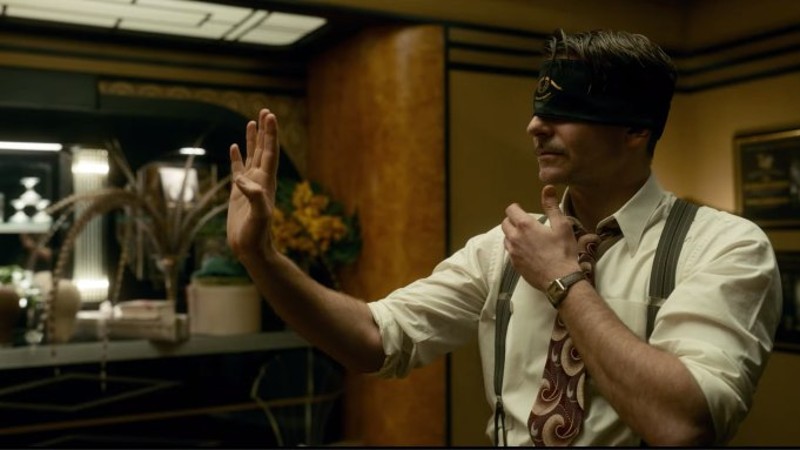 Mara was born to play Molly, the sweet “Mamzelle Electra” whose act consists of channeling electricity through her body while wearing a showgirl outfit. Mara is also the actor who most resembles their counterpart in the original 1947 film, and is just as good as Colleen Gray. Molly’s relationship with the strongman, Bruno (Ron Perlman), is less romantic in this new version. He is more of guardian. Perlman is the person who bought Del Toro a copy of the novel back when they were shooting Del Toro’s first feature Cronos (1993), and said it was the only film he wanted to remake. The main carryover from the director’s The Shape of Water cast is Richard Jenkins, who plays the Ezra Grindle. The way this obscenely wealthy auto tycoon feebly screams at Stanton, “you… dirty motherfucker, you dirty motherfucker” works very well.

Nightmare Alley is completely rooted in a brutal noir reality. There are no flights of fairytale wonderment unless you count the world of the carnival. Del Toro gives the audience an assortment of riches, with Clem’s makeshift museum of pickled punks, the funhouse (which is only in the film for a couple minutes is a stunning achievement in production design) and all the strange acts, from the spider-woman to the dog boy. Near the very end of the film you even see an extra made up as the real-life Koo-Koo the Bird Girl, who is best remembered for her part in Tod Browning’s Freaks (1932). That film looms large over both versions of the Nightmare Alley, and is the perfect double-bill choice to go with either version.

The production design is just to die for: the carnival is magnificently designed. The entire film feels very lived-in, and it’s so immersive that it’s a shame there wasn’t an IMAX versions exhibited. There is very little CGI in the whole film, except for fire, some background snow, and the sparks over Molly’s body. Del Toro also made a black-and-white version, and has said the carnival looks better monochrome, although he admits that Dr. Ritter’s stunning art deco office looks better in the gold, green, blue and red palette that Del Toro uses there.

It’s stunning that the film was shot on digital. You feel like you are watching a film from the ’40s, not the 21st century. It’s very much a black-and-white film in colour.

Nightmare Alley is everything you could want from a motion picture. It’s completely riveting, absolutely gorgeous, the story is top-notch, and the performances evoke the best of old Hollywood. If you don’t know the original film or novel, you will also come away with a very different meaning of the word “geek.” Finally, it’s important to mention that it’s a noir, and not a neo-noir—it has the pulpy atmosphere of the classic era, and is not a revisionist take on the genre. The film wears its noir credentials on its sleeve.

Nightmare Alley is now on all major VoD platforms

US meddling is an ugly monster waiting to be caged, argues Tiago di Mauro about Guillermo del Toro's latest flick - out in cinemas on February 14th [Read More...]