The Tromsø Film Festival opens in the Arctic Circle with a choice selection of the best films from the festival circuit; DMovies reports from the north of Norway

It’s cold, -4C and dropping. It’s snowing heavily. And the sun is due to rise above the horizon sometime next week. We’re at the only international film festival to take place above the Arctic Circle. The Tromsø International Film Festival opens its 32nd edition, in-person, and in the snow, if one is brave enough to watch a movie at the iconic open air cinema. A couple of days before the festival opened, Norway relaxed its virus rules, so 200 people can attend suitably sized venues rather than 50. Festival Director Lisa Hoen was determined to have an in-person event, even when Sundance and Rotterdam decided to go the digital route.

Tromsø offers an excellent programme of films, that mixes Nordic cinema with a carefully curated slate of the best movies on the festival circuit. It may be because it is in such a remote location that the Festival is so well placed to connect the disconnected in the wake of the pandemic. The competition serves personal favourites such as Panar Panahi’s Hit the Road (2021), Golden Globe winner and critics darling Ryusuke Hamaguchi’s Drive My Car (2021). Paul Thomas Anderson’s latest Licorice Pizza (2022) bustles with Paul Verhoeven’s Benedetta (2021) and the royal closing film is Pablo Larrain’s Spencer (2021). 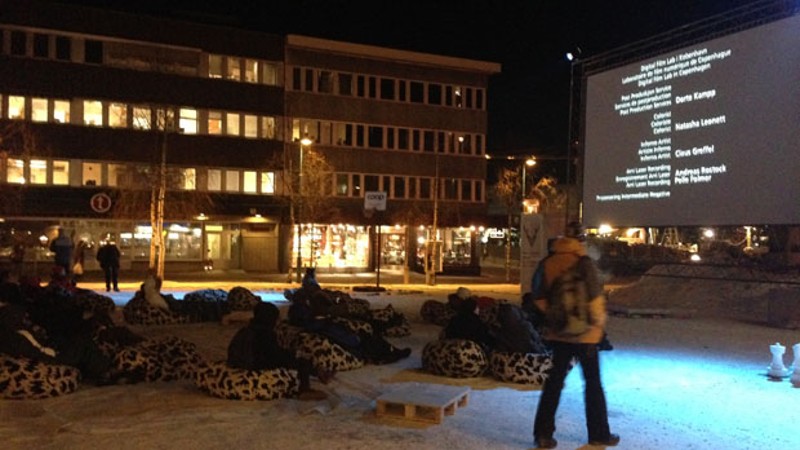 Fittingly, the festival opens with a Norwegian world premiere. A Human Position directed by Anders Emblem tells the story of Asta, a journalist whose life is haunted by a past trauma but who finds herself in the midst of a present case of social injustice. Hâvard Bustnes’ documentary Name of the Game charts the rise and fall of a Norwegian politician Trond Giske whose promising career came crashing following a series of sexual harassment allegations.

There are outdoor screenings in the morning for children in the couple of hours that the sky brightens before the adults brave the, well er, Arctic conditions, as darkness reigns over the winter months. There is a lot of charm to Tromsø and a big cinema culture. Pride of place is the Verdenstearet cinema – founded in 1916 – is the heart of the festival, which is a work of art in itself with an in-situ organ and murals on the walls. A reminder, if it were needed, that nothing beats watching movies in glorious picture houses.

The 32nd Tromsø International Film Festival runs from January 17th to the 23rd. DMovies will be reporting live all week!

Teenage boy meets young woman and they embark on a number of adventures across California and New York, in Paul Thomas Anderson latest paean to the 1970s - on all major VoD platforms on Friday, April 1st [Read More...]

Talk about a dirty movie; sex and violence abound in Paul Verhoeven’s lesbian nun odyssey, loosely based on a real-life story - on Mubi on Friday, July 1st [Read More...]