Almost ten years ago, a young woman made a film. Nothing so strange there. Except that Wadjda was the first movie to be shot in the Kingdom of Saudi Arabia. Haifaa al-Mansoor was forced to direct her actors hidden in a van by walkie-talkie or risk the ire of conservative passers by who couldn’t see a woman giving orders to a man.

It’s very existence is already a historic triumph, but watching the film almost a decade later at the Red Sea International Film Festival in Jeddah several things are apparent. One is that al-Mansoor is no longer hidden away. She is receiving a prize, giving talks and introducing the film herself. The other is that there is a new cinema that is beginning to expand in the Gulf state. We are a long way from perfect, but the progress being made as cinemas are built and the festival’s inaugural edition continues has to be celebrated.

But what about the film itself? Wadjda tells the story of a young girl (Waad Mohammed) who lives with her mother, attends school and longs for a bicycle so that she can beat her male frenemy Abdullah (Abdullah al-Gohani). She is cheeky, wearing her sneakers under her abaya, and getting into trouble at school. However, in order to get the bicycle she decides on reformation, joining in Koran class in order to win money in a competition for reciting part of the holy book. 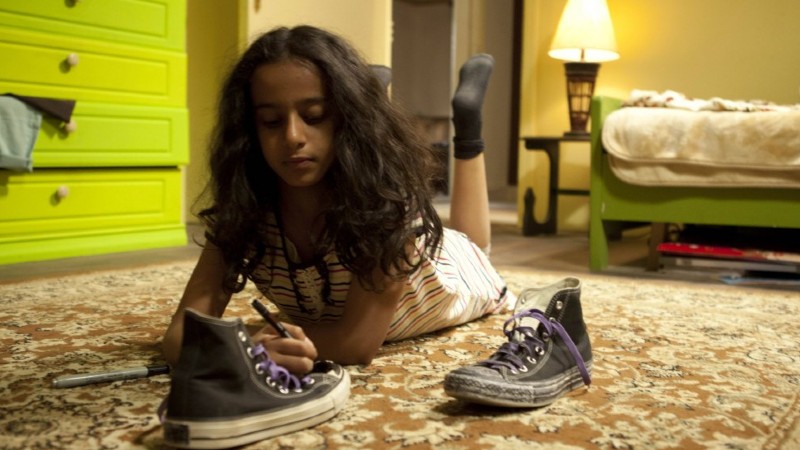 Meanwhile at home her mother is struggling with the fact that Wadjda’s father, urged on by a family keen for a male child, is in the process of taking another wife. The home is a place where Wadjda can live with a modicum of freedom, but almost every other aspect of her life is dominated by the restrictions placed on women and girls. This is also internalized, with her mother being appalled at her friend working in a hospital where she has to work with men.

Wadjda is a superb film. The performances of the children are wonderful and the weight of the situation weighs heavily on their futures. The Children know nothing else, and don’t even fully understand the rules of their own society. Wadjda is drawn to a pair of older girls who are trying to rebel in small ways, painting their nails etc. But her own mother’s fate and even her own matrimonial future, ironically underlined by her t-shirt which reads ‘I’m a great catch!’, seems bleak.

But al-Mansoor ultimately is an optimist. She sees the humour and the humanity in people. She sees a richness and complexity to the situation, and glories in Wadjda’s unbroken spirit. The last nine years seem to have cautiously endorsed that optimism. And young Wadjdas going to school now are free to ride their bicycles and in the future hopefully everything else.

Wadjda screened at The Red Sea International Film Festival, when this piece was originally written. On various VoD platforms on Monday, July 4th.