"Dirty gem"
Joe Wright’s Cyrano has all the luxurious panache of a box of very expensive chocolates - on VoD on Friday, May 27th

What is it with musicals these days? 2021 saw Leos Carax’s wonderful Annette smashes into Cannes, then we have Steven Spielberg revamping West Side Story and now Cyrano, Erica Schmidt’s broadway musical version of Edmond Rostand’s 19th Century play is given the big screen treatment by Joe Wright.

Peter Dinklage stars as the titular warrior – poet – wit and lover whose physical appearance (dwarfism in this case rather than the original nasal extension) makes him feel like an impossible lover to his lifelong passion Roxanne (Haley Bennett, pictured above). To complicate matters, Roxanne has fallen for Christian (Kyle Harrison Jr), an easy on the eye young soldier who struggles to find the word ‘inarticulate’ when describing himself. Cyrano volunteers to steer the course of young love by penning a series of love letters on Christian’s behalf and foxing rival nobleman Ben Mendohlsonn’s rape-ier ambitions.

Shot in Sicily during the pandemic from a screenplay by Schmidt herself, the film carves out space for itself away from its cinematic forebears. Joe Wright’s Cyrano has all the luxurious panache of a box of very expensive chocolates. Seamus McGarvey’s cinematography offers caramel-coloured candlelight and a first good day of summer look to the exteriors. This contrasts sharply with the frigid battlefields of the latter part of the film, when the tone tilts towards the tragic. 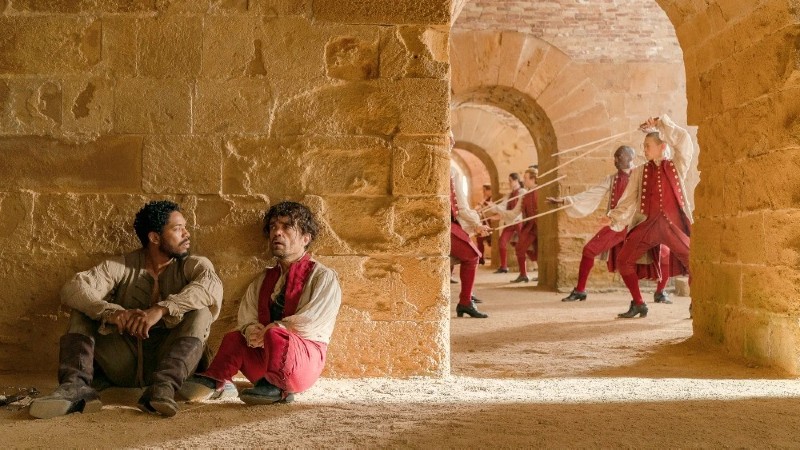 As a musical, the songs are all good, penned by Bryce and Aaron Dessner from The Nationals. But they tend to a low-fi feel, a sort of mumblecore melancholy, though Bennett channels her inner Kate Bush to deliver some soaring vocals. An early theatre scene features Dinklage shows incredible range, using his wit and rapping to take down a bully in a singing duel. A tour-de-force, Peter Dinklage takes the opportunity to seize the celebrated role and eat it whole. The performances are the film’s strongest point. Both Bennett and Dinklage played these characters on Broadway and throw themselves into their performances with genuine verve. Dinklage eats the entire role: witty, touching, with a creditable singing voice. Bennett is perfect as the positively scrubbed fresh faced girl who finds herself thirsting for some proper romantic love. The story needs to move around the gnarly aspects of the original story. The deception of Roxanne no longer feels as romantic as it was supposed to: and the film’s own discomfort leads to some contrived twisty turns to deny Christian his prize and so downplay the deception. Despite this downbeat ending, it is a real pleasure to feel the musical pushing in different directions. And my feeling is this is a grower.

Cyrano showed at The Red Sea International Film Festival, when this piece was originally written. In cinemas on Friday, February 25th. On VoD on Friday, May 27th.