Happiness doesn’t appear to belong in the coastal town of director Nathalie Biancheri’s British début feature Nocturnal, originally released in 2019 and playing the 2021 edition of the ArteKino Festival. Set in Yorkshire, Painter and decorator Pete (Cosmo Jarvis) scrapes by, an isolated figure outside of his doomed relationship with Suzanne (Amy Griffiths) and casual hook-ups. Meanwhile, seventeen-year-old track athlete Laurie (Lauren Coe), who has moved from Dublin struggles to fit in. Neither Pete nor Laurie have any power or influence, so it’s unsurprising that their paths should cross. Their combined status is akin to the conventional sombre tones of marginalised figures, lending the story a distinct British air.

The noticeable age gap and the secrecy of their friendship stirs in the audience concern about the perceptions of others, and whether this is an innocent friendship that’s doomed, or will it take on a darker incarnation. These fears are not dissuaded when Laurie begins to show her romantic interest in Pete.

Difficult to find a level of comfort, Nocturnal is a film tailored to appreciation instead of entertainment. Biancheri, like other British directors, including Ken Loach and Mike Leigh, understands that it’s not the directors place to entertain their audience, but to provoke their interest. She achieves this in phases – first the fear of where their relationship could lead, before a revelatory moment firmly decides the story’s intent.

Biancheri walks into the jaws of difficult human moments. Nocturnal finds itself in the shadows of the struggle of the human experience. The intention isn’t to be a social critique of the fallout from the relationship between a young impressionable girl and older man. Instead, the director is interested in hidden motivations that conflict with how her audience will interpret a situation. It’s a reflection of how we misinterpret in everyday life, and it’s an echo of the fear for vulnerable young people and women. 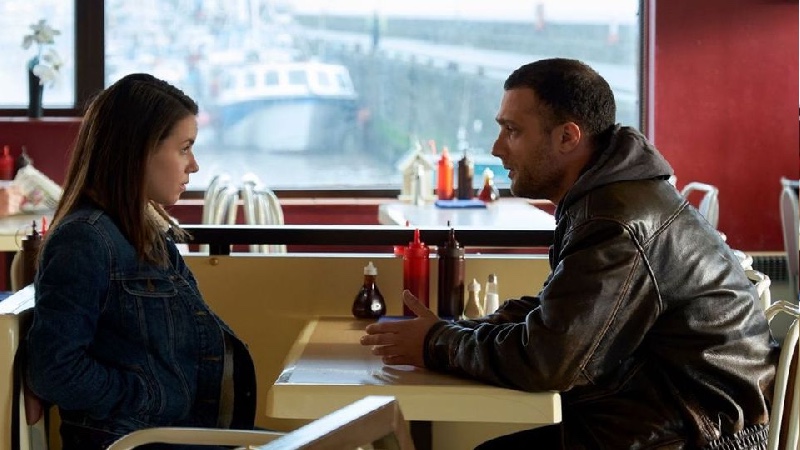 The revelation that reveals an unexpected connection between the pair feels awkward. We’re left to consider whether this is a genuine development in their relationship, or is it a manufactured one? Biancheri risks losing her audience, but we should consider whether Pete can play the role he’s meant to play, when he has never been asked to? How should Pete behave when Laurie, a stranger, is unaware of the connection they share?

While Laurie struggles with relocating, Pete has never been able to escape the town he swore he’d one day leave. The story becomes about entrapment – Laurie’s desire to sexually explore herself, to grow up, while her mother comes to find herself reminded of a reckless moment. The reason Pete might struggle to commit to his girlfriend is because the town is not where he wants to put down roots. He’s someone that has always been looking off into the distance.

The understated cinematography and the coastal setting complements the banal lives of the characters. The anxiety of being the adolescent outsider is a common and unpleasant experience many of Biancheri’s audience will have experienced. It’s easy for us to identify or sympathise with the young protagonist, who is ridiculed and looked down upon by her peers. She puts on a tough front, but she wants to be accepted. She echoes the nightmarish anxiety of wanting to grow up, to hit those milestones, that among her peer group are a form of competition, boosting or deflating one’s pride.

The adults themselves seem lost in the fringes of an existential crisis. They go through the motions, unaware of the potential meaninglessness of life. Biancheri’s characters work dead-end jobs, relationships are broken and unfulfilled, and they indulge in quickies out the back of work. It’s not a view that gives hope to adolescents that adulthood brings with it a brighter future. Nocturnal however, is neither optimistic nor cynical, it’s about the mixed tones of the human experience, indifferent to popular adjectives.

Watch Nocturnal online for free during the entire month of December only with ArteKino.

LOMO – The Language of Many Others

Drifting in and out of reality, the frustrated Karl finds greater solace within the privacy of his room than he does in the world outside - watch it for free online in December only with ArteKino [Read More...]

Wheelchair-bound woman has to sue her own family in order to undergo gender reassignment, in this sympathetic Polish doc about struggle and acceptance - watch it online for free during the month of December only with ArteKIno [Read More...]

Deep dive into the claustrophobic refugee experience in Germany, as a Syrian couple struggles to integrate - watch it online and for free during the entire month of December only with ArteKino [Read More...]