"Greasy movie"
An ex-soldier takes up a job as a carer for a woman and her dying mother, only to encounter an insidious presence in the house - British horror by actress-turned-director Romala Garai is on VoD on Monday, February 28th

Actress turned director Romola Garai’s feature début is a cry from femininity about the horror of what it is to be a woman in a patriarchal and misogynistic world. Ironically, she chooses to express this through the form of horror cinema, whose detractors label as misogynistic, and yet it can be said to hone in on the strength of femininity against unrelenting adversity.

Curiously, this cry comes through the attention to Tomaz (Alec Secareanu), an immigrant and ex-soldier from an unnamed country, trying to survive in London. Sister Claire (Imelda Staunton) offers him a place to stay with Magda (Carla Juri), a young woman whose days are devoted to caring for her ailing mother. In exchange for the rent free accommodation, Tomaz will maintain the decaying house. As he begins to develop feelings for Magda, he cannot set aside the feeling that there’s an insidious presence inside the mother’s room.

One of the interesting ideas Garai brings up is around the subject of forgiveness. Tomaz confides in Sister Claire that he tried to help someone, who was hurt as a result. He tells her, “Before your God, the ancients, they didn’t believe that you could forgive yourself. It wasn’t yours to give.”

Amulet is a moral play, a warning that we can spatially distance ourselves from our sins, but emotionally and psychologically our past is as inseparable from us as our shadow. The director opts to not rigorously explore the theme, instead she breaks our hearts by allowing Tomaz’s haunting memories to reveal how they were hurt. Sidestepping the intellectual approach to themes and ideas, Garai uses the reflection on forgiveness as an emotional device to deepen our interest in her broken protagonist, whose secret stings us like betrayal.

While certainly horror, the film is also a psychological drama. The story segues from the haunting experiences of war, the unpleasant experiences of the immigrant, and the unrelenting pressure to be a carer, into the fantastical realm of horror. 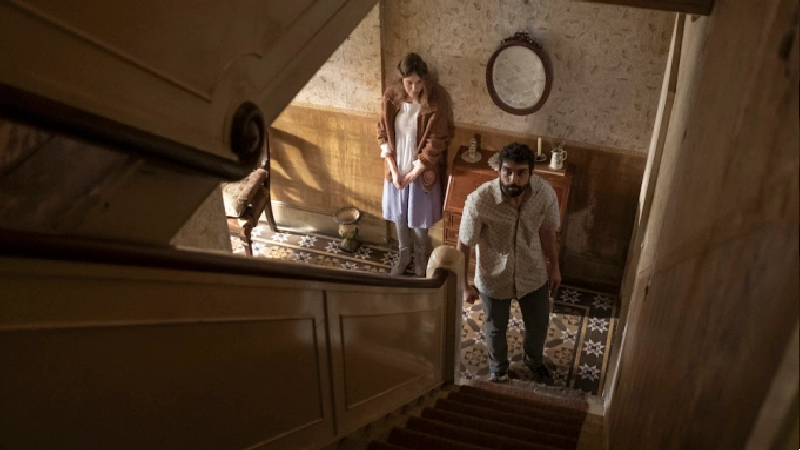 Progressing with a slow pace, Amulet is a gruelling watch, tapping into the hardships and trauma of its characters. What holds our interest is the hope of two lost souls finding one another, and the brooding and suspenseful atmosphere that in the final act descends into a full-blooded horror. Garai rewards our patience with some delightfully nuanced moments, from suspenseful jumps, to body horror and acts of insidious intent.

One of the tantalising things about Amulet is the friction between a dark and dank vision that leans towards British social realism, and the fantastical that requires us to suspend our disbelief. The teasing presence of an insidious horror is a means to give Tomaz a purpose, while Garai explores the psychological drama. The story is of a man haunted by his past that intertwines with a feminine revenge fantasy.

The clichéd genre tropes of masculine cruelty and women as victims are present. If there’s the idea that in war the first victim is innocence, by the film’s conclusion, have the female characters lost their innocence? Is there a metamorphosis from woman as victim, to woman as perpetrator? Amulet creeps out of the crevices of the vengeance found in the Old Testament, although the story leans more towards the Buddhist concept of the cycle of pain and suffering. The events of the film are only a moment in a beginningless cycle of suffering between men and women, that has no resolution. The interesting point is Garai presents a moment for Tomaz to break the cycle, but in his fear he rejects the opportunity, instead consoling himself in philosophical ideas about forgiveness.

In his past memories, we see him reading one of Hannah Arendt’s books, whose title is offscreen. The political theorist wrote on the subject of violence in the twentieth century, and if this is her 1970 work On Violence, it’s no coincidence that Garai has her soldier in a country at war reading this text. Violence feeds into the cycle of suffering we witness unfold in the story, and if the director is pursuing the emotional over the intellectual, she creates a space for the audience to enter the film. She invites us to bring our own knowledge of philosophy to bear in the critique of the story, through which the films intellectual nature emerges.

Amulet played at Arrow Video FrightFest Halloween 2021 and will be released in the UK on January 28th (2022). On VoD on Monday, January 28th.

Documentarist get skin-crawlingly close to three alt-right figureheads, revealing how their white supremacist views moved from the fringe to the mainstream - from Raindance [Read More...]