We have handpicked 10 dirty movies from the upcoming Raindance Film Festival and reviewed each one individually for you; the action takes place between October 27th and November 6th

Below are 10 dirty films carefully selected and analysed by our writers exclusively for you. They are a combination of movies we viewed earlier in the year, and some reviewed specifically for Raindance. Most importantly: they are dirty movies that will hit you like a ton of bricks. They are listed alphabetically. Click on the film title in order to accede to each individual review.

Book your tickets for Raindance now. And if you are an industry professional, grab now your House of Raindance Pass, network and meet our collaborators, join the Industry Forum and much more.

This bumbling, lo-fi take on Office Space (Mike Judge, 1999), turns up this fantastic sensibility to a truly absurd degree. In Diego’s (Eli Vargas) job interview for the mysterious company Data-Mart, his erratic boss-to-be Vasquez (Luis Deveze) touts the power of typists — saying that no amount of monkeys could ever compose anything approaching a sonnet. Despite only being able to type over 50 words per minute, Diego is hired. The staffing shortage is real. The timing of the film is apt, coming at a moment when people are debating whether or not we need to actually be in an office to do our work. 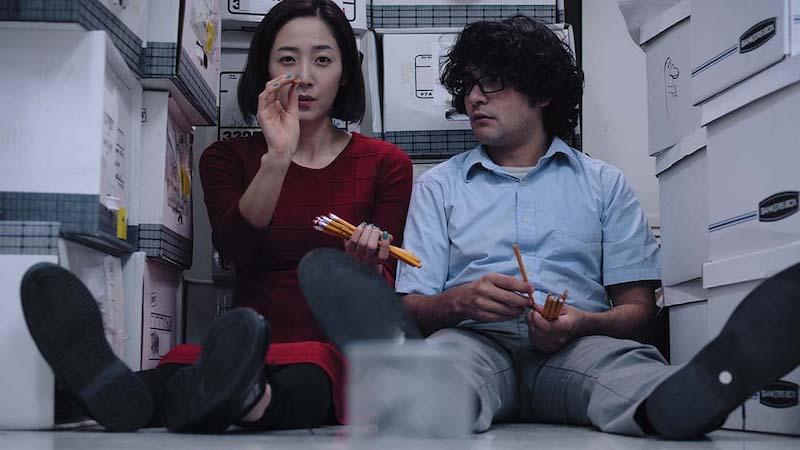 Tekehentahkhwa (Kiawentiio) prefers the nickname Beans to her actual birth name. She is on the cusp of adolescence, and grappling with decision whether to leave the Mohawk reserve in order to further her education. Suddenly, she is engulfed by an armed stand-off between the indigenous people and the neighbouring white communities over land control. The incident, which became known as the Oka crisis, eventually led to the reserve being isolated and vilified. An arduous fight for survival ensued.

Michael Caine is a cranky writer on a tour from hell, in Raindance’s opening film. Lucy Stanbridge (Aubrey Plaza) is desperate for a bestseller. Without one, she’ll be forced to sell the publishing house she inherited from her father. When she discovers an old contract that says the reclusive one time author Harris Shaw (Caine) owes her a book, Lucy sees an opportunity to hold onto her father’s legacy. Dragged along reluctantly on a book tour to promote his new novel, the first in more than 40 years, she struggles to prevent Harris’s antisocial outbursts going viral. As the two grow closer, secrets threaten their newfound relationship.

Richard (the late Nicholas Tucci) mutters to himself “broomstick and everything”, as his car, leaving the driveway, passes neighbour Mrs Start (Colleen Heidemann) clearing snow from the driveway with her brush. It is easy to see how this old woman, with her shock of upright grey hair, her single working eye, her strange mannerisms and indeed her interest in the occult, might be regarded as a witch, but Richard’s hearing-impaired young son Michael (Keaton Tetlow) rather likes her, even if, like many an artistic, imaginative boy of his age, he is scared of near everything else.

The darkness outside their snowbound house in the woods, the lightning from storms, the monster that may be lurking under or even on the bed – all these terrify little Michael, whose anxious point-of-view largely dominates Ben Charles Edwards’s Father of Flies.

The “most hated man in Britain” is never afraid to be the first on the frontline in struggle for LGBT+ justice and equality. Stephen Fry succinctly describes Britain most (in)famous gay activist: “Peter is a performance artist. He deserves an award for his extraordinary contribution to the lives of those who never heard of him”. The 90-minute documentary that follows, narrated by Ian McKellen and exec produced by Elton John and and his husband David Furnish, provides irrefutable evidence that the English actor is indeed right.

Peter Tatchell was born in Australia in a neopentecostal family, which he describes as “close to fundamentalism”. His stepfather was particularly controlling and homophobic. He feared his parents would report him to the police, at a time when homosexuality was a crime punishable with imprisonment. Peter moved to Britain both because of his family and because he wanted to dodge the compulsory military service, which was at odds with his strong anti-war views. He joined the Gay Liberation Front within just days of arriving in London.

Whatever supposedly makes Britain “great” — a moniker blasted upon countless placards when you arrive into a port of entry — it is not our approach to our migrant population, which must be one of the cruellest on the planet. Hostile, set during the boiling point of the coronavirus pandemic, shows how successive governments are slowing destroying British hospitality from the inside, creating an environment of fear and loathing amongst its most valued citizens.

Combining testimony — featuring immigration experts and Labour politicians — with stories from the ground, Hostile is a heartfelt and bitter exploration of policies that are downright evil. It does a fine job of explaining the context of empire and how it relates to crises ranging from the EU referendum to the Windrush scandal. 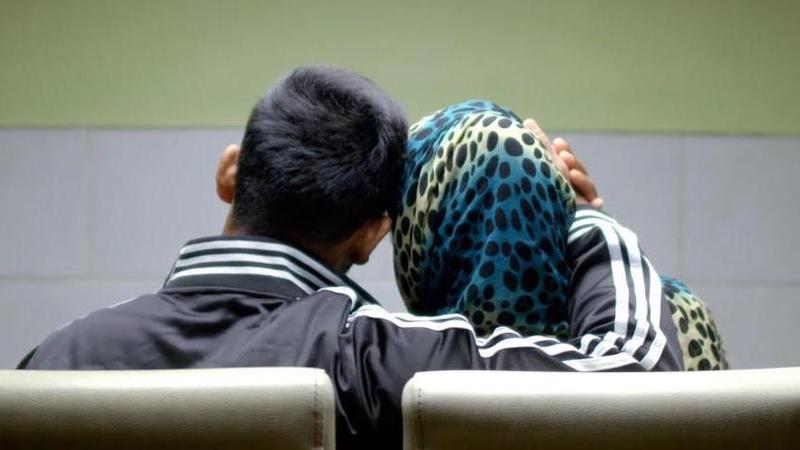 Portuguese couple in London engage in a battle against social services in order to save their three children from forced adoption, in this very Loachian family drama. Bela and (Lucia Moniz) and Jota (Ruben Garcia) live somewhere in suburban London with their three children, aged between 12 months and 12 years. The family struggles in order to make ends meet, with Bela unable to buy a new hearing aid for her daughter, and having to shoplift for home essentials. Bela’s mother in Portugal is unable to wire the money for her granddaughter’s device, instead suggesting that they request support from social services. Butthose who were intended to help the hapless family soon turn out to be their worse enemies. Listen won two major prizes last it at the Venice International Film Festival.

In this probing confessional, a frightened Lebanese gay man makes peace with his past – documentary premieres at Raindance. Although he was best known for his comedies, Oscar Wilde’s most honest came in the form of a letter, later published under the title De Profundis. Fuelled by the betrayal of his loved ones and his family, Wilde committed many of his most unvarnished thoughts onto paper as a way of exorcising any demons that were still swirling in his brain. Fast forward one hundred years, and another gay man uses this same method to move on from his past failings. What makes Miguel’s War so astonishing to watch is its unflinching resolve to allow Miguel Jeleaty the chance to tell his story without shame or embarrassment. The son of a strict Catholic father, Jeleaty watched streets demolished during the Lebanese War. Like many gay men growing up in a war zone, Jeleaty had no one to trust, and couldn’t turn to the support of his Syrian mother. We don’t often get to see someone speak so nakedly about their lives, and Jeleaty’s story is extraordinarily brave to watch.

9. The Noise of Engines (Philippe Gregoire):

There are films that feel like they’re telling a story, then there are those that feel like acts of creative expression. Philippe Grégoire’s Canadian drama, The Noise of Engines emphasises the latter. It liberates itself from storytelling, from inside the narrative structure, and employs an art house aesthetic to boldly express itself. Alexandre (Robert Naylor), a fire arms instructor at the Canadian customs training facility returns to his hometown in Quebec after being placed on compulsory leave. When sexually explicit drawings that include him begin to appear around town, the police suspect that he’s responsible. Meanwhile, he strikes up a friendship with a female drag racer. 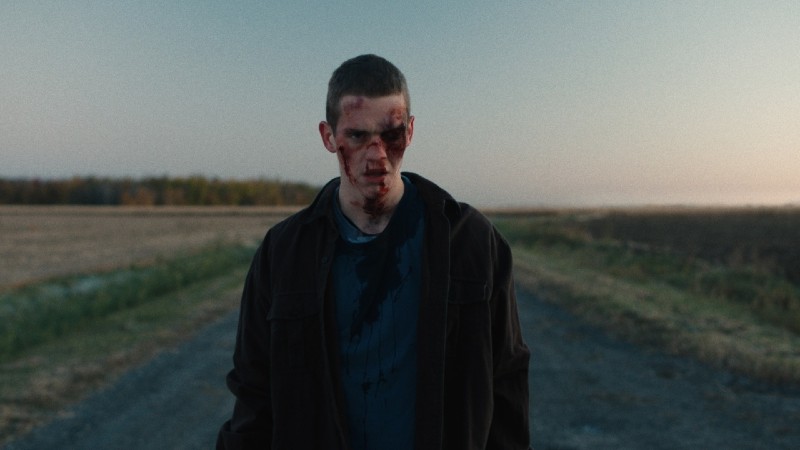 A failed marriage proposal stunt unleashes a number of unexpected events on a young German couple, in this exquisite debut feature. It’s his younger brother’s wedding, and Julian has an announcement: love is such a wonderful thing, something he sees every time he looks at his girlfriend Marie, with whom everything is fun, with whom everything makes sense. As guests ready their phones, taking her hands in his, Julian proposes to Marie. *Hushed gasps* Aww, how romantic! No, nein, nicht, wrong: public proposals are never good. Add this scene to the pile of evidence for that conclusion.

Second Thoughts is also pictured at the top of this article.

Book your tickets for Raindance now.

The Raindance Kid speaks up!

DMovies's editor Victor Fraga talks to Elliot Grove, the man behind London's favourite film festival entirely devoted to independent cinema (which starts on the 27th); they talk about "downtrodden" movies, genre, the future of online screenings, and more. [Read More...]

The Raindance Film Festival returns on October 27th: here’s what to look out for!

Find out what's playing in the 29th edition of the UK's favourite film festival entirely devoted to independent cinema, and book your tickets now! [Read More...]