Jim Cummings made a big splash at SXSW three years ago with Thunder Road, where it won the Grand Jury prize. It became a huge sleeper hit in France. He has since made the werewolf comedy The Wolf of Snow Hollow (2020). This third film, The Beta Test, is a very different kind of movie, although it falls into the same trap as his first two – all three end up feeling like acting class exercises.

Cummings stars in all his own films, and this is the first time where he has co-directed, being joined by PJ McCabe. It’s very much a post-#MeToo movie in which Cummings plays Hollywood agent Jordan, who is struggling to navigate the landscape of the film industry in the wake of the Weinstein scandal. Jordan hasn’t been the best-behaved person in the past, but he’s reining it in now to hang on to his job. He’s about to marry his fiancée Caroline (Virginia Newcomb), when one day he receives a purple envelope that gives him the opportunity to have an anonymous fling with someone. Once the card is filled out, he should find out where to go for this liaison. After that, his life starts to crumble around him – is it a conspiracy in the vein of Eyes Wide Shut (Stanley Kubrick, 1999)? In the process, he loses his identity. 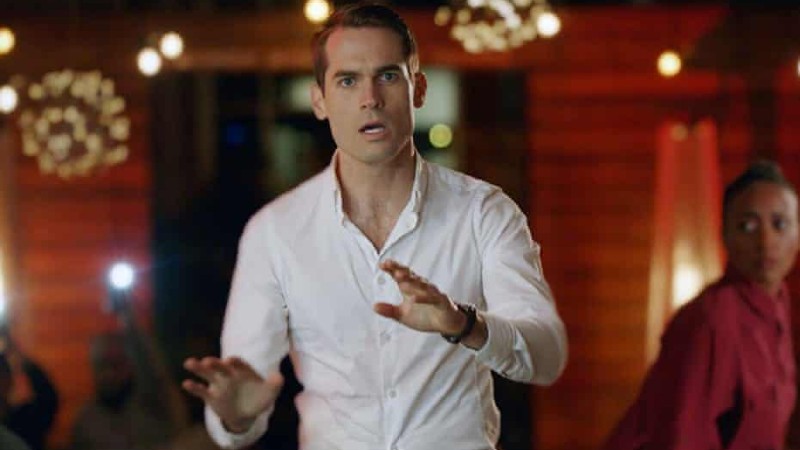 It’s a film with what should be a very interesting concept, and has something to say (especially about people’s Internet lives, as it goes deeper into that than it does regarding relationships between men and women in Hollywood). There’s a good section exposing the conflict between writers and their agents, but the problem is that it doesn’t have enough of a bite. Cummings just seems like a nice guy, too well controlled to really be acidic about Hollywood.

Both of the films he has done since Thunder Road are much more ambitious in scope and theme. A quasi-psychological conspiracy thriller is a step forward in terms of complexity, but Cummings is still working on slim budgets, and that leaves him without the funds to realise his vision. Cummings has both ambition and talent. He needs to do a bigger film, and leave the self-indulgent scripts and his almost manic, David Byrne-like persona behind.

The Beta Test premiered at Grimmfest. It is in cinemas on Friday, October 15th. On VoD on Friday, July 1st.