Andrea Arnold’s new documentary condenses the life of a dairy cow into 90 minutes. It may seem a departure for director of the Fish Tank (2009) and Season 2 of HBO series Big Little Lies but Cow fits her fascination with female vulnerability and harsh nature; this is the same Andrea Arnold whose elemental adaptation Wuthering Heights (2011) featured the slaughter of sheep and rabbits.

The filmmaker takes an equally unflinching look at the life of Luna (AKA 1129), as she is probed, penned, milked, branded, milked, impregnated and milked again on an unspecified British farm. Rather than Cowspiracy-style (Kip Andersen and Keegan Kuhn, 2014) polemic, Cow is a fly-on-the-eye documentary from Luna’s point-of-view. We are not told what is happening because she doesn’t know either.

Arnold’s approach is empathetic without kowtowing to sentimentality; you do not have to be Dr. Dolittle to recognise a moo of distress. Her only intervention is the humorous injection of pop music, including a mating sequence set to a sexy R&B jam coinciding with a bizarre fireworks display. She also pipes a music station into every scene where the cows are milked by machines, possibly as a joke about the cruelty of being forced to listen to Radio 1. 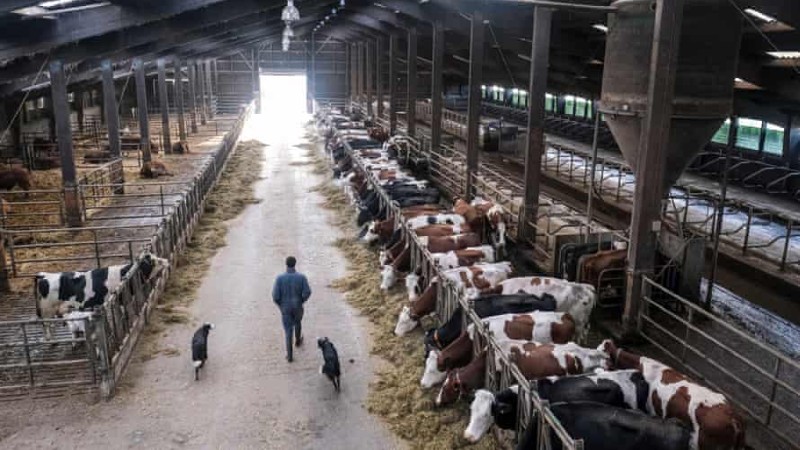 Using a relatively humane farm is a good choice since most people are aware by now of the horrors of intensive agriculture. Animal treatment has come a long way since the Parisian slaughterhouse of Blood of the Beasts (Georges Franju, 1949) but Cow exposes the big little lies of the organic farming industry in all its gory detail, requiring a strong stomach (or four) to witness Luna being hooked up to pumps resembling a petrol station and repeatedly inseminated as in some bovine dystopia.

There is a stark irony to a farmer saying, “You’re free!” to the cattle as they are led off a truck and straight into a pen. They eventually get to graze in an open field but the peaceful mood soon curdles and the end will come as no surprise to anyone who has ever eaten a beef burger or watched No Country for Old Men (Coen brothers, 2007).

Not so much a nature documentary as a film about human intervention, Cow is a distressing and bold insight into another animal’s experience and the reality behind our consumption. By the time the credits roll, viewers may find their tolerance for dairy significantly lower than when they went in.

Cow premiered at the BFI London Film Festival, when this piece was originally written. In cinemas on Friday, January 14th. On Mubi on Saturday, Saturday 12th. On all major VoD platforms on Friday, March 11th.

In this beautiful documentary, Victor Kossakovsky offers us an insight into the workings of the everyday animal: a pig and her piglets - film exec produced by Joaquin Phoenix is on VoD on Monday, July 5th [Read More...]

We sat down with the directing duo behind Space Dogs, an experimental and deeply disturbing doc depicting canine life in a never-seen-before way - live from Locarno [Read More...]