"Dirty gem"
Seemingly missing for 10 years, the titular animal is back in town-and this time he wants revenge on his ex-girlfriend's dad - in cinemas on Friday, November 5th

One of the film’s most chilling moments comes early: David Hayman plays Norm, a mob boss, clearly more interested in peace than penance. He turns up at a factory with “Bull”(Neil Maskell), his most hardened subject, and future son-in-law. When negotiations turn sore, Bull chooses to lop off the fingers of the man they’re seemingly working with, and Hayman looks on with those barren, beady eyes. Hayman is electrifying, delivering one of the truest mob performances in a British crime drama since The Long Good Friday (John Mackenzie, 1981), his hard Glasgow inflections striking fear in the hearts of everyone.

The film centres on a conflict between Bull and his assailants, his eyes brimming with rage at the vendetta he is set on completing. By that time, his ties to Norm have soured, and the mob king wants him dead, clearly still raging from a past encounter. Filmed against the backdrop of a changing England, the camera focuses on the fading clouds, culminating in a strangely spiritual look at the crime world. Then there’s Norm, searching for Bull, clearly aching to complete the work that goes beyond crime and community. True, the film sounds like The Godfather (Francis Ford Copolla, 1972) on paper, but this is a much more incendiary affair, and any punishments are delivered not with a Sicilian kiss, but a barbed threat. Norm turns to Bull’s mother-eighty three and ailing- with the promise that if she won’t voluntarily give up information, then he’ll have to beat it out of her. 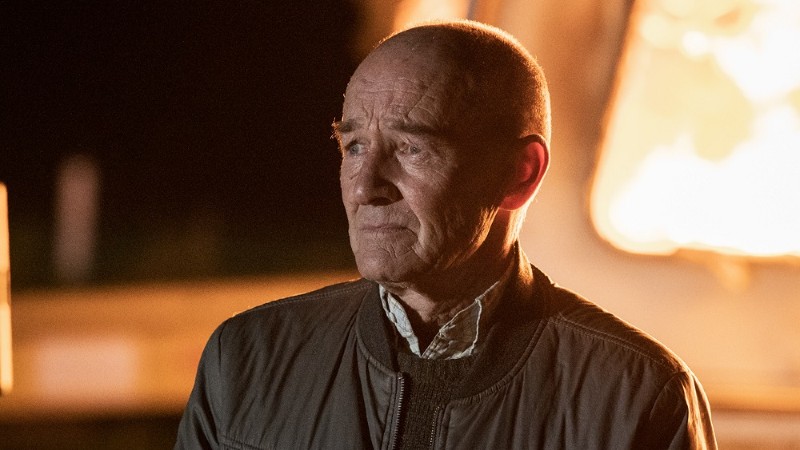 This being England, the mafias find themselves drenched in rain, cars passing one another in a hurry to escape the inclement weather. Seated behind a plant, Bull sees his erstwhile father in law driving away, the pain growing stronger in his face. Maskell is strong, every bit the foil to the plot, but without Hayman, there is no film. Avoiding all attempts to play up the pantomime kingpin, Hayman strikes fear by mounting every word on top of itself. “I just want everything to be very, very pleasant,” he tells Bull, “I’m Aidan’s Granddad.” Weirdly, for such a nefarious man is the voice of a concerned parent, who simply wishes the best for his daughter. Whether it’s his character failing, or a frivolity, it still serves him in some of the film’s better scenes.

It’s not the axes that deliver the most harrowing blows, but the jagged words, every syllable a threat, every action done with tremendous consideration. Like Don Corleone, nothing is personal, but he’s more determined to do what’s just right than to do justice for his “business.” Norm’s an original character, bringing pathos and passion to a genre that has been done to near death in recent years. Well, that’s so typical of Scotland to bring needed balls to the “Brit Grit” genre!