Based on Emmanuelle Bernheim’s autobiographical book about her father’s desire to die, Francois Ozon’s new film deals with a topis the auteur has successfully handled in the past, in Time to Leave (2005): an impending death combined with family confrontation and alienation. The difference is that Andre Bernheim, the dying protagonist of the 2021 film, is much older than Romain, the lead of the movie from 16 years ago. The former is aged 85, while the latter is just 31. What both characters have in common is that both are gay men.

Andre (Andre Dussolier) has suffered a stroke, leaving him bedridden and barely able to speak. He undergoes a gastrostomy, and is unable to control his bowel movements. His daughters Emmanuelle (Sophie Marceau) and Pascale (Géraldine Pailhas) are fully supportive and constantly by his side. But Andre has lost the desire to live. He claims he is no longer inhabiting his own body. One day, he asks Emmanuelle: “please help me to finish it”. At first, she’s outraged and refuses it. The doctors attempt to change his mind by prescribing him various anti-depressents.

Emmanuelle eventually decides to assist Andre: “I could never say ‘no’ to my father”. She conducts a quick internet search and contacts an assisted suicide organisation in Switzerland. Pascale is supportive of their decision.

But their plans aren’t as smooth as Emanuelle anticipated. A much younger man called Gerard (Grégory Gadebois), presumably a much younger lover, has other plans in store. And euthanasia is never as straightforward at seems. There are very large logistical hurdles in reaching Switzerland. the French law isn’t on their side. Emmanuelle and Pascale could face five years in jail and be fined €75,000 each if they assisted their father’s suicide in any way. Andre is determined to forge ahead nevertheless. 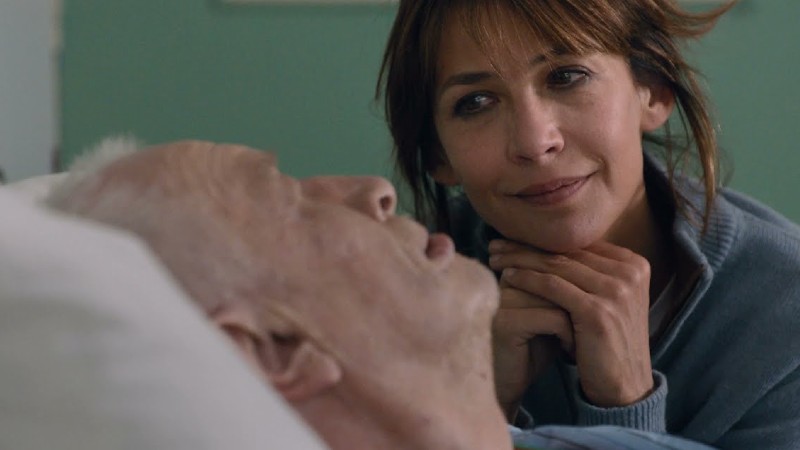 One of the interesting twists of fate is that Andre’s condition improves shortly after he decides to die. He is discharged from hospital, his G-tube removed and his speech becomes entirely intelligible, if a little slurred. His resolve to depart, however, remains unshakeable. At times it borders on the selfish and whimsical. Everything Went Fine raises the doubt: is it morally acceptable to demand to die when such death could have horrible repercussions for your loved ones?

Francois Ozon’s 20th feature film showcases two divas of European cinema at old age. Charlotte Rampling plays Andre’s wife Claude de Soria, an sculptor with “a heart of cement” (according to Andre). Despite’s her husband’s homosexuality, the two never separated. Yet they barely talk to each other. Asked whether he wants to see to his wife before his departure, Andre says: “she’s already dead”. Fassbinder’s favourite Hannah Schygulla plays the Swiss lady intended to facilitate the suicide. She is kind and caring, yet practical and phlegmatic. Ozon has a habit of paying tribute to his favourite female actresses by giving them small and poignant roles. He has done the same to Jeanne Moreau in Time to Leave, Jacqueline Bisset in The Double Lover (2017), and others.

Despite its highly controversial topic, Everything is Fine is not one of Francois Ozon’s most poignant movies. The performances are often impassive and unemotional, the characters exhibiting a large degree of stoicism in the face of adversity. This is not a punch-in-the-face type of drama, but instead a patient and resigned one.

Everything Went Fine showed at the 69th San Sebastian International Film Festival, when this piece was originally written. In cinemas and also on Curzon Home Cinema on Friday, June 17th. On all major VoD platforms on Friday, July 15th