Marianne (Binoche) arrives at the a job centre in the bleak and soulless town Caen claiming that she has just divorced her husband and is seeking work for the first time in 23 years. She has to start from the very bottom: cleaning toilets. Before she lands such a job, however, she has learn how to “sell” herself to her prospective employer, by describing herself as “jovial”, “enthusiastic” and “a keen team worker”.

In reality, Marianne is a famous writer from Paris. She is working on a novel exploring the hardships of workers at the very bottom of the employment pyramid: the “invisible ones”. Marianne is taught how to react after being blanked by non-invisible people: should she smile, should she say hello again or should she simply ignore the rude gesture? Marianne is a very good actress, swiftly blending in with her new workers, making friends and possibly starting a romantic connection with a job-seeker called Cedric.

The audacious writer wants to take her experience one step further. And so she accepts the job from “hell”: she becomes a ferry boat passenger cabin cleaner in Ouistreham (a small port and ferry harbour serving Caen). She has no more than four minutes to clean each cabin with two beds each. There are 230 cabins. She has to work triple shifts, and is left with her body aching by the end of each marathon. She earns the minimum wage of little above €7 an hour. 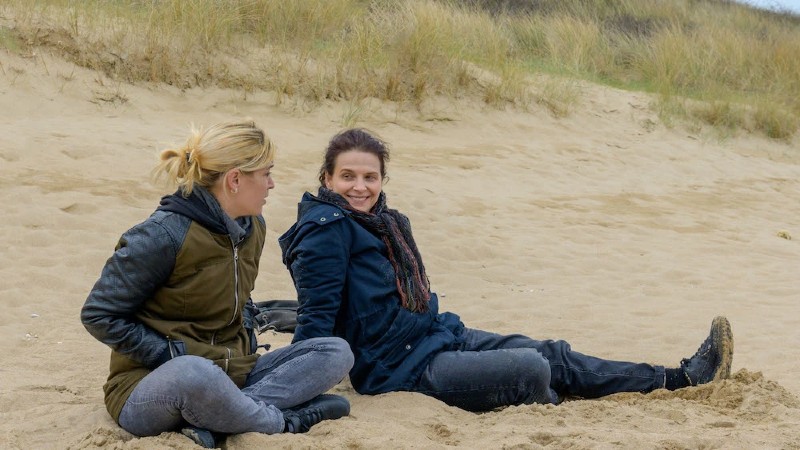 Despite the inhumane amount of work, there is a real sense joy and companionship. Marianne creates a strong bond with her co-workers Christele, Marilou, Justine, and even with her super-demanding manager Nadege (who works just as hard as those under her purview). These people hardly bemoan their predicament. In fact, they think that they are lucky. Christele tells Marianne some people have it much worse: Sudanese refugees have to wake up before dusk and march down the road at dark the in order to avoid the police, who routinely seize their shoes and blankets.

Binoche delivers a very convincing performance as a character who acts (pretends to be someone else). The French actress is no stranger to such roles. In Abbas Kiarostami’s Certified Copy (Abbas Kiarostami, 2010), she plays a store owner pretending to be married to a writer. Marianne the cleaner is quiet and kind, a little sparkle in her eye suggesting joy and contentment in her trivial existence. Marianne the writer isn’t too different, as viewers will find out at the end of this heartwarming, quietly upbeat drama.

French director Emmanuel Carrère director examines the very nature of the creative process: is it OK for the artist to lie to their subjects? Is art intrinsically exploitative? Is acting synonymous with pretending? And is it the duty of the author to liberate those depicted in their creation? These ethical questions of course extend from the world of literature to the world of cinema, making Between Two Worlds a work of dialogue between two art forms.