"Filthy genius movie"
Biopic of gay-friendly and subversive televangelistic fallen from grace reveals a woman defined by faith, wealth and controversies - on various VoD platforms on Friday, May 6th

The eyes of evangelist, singer, author, talk show host, and television personality Tammy Faye (Jessica Chastain) have seen it all. She was born in poverty in Minnesota to a divorced mother in the 1940s, an affront to the country’s morals at the time. She married her her university sweetheart Jim Bakker (Andrew Garfield) at the age of just 18. Alongside her husband, she became one of country’s most recognised televangelists and also a multimillionaire, basking in exorbitant luxury. She fell from grace in the late ’80s/early ’90s, after her husband’s imprisonment. She fell into obscurity, but eventually picked herself up.

Chastain delivers a stunning performance as the squeaky-voiced, jolly and charismatic televangelist. Tammy’s dolly looks at youth made her look like conservative caricature of Betty Boop, whom both Tammy and her husband admired. At old age, her pearly eyes and fleshy lips – both highlighted permanent make-up and eyelashes – made her look like a caricature of herself. Tammy was ostentatiously vulgar and adorable, both at once.

Tammy Faye Bakker demanded that she should have her own voice, in an environment dominated by extremely reactionary men on an overt crusade against progressive values. She became a prominent voice in Pat Robinson’s (Gabriel Olds) television show 700 Club (on CBN), and also on the channel’s rival PTL Club. She insisted in calling sexist and arrogant Reverend Jerry Falwell (Vincent D’Onofrio) by his first name. Far more significantly, she spoke her on mind live on national television to tens of millions of viewers. In 1985, she interviewed Reverend Steve Pieters, an openly gay minister living with HIV, and urged all Americans to accepted each other regardless of their HIV status and sexual orientation. She seemed sincere and speaking from her heart. The audacity of the gesture was breathtaking.

On the other hand, he extravagant lifestyle of the Bakkers did not go without notice. Nor did their extortion techniques. They insistingly demanded that their followers (whom they called “partners”) donated as much money as possible (as is commonly the case with evangelical preachers). Telephones rang non-stop with callers keen to make sizeable donations. Such images were broadcast live on television, urging others to pick up their own telephone and do the same. Tammy’s mother became the voice of conscience, consistently denouncing the tactics and questioning her daughter’s profligate wealth. 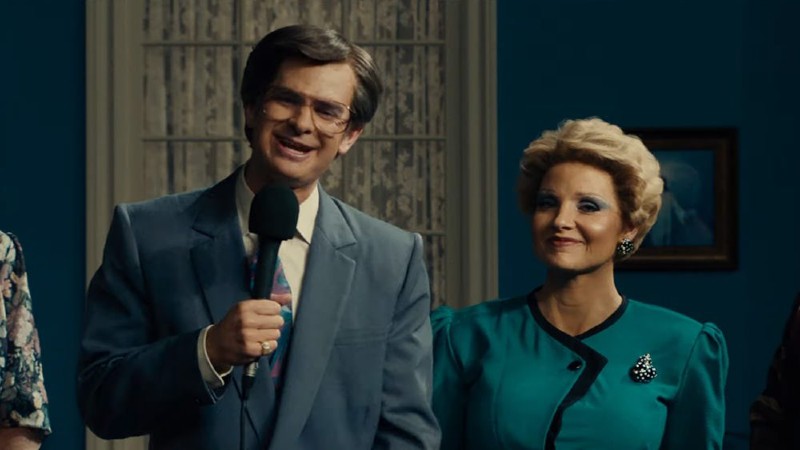 Throughout the ’80s, the newspapers accuse the Bakkers of widespread fraud. Jim hit back, saying that the secular media was evil. Pagans were conspiring against them because they did not want Americans to hear the word of the Lord. Eventually, his associated Falwell and Robinson too against turn against him, accusing him of homosexual tendencies. The movie neither confirms nor denies these inclinations, however Tammy’s dissatisfaction with her husband in bed suggests that this was indeed the case. Eventually Jim goes to jail, and all of their assets are seized. It takes 10 years for Faye to score a gig again, when she is finally invited to sing at the Oral Roberts University.

I must confess I had never heard to Tammy Faye prior to watching this movie, and I cannot comment on its historical accuracy. A quick Wikipedia search suggested the events portrayed in the are mostly factual, despite the omission of her second marriage in 1993. Either way, this is a very effective tearjerker. And as such it made my eyes very wet, particularly as Tammy urged her viewers to embrace openly gay HIV patient, and sang The Battle Hymn of the Republic after a 10-year hiatus following her husband’s imprisonment. Glory, glory hallelujah. Tammy’s truth is marching on.

The Eyes of Tammy Faye premiered in the Official Competition of the 69th San Sebastian International Film Festival. It received a very enthusiastic ovation. It also played at the Tallinn Black Nights Film Festival. It’s in cinemas on Friday, February 4th. On Disney + and Google Play on Wednesday, March 23rd. On Apple TV, Prime Video, Rakuten, Sky Store and CHILI on Friday, May 6th.