There are films that feel like they’re telling a story, then there are those that feel like acts of creative expression. Philippe Grégoire’s Canadian drama, The Noise of Engines (Le bruit des moteurs), screening in the New Directors Competition at the San Sebastian Film Festival, emphasises the latter. It liberates itself from storytelling, from inside the narrative structure, and employs an art house aesthetic to boldly express itself.

Alexandre (Robert Naylor), a fire arms instructor at the Canadian customs training facility returns to his hometown in Quebec after being placed on compulsory leave. When sexually explicit drawings that include him begin to appear around town, the police suspect that he’s responsible. Meanwhile, he strikes up a friendship with a female drag racer.

Grégoire shows maturity beyond his years in his approach to the cinematography. There are scenes in which he chooses to let the scene feed off the quirky humour and energy of the performances, instead of camera movement and edits. These creative choices lend the film a playful vibe, complemented by the playfulness with dreams and nightmares merging with his waking state.

The American filmmaker Howard Hawkes preached to not try too hard with comedy, and here there’s an effortlessness to the quirky humour. Grégoire trusts us to understand why something is funny. He doesn’t pander to the crowd to try to illicit a laugh – if you don’t get it, so be it. He has a knack for taking a scene such as Alexandre’s meeting with his supervisor at the beginning of the film, and underling a serious disciplinary conversation with humour. The comedy seems to be an irreverent dismissal of authority and institutions, empowering Alexandre at any cost. 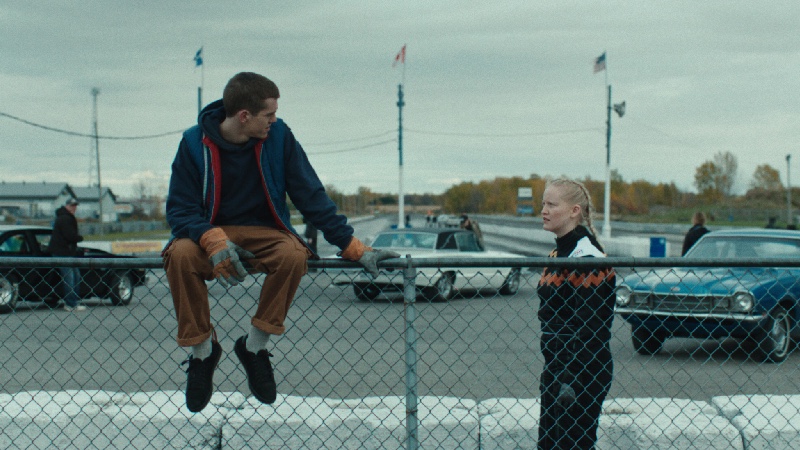 A theme of The Noise of Engines is the attempt by characters in authority to silence the sounds of sexual impulses. The repression and the stigma of sexuality is at the heart of the film. Authority is either positioned as symbolic of the hypocrisy about sexual expression, or there’s a sign of potential latent sexuality, opposite the fire arms instructor, with the gun as a sexual symbol, and his own sexual inclinations that are deemed perverse.

Grégoire confronts the reality that there comes a price to be paid for expressing oneself, or Alexandre is yet to find his place in the world. His interaction with the drag racer gives him hope that his social tribe is out there somewhere.

The Noise of Engines can be viewed as both a cynical and an optimistic tale. We see a character arrive at a junction in his life where he’s forced to confront his dissatisfaction. He has settled for a career with the customs authority, but he’s trapped, as much as he was in his home town as a young boy, with few opportunities. We’re offered no neat and tidy resolution, but for the first time, Alexandre may be in control. This is where expression over story is emphasised, unafraid to leave questions unanswered, or the narrative not fully developed. We’re left to debate for ourselves how to segregate the weight of cynicism from optimistic hope.

The Noise of Engines played at the San Sebastian International Film Festival 2021, when this piece was originally written. It shows at the Raindance Film Festival, taking place in London between October 27th and November 6th.

High school student embodies the quiet liberation of a country still grappling with the ties of a reactionary past - honest and profound Argentinean drama premieres at the San Sebastian Film Festival [Read More...]