"Mostly clean movie"
Terence Davies gives English poet and anti-war activist Siegfried Sassoon a detailed yet protracted and monotonous biopic, too concerned with the writer's sexual life - in cinemas on Friday, May 20th

Hailed as one of the most eagerly anticipated films of the year, and featuring fast-rising Scottish heartthrob Jack Lowden at the lead, this biographical drama contains abundant information and numerous poems by the controversial English soldier and writer. Enough to educate a film critic such as myself with no prior knowledge of the scribe. Sadly, I cannot extend the comment to entertainment. Benediction is a highly formulaic biopic, lacking freshness and edge. I left the magnificent Cine Kursaal by the River Urumea feeling bored and cold.

The movie opens with images from WW1 combined with a voice-over of Sassoon’s pacifist writings. He describes the horrors of the conflict, constantly questioning the very nature of war. He believes that what started out as a legitimate gesture of defence soon morphed into an act of aggression. Next we see 30-something soldier Sassoon (Lowden) challenging his superiors and consequently being sent to a mental institution in Scotland. Officers were reasonably lenient, as his failure to obey could also be interpreted as treason, and he could have faced the death penalty instead. At the institution, Siegfried begins a relationship with Wilfried (Matthew Tennyson), but the man is soon deemed fit to fight and the two are separated. Wilfried is killed in combat, while Siegfried moves back to London.

He becomes a famous poet in his own right in the British capital, and begins to frequent elite clubs. He engages in a number of affairs, most notably with the famous film actor Ivor Novello (Jeremy Irvine). Ivor is extremely charming and attractive, if treacherous and promiscuous. The dialogues are dotted with snide remarks, the bitchiness often associated with homosexuality. These conversations are interspersed by further images of war and Siegfried’s poems. The outcome is a little awkward. The gay vituperation blends with Siegfried’s sombre and stern poetry in the same way oil mixes with water. 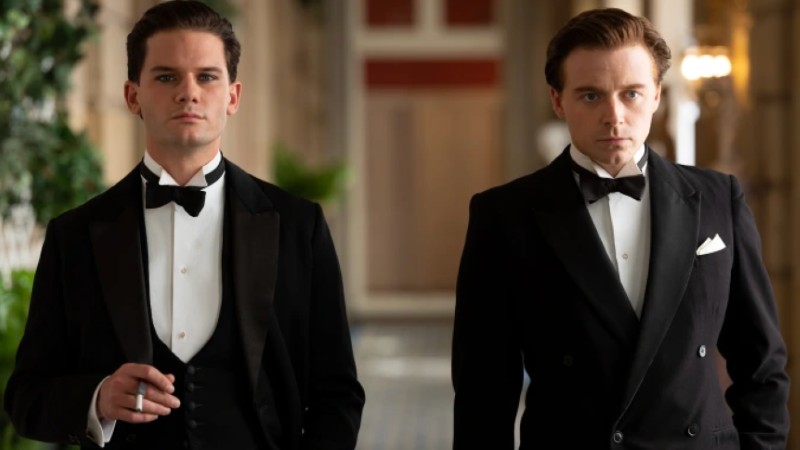 A lot of attention is given to Siegfried’s prolific love life. I almost lost track of his lovers: Wilfried, Ivor, Glen and Stephen. I may have missed one or two. Siegfried has a remarkably prescriptive taste in men: they all looked roughly the same. His mother describes Ivor: “Just another pretty young man”. The big problem is that the chemistry between Siegfried and the various males is as effervescent as a bottle of Coca-Cola left open for a week. And the deprecating conversations are too contrived. Terence Davies, who also penned the film script, is not as skilled a writer as the subject of his movie.

Siegfried ultimately marries a woman called Hester Gatty (Kate Phillips), but not because of her looks. He was seeking stability and an heir, Hester being fully aware of her spouse’s sexuality from the outset. Eventually, the film fast-forwards three decades in time and we see an ageing Siegfried and Hester with their adult child George. Old lover Stephen visits the couple. The film zigzags back and forth in time in the last 15 minutes, a narrative device entirely unnecessary. At 137 minutes, Benediction overstays its welcome. It could have done with fewer minutes and lovers, concentrating on the poet’s artistic prowess instead of his sexual conquests.

Benediction premiered in Competition at the 69th San Sebastian International Film Festival, when this piece was originally written. Out in the UK in October, as part of the BFI London Film Festival. In cinemas on Friday, May 20th (2022).