"Greasy movie"
Mute boy is trapped in a flat with a shapeshifting Arab entity, in this surprisingly creative, low-budget American horror - in cinemas Friday, September 17th

The horror genre keeps going back to the well of The Monkey’s Paw, the short story by W. W. Jacobs in which a family is granted three wishes only to learn some valuable life lessons: be careful what you wish for, be thankful for what you have and for god’s sake be specific.

Set in the 1980s when kids in popcorn movies reigned supreme, The Djinn exclusively concerns a mute boy (Ezra Dewey) and his father (Rob Brownstein) who works as a DJ (presumably as some sort of djoke). Like a parent-swapped The Babadook (Jennifer Kent, 2014) they move into an empty apartment where young Dylan finds The Book of Shadows and swiftly summons a djinn, the shapeshifting spirit of Arabic mythology.

What this book is doing there is immaterial to the dark fairytale that follows, a minor masterclass in simplicity and suspense. The descriptor “self-contained” is overused but this is the real deal, never venturing beyond the walls of the claustrophobic apartment. When his dad is out on a night shift, Dylan is stalked around the two-bed labyrinth for a constricted 80 minutes. Impressively played by Dewey, he proves as resourceful as Kevin from Home Alone (Chris Columbus, 1990) without the attitude. The scares are as well-placed as Dylan’s household defences, keeping the film djumpy for the short duration. 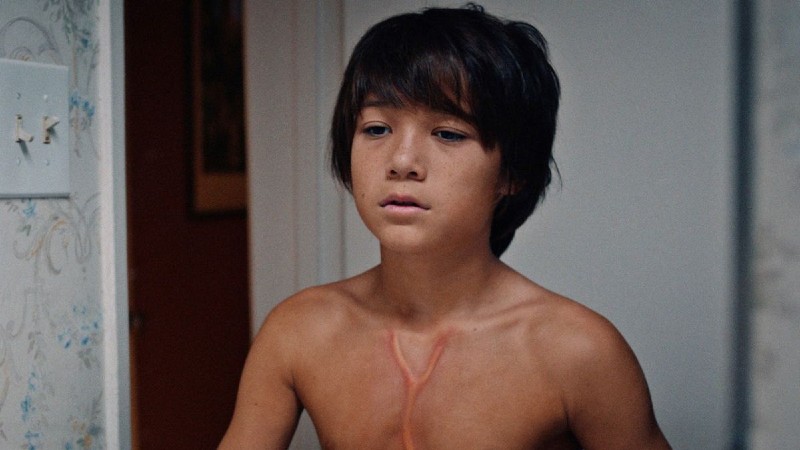 This taut minimalism is sustained by crawling camerawork, mercurial humour and sign language. More so than the bombast of A Quiet Place (John Krasinski, 2018) the silent setup is milked for maximum tension, before bursting into waves of 1980s synths (there are other instruments, guys). A much more effective application of the played-out time period is the lighting, the corridors illuminated with retro lightboxes and iridescent fish tanks that cast an eerie glow and spooky shadows over the confined setting. Some of the visuals are hokier in the design of the Djinn itself, but the demon’s power is undiminished thanks to the authentic emotional elements.

Writers/directors David Charbonier and Justin Powell employ elliptical storytelling to strip the picture of extraneous detail. The only backstory is a recurring flashback that builds intensity and emotion, giving the moral climax the sting of a child’s tears. Economical in its use of sound, space and resources, the feature wrings more feeling from its bare-bones premise than most horror flicks manage on a studio budget. In an era of Hollywood flatness, The Djinn is just the tonic.

The Djinn is in cinemas on Friday, September 17th.