"Filthy genius movie"
Two sisters are forced to reconcile with some memories of their mother in a deeply lyrical movie about modern Northern Ireland - in cinemas on Friday, September 3rd

It would be remiss of us not to begin this review without making a comment on the untimely death of lead actress Nika McGuigan. The 33-year-old actress died in 2019, following a short battle with colon cancer, which delayed the release of Wildfire, the deeply lyrical study of a Northern Ireland untroubled by war. McGuigan plays Kelly, a woman who returns to her home-country after a protracted absence, buoyed by the will of a saint, and deep rooted desire to meet her sister. Struck by a pilgrimage to rediscover herself, Kelly unearths a chest of buried memories, culminating in a quest for self-identity. It’s a singular, soulful performance that’s fitting for a film that’s based almost entirely on identity.

She likes to swim, and spends much of her time bathing in the river, tipping herself over from the North to the South. The boundary, she tells children, is invisible, but that doesn’t mean it’s any less valid. Meanwhile, her sister Lauren (Nora Jane Noone) struggles with her own invisible boundaries, aching to forgive a sister she had long thought to be dead. Their parents grew up during The Troubles, the sisters are rattled by Brexit, and their bond is beginning to loosen after years spent apart. It’s only through music that they begin to trust each other, and the two chuckle during a rendition of I Saw Mommy Kissing Santa Claus” Driven by a desire to reconcile, Lauren is nevertheless pushed further to the precipice of insanity when her co-workers cast aspersions of over her intentions, and the sudden reappearance of her long lost sibling. 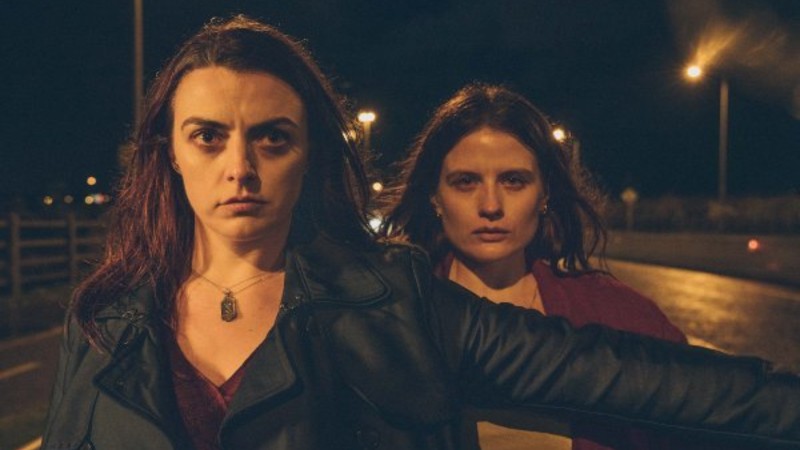 Together, they dance to Them’s standard Gloria, shaking off any false illusions they may hold to a town that classifies them as “weirdos”. Outside the border is a larger Ireland that celebrates their heritage, but also provides them a chance to start again. Before they can do that, they arrive at a pub where the man who killed their father is found happily imbibing a pint. Everywhere they turn, another fiery charged comment brings up another unwanted memory, and only by supporting each other they find the strength to carry on marching. But while Lauren carries the burdens, Kelly seems happier to cast off her troubles through a series of handstands, chants and repartees.

Beautifully directed, and produced with a great reverence to a country undervalued by Britain and the Republic, the film now doubles as a tribute to an actor gone before their prime. By eerie happenstance, she recalls the deaths that drove her character’s mother to near breaking point. In the light of her passing, the scene has an added pathos, but there’s no denying the commitment to the craft. Agile, animated and nakedly vulnerable, McGuigan’s performance is a career-best one.

Wildfire is in cinemas across the UK and Ireland on Friday, September 3rd: