"Mostly clean movie"
A DJ and his sidekick share scary stories with their listeners, and there are some treats amongst the tricks – from FrightFest, and on Digital and DVD 4th October.

Anthology films are wrapped treats, but whereas we pick the treat we want from the assortment box of chocolates, we can never be sure of what treat the filmmakers have in store for us next. Will it be a haunted house story, a woman terrorised, kids preyed upon by evil or supernatural forces, a gruesome slasher, or a suspenseful treat? If the stories are consistent excitement is sparked, an urgency to make the most of each short story, but if not, the accumulated disappointment feels laborious.

In Scott B. Hansen and Desiree Connell’s American anthology Bad Candy, it’s Halloween in New Salem. DJ Chilly Billy (Corey Taylor) hosts the annual Psychotronic FM Halloween show, with his sidekick Paul (Zach Galligan), who share with their listeners scary stories. The nightmarish tales include the story of a girl who rids herself of her abusive stepfather, one woman’s sexual encounter with a corpse, murder in a toilet stall and a trickster who gets a taste of his own tricks.

Many of the characters who have been at a Halloween party know one another, or are connected through other people. Each experience is their own ordeal, and there’s something satisfying about seeing these crisscrossing stories. It’s not the intimacy that creates this feeling of satisfaction, it’s the playfulness of a mini-universe being forged in small town America.

Pitched by FrightFest as “the best Halloween anthology since Trick ‘R Treat”, it does its predecessor an injustice to mention it in the same breath. Bad Candy begins well enough with the story about a girl who can manipulate her reality through her drawings, or the trickster who falls foul of a more deadly trickster. A moral through-line is introduced that the directors attempt to thread, but it’s never ambitious enough to find creativity in the strange twists of fate that can condemn immorality in the genre. 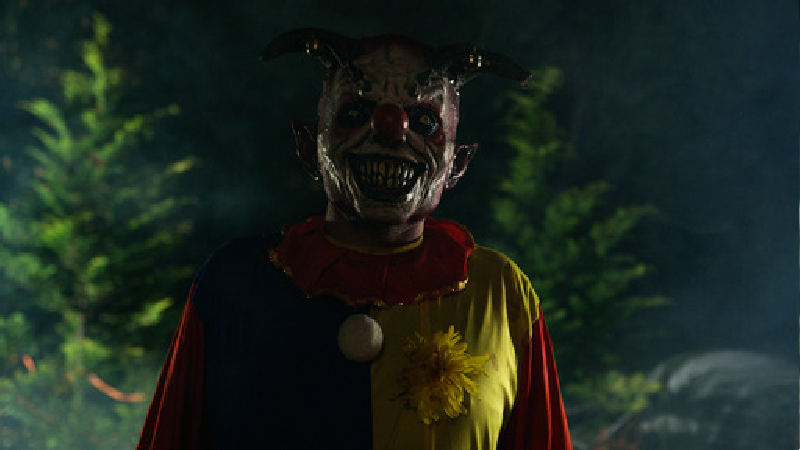 We’re far removed from the storytelling around the camp fire. When we think of sitting there, the warmth of the flames in the cold night air, there’s an emphasis on building the story, the suspense, the anticipation. This is largely absent here, and there’s a lack of nuance.

It leans into concepts and too often abandons developing the stories, and when they do, we’re left to feel that the concepts are more satisfying. Hansen and Connell struggle to overcome teasing a bigger idea if they’re unable to explore it in the time restrictive short. The opening story with its mix of childhood innocence that’s darkened by the adult world, and the predatory presence of the supernatural, is aching to be developed.

At its lowest, Bad Candy is an unapologetic exhibition of nastiness and titillation – two gruesome murders, and two female characters positioned as sexual objects for the male gaze. The one dressed in a nurses uniform grinds atop of a corpse, while the other dressed in a police uniform, fights off her tormentor.

It’s difficult to not question this objectification as society continues to struggle with its patriarchal heritage. We question whether we should expect and ask for more, yet there’s a pleasure in the simple horror of murder and survival. The scene with the corpse is played out with an intentional combination of black humour and horror, and the latter woman tormented by a childhood friend in a MAGA hat, could be seen as a metaphorical insight into privileged American masculinity.

Bad Candy is a reminder that we can be simultaneously entertained and frustrated by the familiar, but at its heart, there’s a side to horror that’s about creating a morbid and violent arousal in its audience. Horror isn’t always comfortable, nor is it sensitive. It’s a genre that’s provocative, but beneath that provocation there’s an intent to turn the horror into laughs and smiles, or make a point, whether or not it’s particularly insightful, which here may at times be the venting of anger over America’s recent ordeal. The greater frustration is that our wait for the next great horror anthology is not over.

Sweetie, You Won’t Believe It

FrightFest’s first ever entry from Kazakhstan is a splatter flick with the title and setup of a screwball comedy. [Read More...]