Sweetie, You Won’t Believe It

"Dirty gem"
FrightFest’s first ever entry from Kazakhstan is a splatter flick with the title and setup of a screwball comedy.

A beleaguered husband (Daniar Alshinov) grows sick of his pregnant wife’s (Asel Kaliyeva) incessant bickering and runs off on a fishing trip with two haphazard friends (Yerkebulan Daiyrov and Rustem Zhaniyamanov), where not knowing how to fish becomes the least of their worries.

Pitched as “Carry On Deliverance, Kazakhstan style”, this gory comedy is deliriously entertaining and deliciously subversive, an ultraviolent farce about marital strife, backwoods violence and sex dolls. Like One Cut of the Dead (Shin’ichirō Ueda, 2017) it combines bodily fluids, hilarious slapstick and genuine heart, affording growth to each of its loveable oddball characters (or at least the ones who survive) – one of whom faints at the sight of blood, of which there is plenty. 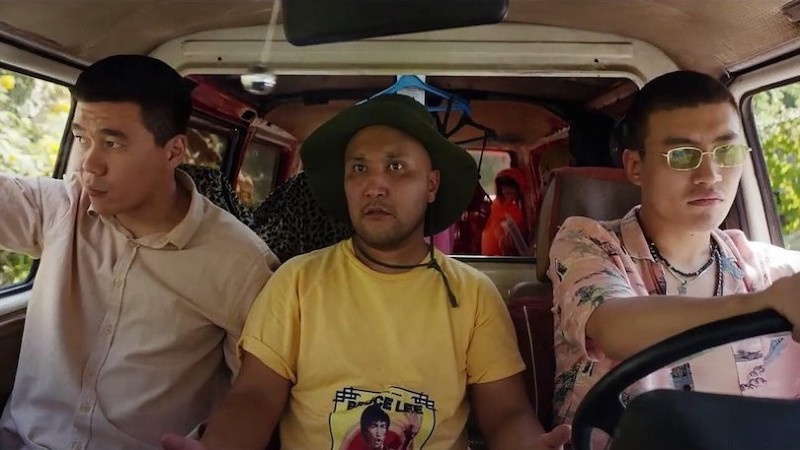 Because the tone is so amiable and welcoming, we feel invited in on the joke and lulled into a false sense of security before the body parts start to fly. Running gags and actual gagging maintain the momentum for the short and sweet duration, never letting up the tension nor holding back the gore, which is brilliantly executed (literally) and spewing with comic creativity.

Funny, frenetic and always off-kilter, Sweetie, You Won’t Believe It is eccentrically Kazakhstani yet universal in its humour and humanity; the story of a man who tries to escape his responsibilities and ends up forced to confront his problems head on (or possibly off). Through uproarious performances, crazy choreography and a killer soundtrack, Yernar Nurgaliyev delivers the best hillbilly horror since Tucker and Dale vs Evil (Eli Craig, 2010), and the funniest thing to come out of Kazakhstan since Borat.

Sweetie, You Won’t Believe It has just premiered at FrightFest.