The Power of the Dog

If anyone had any doubt about the difficulties women directors face when trying to get films made, Jane Campion’s career should be a compelling case to answer. The woman has won an Oscar, won the Palme d’Or and directed consistently brilliant work as diverse as period dramas and serial killer movies. But nevertheless, despite this pedigree, getting her projects to the big screen has proven enormously difficult. So a lot is riding on The Power of the Dog, her adaptation of Thomas Savage’s novel, which shows in competition at the 78th Venice Film Festival. What we get is a solemn compelling Western which is full of grandeur pitched against cruelty and small minded pettiness.

At its heart, it is a tale of two brothers. When Phil (Benedict Cumberbatch) raises his glass in toast to himself and George (Jesse Pelmons), and characterises them as Romulus and Remus, you can’t help but wonder if he knows how the story ends. Later it will become clear he does. Because though Phil has invented himself as a dirty saddle tramp rancher and cowboy who has never used the house bath and whose only pleasure lies in twanging the banjo and recalling his mentor Buck, he’s actually a graduate of Yale with a well to do family at his back. So, yes he fully understands that he might as well have hailed his brother as another Abel.

George is a good-hearted lunk who falls for Kristen Dunst’s mild widow Rose, marrying her and bringing her and occasionally her almost adult son Pete (Kodi Smit-McPhee) to the ranch. Phil immediately embarks on a campaign of unrelenting hostility, bullying her in any way he can and mocking his brother’s attempts at domesticity. On returning to the ranch for the summer from boarding school, Pete is at first also victim to Phil’s homophobic taunts, but an uneasy truce springs up between them as Phil finds Pete has a deeper insight into him and the landscape around him than anyone else around. 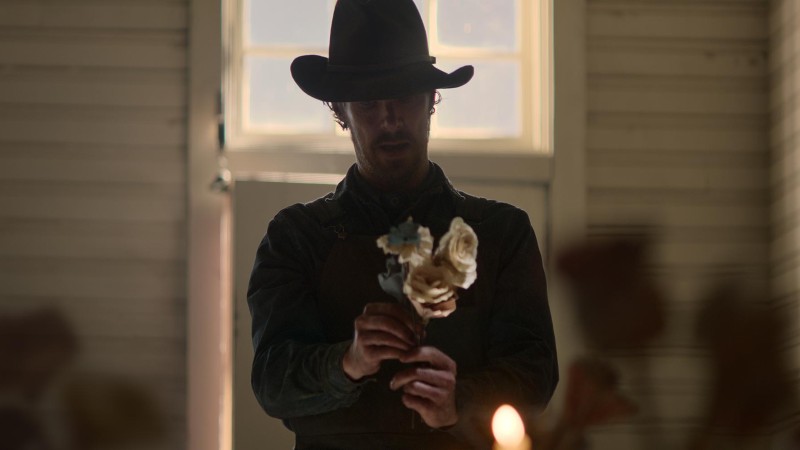 All Westerns are end-of-the-west Westerns. That’s what the west is. It’s where the land ends. It’s where the sun goes down. In Campion’s film, Phil sets himself up as an authentic figure of the West, but there’s more cosplay to him than cowboy. He has fetishised the dirt and the wild in order to help him deal with his own queerness. This is what he saw in his mentor and what he sees in Pete. Even the cattle ranch is something of an uneconomic folly. Phil burns the hides he can no longer sell. It’s like he’s built his own Westworld. And cruelty is at heart disappointed romanticism.

Which makes the film easy to admire but difficult to like. It’s never quite clear if Benedict Cumberbatch is unconvincing as a hard as nails cowboy because Phil is unconvincing or because Cumberbatch has been miscast. With a striking score by Jonny Greenwood and Ari Wegner’s sublime cinematography, Power of the Dog demands comparison with There Will Be Blood (PA Anderson, 2008). But Cumberbatch is no Daniel Day Lewis (to be fair not even Daniel Day Lewis is Daniel Day Lewis if you know what I mean). With so much riding on the ambivalent power of the central character, paradoxically we end up knowing too much about him and not enough. One wonders what would have happened if the two brothers had swapped roles.

Perhaps it’s churlish to criticize a film about someone unable to love as unloveable. If there’s a heart in this heartless world it is Rose’s, though battered and sodden in drink. Her decline at the hands of Phil (what is it with these names as well?) is rendered movingly even as it shows up the limits of George’s apparent willingness to help. It’s easy to throw in the overused phrase “toxic masculinity”, which is a defining characteristic of the Western. But what Campion has achieved is a troublesome film, a story and characters that gnaw and confound, against a landscape that can look like heaven, or a savage beast depending on the play of light against the hills.

The Power of the Dog premiered in Venice, when this piece was originally written. It showed in October at the BFI London Film Festival. In cinemas on Friday, November 19th. On Netflix on December, 28th.