"Greasy movie"
A viral pandemic turns the infected into bloodthirsty zombies, in this Taiwanese horror with abundant blood and limited vision - from FrightFest

Many films at FrightFest deal with the pandemic but this is the most explicit, in every sense; a Taiwanese virus movie about a plague that makes people multilate, rape and eat each other, a little bit like The Crazies (George Romero, 1973) on bath salts. It starts on familiar ground (a sniffing neighbour, whispers of the flu, screams of a hoax) and before you can say, “let the bodies pile high”… they have.

Taipei is awash with health warnings, conspiracy theories and – by the time Kat (Regina Lei) catches the train to work – blood. After politely declining the unsolicited advances of a creepy commuter (Tzu-Chiang Wang) all hell breaks loose, and he spends the next 90 minutes intent on taking from her what he feels entitled to as a once respectable businessman, now a rabid rapist with eyeball juice on his umbrella.

Outbreak movies have always been analogies and here the (other) real pandemic is sexual violence, presumably the sadness of the title. The point is made in orgiastic feeding frenzies, that time’s up in more ways than one. Through Kat’s eyes we view systemic abuse as the promise that one of these days we will wake up to find society has eaten itself, and it won’t be pretty. 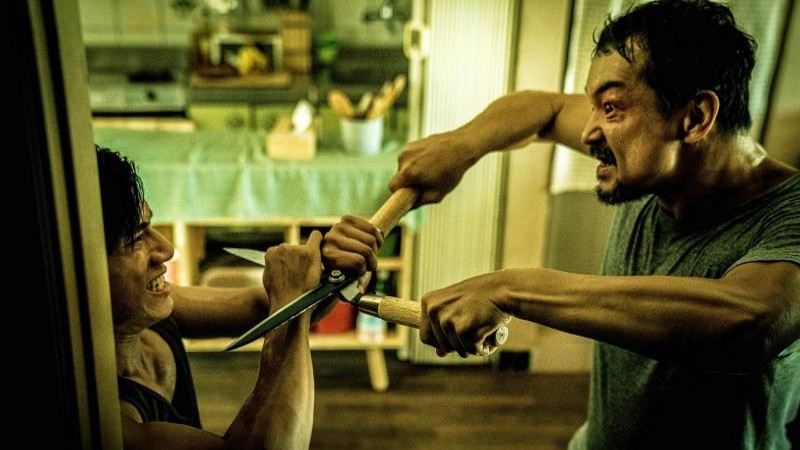 The violent images and body count rank among the highest in the genre (writer/director Rob Jabbaz insisted on virtually limitless blood from the SFX department), making for a gorefest of biblical proportions. Jabbaz depicts a society a cough away from carnage, driven to act out our most depraved instincts by the mere thought of having to wash our hands. Like another FrightFest offering, No Man of God (Amber Sealey, 2021), The Sadness concerns the fine line between imagining something and actually doing it. The difference is that this shows the lot.

Because the carnage goes from zero to zompocalypse in a matter of minutes, it almost deescalates after the beginning (and brilliant) train-based bloodbath. A lack of plot or characters means that after the initial shock value has worn off there is nowhere for it to go. The practical effects are incredible and the gore relentless (though Jabbaz mercifully refrains from showing the worst of it), but the violence is so over the top as to be unrealistic; a stylistic choice that lessens its impact.

As a result, the most graphic film at FrightFest is far from the scariest or most disturbing. With universal satire (“No one trusts doctors anymore!”), a sick sense of humour and the best exploding head moment since Scanners (David Cronenberg, 1981), it dares to go anywhere except somewhere interesting; a case of unlimited blood yet limited vision.

The Sadness has just premiered at FrightFest: