No Man of God

"Greasy movie"
Sentenced to death by electrocution, serial killer Ted Bundy continues to manipulate the media, prosecutors and his own counsel up until the bitter end - crime drama starring Elijah Wood shows at FrightFest

Not to be confused with the Netflix movie about Ted Bundy with Zac Efron, No Man of God details the final years of Bundy’s life on death row, as seen through the eyes of FBI analyst Bill Hagmaier (Elijah Wood). Based on transcripts of their conversations and accounts from the criminal profiler (a relatively new job in 1984), it depicts the interviews where Bundy (Luke Kirby) sort of helped the Bureau catch other serial killers but mostly just messed with Hagmaier’s head.

Bundy’s manipulation of investigators was notorious, which might explain why these scenes bear such a striking resemblance to the way Hannibal Lecter toys with Clarice Starling in The Silence of the Lambs (Jonathan Demme, 1991); at one point Bundy even asks Hagmaier about his father, prompting a story about said father killing a rat and the chilling silence that followed. It is not a traditional horror movie but a staunch slice of true crime, albeit unusually provocative in its psychosocial elements.

Made up entirely of conversations in bare interrogation rooms, No Man of God could easily be a play, save for Amber Sealey’s intense use of close-ups. Though it breaks a major rule of storytelling, the decision to describe rather than show the violence is effective. There is a big difference between seeing and imagining brutality, and most people probably haven’t done as much of the latter as Bundy insists. For the psychopath there is no real difference between thinking something and doing it, so he claims that everyone is capable of committing his crimes, presumably not understanding the desire not to hurt people. 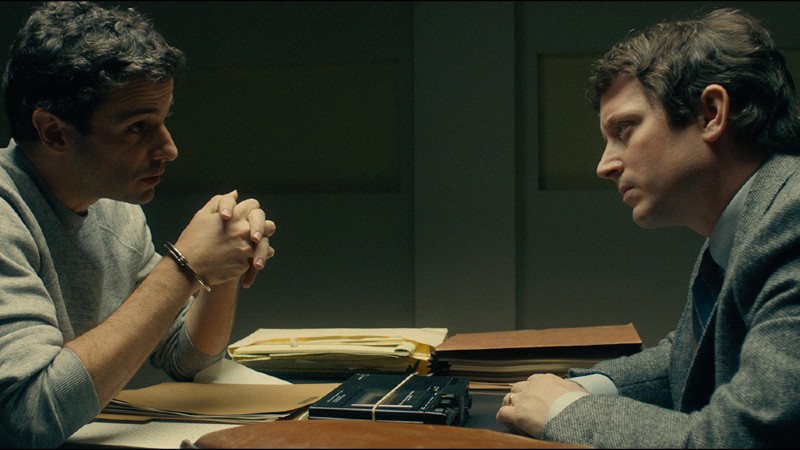 That is where the film brings in the death penalty, Exhibit A in Bundy’s case against humanity. As it turns out, it is easy for a film like Just Mercy (Destin Daniel Cretton, 2019) to oppose the death penalty on the grounds of racism and false imprisonment; having that debate in the context of one of America’s most prolific serial killers truly tests the mettle of those liberal convictions. The media circus around his execution is further evidence for Bundy’s worldview, as he watches the news reports of people wearing “Burn Bundy Burn” t-shirts and responds: “And they say I’m crazy.”

Sparks fly between the terrifying Kirby and wide-eyed Wood, seduced into an uncomfortable friendship by the killer’s charm and intelligence. Even in his final days on death row he continues to manipulate the media, prosecutors and his own counsel, running the show like some kind of political campaign (in which he had real-world experience). The result is not a particularly subtle film but it is a disturbing one, which gets under Bundy’s skin probably about as much as one can without breaking completely.

No Man of God has just premiered at FrightFest.

Riley Stearns’s third movie is a continuation of the deadpan style of his earlier work, with a dystopian sci-fi twist; it stars Karen Gillian and Aaron Paul - from the Sundance Film Festival [Read More...]